Apples, Potatoes and a Fat Lip.

I've started making a working list off of The List (can you tell I am obsessed with lists?) that I can tackle over the weekends.  I mean, some of this stuff HAS to get done!  I am happy to say that I got all but three things done, and one of those was struck off - stop at a feed store for dog treats and canned cat food.  After my mother's remark that Lovey looked "like a loaf of bread", she is on a diet.  And so am I, in solidarity.  I have also decided to cut back on the feral cat food output, by giving them a can of wet food every other day, as opposed to every day with their kibble.  I might change that in the winter, depending on how they seem to be faring.


I weeded a couple of raised beds and pulled the pathetic bean plants.  I also harvested the potatoes.
As with the rest of the garden this year, it was a disappointing harvest.  I do buy my year's supply from a local farm, but there is nothing like growing some of your own to tide you over.  This year I planted only two kinds:  Red Norlands and Bintjes.  I have had a great deal of success with the Red Norlands.  Until this year.  A very small harvest - both in size of the spuds and number of the little devils.  My Bintjes were much better.  This is a potato that I discovered while living in The Netherlands and was thrilled to find organic seed potatoes here.  I probably got a 8:1 ratio of seed potatoes to harvest potatoes ~ yay!


I also got the electric net fence up for the sheep, so that they could graze the hill.  I don't worry too much about them starving - as my mother would say, they are very loaf-shaped.  Linden is very much akin to a blimp on toothpicks.  Since all three are together at all times, it is very difficult to sort out any type of different feeding regimen.  Linden tends to fat (I can feel his pain), while Norman is like a pony and needs more protein.  The llama, of course, needs more than either of them.  I was very lucky to get a call from a neighbor who has an early apple tree that was dropping apples like crazy.  They are in the process of moving out of state, so they wanted to know if I'd like the drops for the animals.  I hotfooted it over and collected two five gallon buckets-worth!  I have been giving them apple treats since then.  Norman, however, will only eat apple peels.  He is an odd duck.


Speaking of apples, on Saturday, Lovey and I whizzed through my errands, stopping at my friend, Marianne's, to drop off eggs.  She, in turn, gave me 12 pounds of an organic, heritage apple called State Fair, and a large bag of gorgeous RIPE tomatoes.  OMG.  On my agenda for Sunday was:  finish washing front of house and applesauce!  I also managed to bake some apple muffins for the barn - a hit, since over half the dozen disappeared in the first five minutes.


Before venturing into the kitchen on Sunday, I had to run the weed trimmer under the electric netting and get the sheep out.  As I yanked furiously at a stuck gate, it opened.  Fast.
﻿ I am very thankful that the wire fence missed my face and that all I got was a fat lip from the impact of the PVC frame.  Lovely.


One of the reasons I was looking forward to applesauce-making (other than the finished product) was that I would finally be able to use my birthday present to myself - an apple peeler/corer/slicer!  I had not opened it since I got it at the beginning of the year.  When I did, I learned two things:  Quit being so cheap and there should be a law about seeing the instructions online BEFORE buying a product. 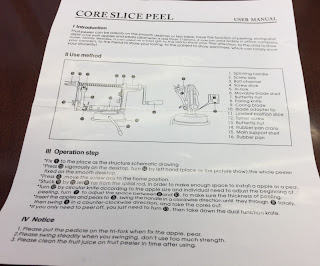 I knew I was in trouble as soon as I laid eyes on the 'instruction' sheet.  It's bad enough every cotton-picking-thing you buy is made in China (my "Cheap" lesson), but for Natssake, couldn't they hire someone who is at least reasonably fluent in English to write the instructions?  You can biggify, but here's the gist:


"III Operation Step:  *Fix (1) to the place as the structure schematic drawing; *Press (15) vigorously on the desktop, turn (14) by left hand (place as the picture show), the whole peeler fixed on the smooth desktop; Press (4), move the screw axis to the home position; *Stuck (15) by (11), let (6) far from the spiral rod, in order to make enough space to install an apple or a pear", etc.  Please note:  Please put the pedicle on the tri-fork when fix the apple, pear.


Many bad things were said - in English - in the kitchen that morning.  I finally figured it out by trial and error.  I like the process but now hate my peeler.  However, Norman is very happy that he had quite a large bowl of peels - in varying degrees of length, width and depth.  I had, apparently, neglected to put the pedicle on the tri-fork.

Lol...I know exactly what you mean with the instructions from China...whoever translates probably uses an online translation tool, those are horrible! I had an apple corer/peeling once and I LOVED it!

Oooh, a diet in solidarity...that's a tough one. Alex has a very sensitive digestion and we go on clean eating days a few times a month, you know, just chicken broth, boiled chicken and boiled potatoes. That's hard enough to do for one meal for me!

I'm going to be harvesting my two garbage bins of potatoes today or tomorrow, I think yours look great!

I have never had an apple peeler of that sort. Mostly because I am cheap. I stick with the old fashion stuff, sigh. My third oldest granddaughter calls Calli my Border/Aussie a "meatloaf". Well I never patting her "ewe not fat ewe fluffy". I jotted down the Binjte name so I wouldn't forget it as I love homegrown potatoes.

Ouch on the lip that must of been painful. But good for you all you got done in such a relatively short amount of time!

My kids love homemade applesauce and eat it almost as fast as it gets made. Somehow, I ended up with that very same model of apple corer/peeler. Being male and an engineer, I never read the directions and have pretty good luck using it over the years and it has held up way better than I thought it would. Sometimes, even China can get it right, that is except for the translation on the instructions.

well, i guess a pvc hit is better than being punched. but still...ouch! i have one of those peelers though mine is american made. no easier to figure out how to use it though. every time i use it i have to have the blog tech come and show me what to do!

Your poor lip! I'll be canning this coming weekend, but I use a canning food processor with cooked apples. I takes out the seeds and most of the skin, leaving a nice applesauce. I give the chickens they rest and they love it! I'm looking forward to lots this year, since we had a small harvest this last year. I make mine chunky :) Nancy

Those instructions were a hoot! I always read instructions. Husband never does. Show us the finished device when you get it all put together. -Jenn

I am excited to see the results of your potato planting! We'll see how 'solid' I am on this diet. (Geez, nothing like a close-up to accentuate the wrinkles that you've been trying to ignore...)

I have to admit that I fall back on my old standby every time. Once I did get it set up correctly, it did whiz through the apples, though. I LOVE the 'ewe not fat, ewe fluffy'! It is now my motto! I order my bintjes from a small organic potato grower in Maine. When it comes time to plant, email me if you'd like their name.

Wow! A double whammy - male AND an engineer! You could probably build a better one. It seems like it's solid, so I am hoping to use it for years.

I like my applesauce chunky, too. I have a Roma tomato/apple processer but it comes out too smooth. If it's too smooth, it reminds me of baby food!

The next time I process some apples - will be soon - I will take a picture of it in action!

I am in total denial of any wrinkle and nobody can make me admit I have them lol...

My desk chair needed to assembled and the directions where a hoot. At the end, once everything was together it showed a pic of the completed chair and the words "Behold!" underneath. Gene and I still laugh over it and you can be sure "behold" has made it into our lexicon.

yes please I will be in touch!

I think I may steal a page from your lexicon - "Behold!" is a wonderful word!