Seeing as it's Monday and I'm happy to be at work, that should give you the flavor of the past weekend.  Let's do this in stream-of-consciousness style.


I found very reasonably-priced ($1.39 vs $4.07) graham crackers at Aldi's that seem to be larger than the puny things rattling around in the Honey Maid box.  My sister took me to Aldi's to distract me from my $1300 oil change.  It almost worked.  Kidding.  What did help was spending a good two hours drilling, inoculating and waxing shitake mushroom logs with Marianne and her husband.  There's nothing like doing physical work to save you from the chaos that is your mind.  This will cure me of that smug feeling I had when my fuel oil tank was filled for the third time (being the first time EVER I've had to do this in the 12 years I have lived here), knowing my tax return will take care of it and thinking it would also take care of buying fencing and fixing the pergola.


The pergola came down Sunday, after one too many high winds and took the birdfeeder, gate and Tibetan prayer flags with it.  I was out the door, tout suite, to gather the flags and hope there is no dishonor or bad karma being aimed at my head, because I have had enough.  I waited two hours for the guy who was to take it apart and reassemble it (at some future date) to be 'right over'.  I reached the transfer station to find that I was out of tickets - thank goodness I have bestowed baked goods on the crew because they let me drop the recycling and trash off with the promise of a ticket next time.  Harumph. 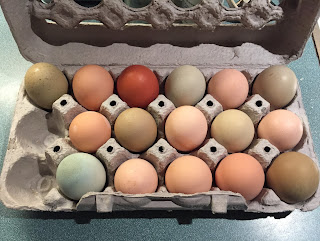 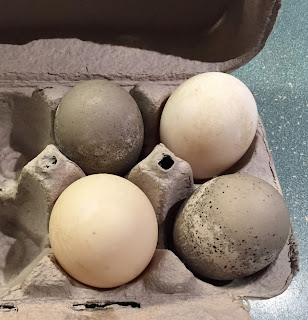 HOWEVER, the ducks and chickens are either as dense as bricks, or know something that I don't.  I've been getting between 10-14 chicken eggs and 1-3 duck eggs every day.  If they think it's spring, they've got a leg-up on me, as it snowed off and on all weekend and the temperatures are below freezing every night.

Mr. Butters has a vet appointment this afternoon because he is allergic to something and I'll be damned if I can figure it out.  I've changed his food multiple times, I've changed the laundry detergent.  I vacuum every other day.  He has been bathed.  I'm stumped.  I am actually hoping that they run an allergy test on him because, hey, I never get out of the vet's office for under $200, so why start now and I'd rather know.


Since it's too early for whine, I'll cease.


I tried two new recipes this weekend and they were both worthy of a repeat performance.  One was Lentil Mushroom Stew over Mashed Potatoes (touted as as good as a hug - and sweetlouise, did I need one!) and the other was Baked Eggplant Parmigiana, which was surprisingly easy, since you slice and roast the eggplant first.  I was all about comfort food this weekend.

Oh dear, you had a helluva weekend. Things will be better this week, I'm sure!

i don't know about you but we will reach 80 degrees on friday. it's snowing here now.

All that you did with shitake mushroom logs.. Don't know what it was, but good that it helped. :-)

Love Eggplant Parm! You roast the eggplant slices. Here, they are "fried" after coating.

Animal allergies. Rain went through a bout of that. Sighhhh...

Yes, I've gone from TGIF to OMGIF. But it can only get better, right?

That's not in our forecast - what weird weather! But I bet your puppy is happy!

Oh my gosh Susan, what is going on??? Your pergola! I'm so sorry about that and that huge bill...I hope PB's mystery allergy is discovered...our cat Oscar has a mystery allergy and we did everything you did, food, detergent, I did that deep cleaning...we even changed the litter. We think maybe he's allergic to one of the dogs but there is no way to know. He's on prednisone for life it seems. We hope that when we move he'll be better. I do hope that you feel better soon and all the bad luck finally ends. Your meals sound delicious though, comfort food works! xx

It certainly was! I can do without another like it, that's for sure.

I know! These allergies are a mystery. Maybe PB is allergic to the cat! Well, he (we) will have to tough it out - the cat stays. :) This kind of stuff always happens in clumps. I'm hoping the worst of it is over. Time to pull out the Pollyanna glasses...

Oh dear. Look at that snow too. It's snowing here as I type this comment. Not a lot, but snow in spring. Ugh. Hopefully you can figure out that allergy too. Our cat had to take human allergy medication for an allergy (also unknown), because they don't make allergy meds for cats.

I've been giving him Benedryl but I'd like to find out what's causing it - if possible. He's got a rash under his little chicken wings, poor laddie. And what's with your snow? This is going to be a short and intense gardening season!

You're not sharing any people food that contains mushrooms with Mr. Butters, are you? We had a dog once with a severe mycotoxin problem. Hope you get it figured out soon.

"Planting" some shitake mushrooms has been on my list for awhile. Reading this reminds me I really need to cross that off one of these years.

Removing grains and other allergens is not always the cause. Sometimes it is the protein. They have a hydrolyzed protein food now. The protein molecules are made so small so as not to cause a reaction.. Poor little man. Stella suffers with seasonal environmental allergies. Cortisone spray works reasonably well for her and aloe wipes after she's been outside.

Enough all ready with the snow. I am so sorry about the pergola fail. What a snow year you guys have had.

Oh Susan, I wish I could lighten that load!!! Maybe Mr. Butters is allergic to cats. =8-l

Hi, Charade. No, they get very little people food and never mushrooms, onions, etc. If they are lucky, they get to lick plates!

I did a mushroom course and it is really fascinating. M & C do it on a farm level - they have about 130 logs that are due to fruit from last year's efforts, plus these, plus oyster mushrooms in their cellar and a crop of wine caps to die for!

I tell you, there are so many things that could cause it. He got a steroid shot and we are going to wait and see how he does. If that doesn't work, then it's a full allergy panel work up. Chaching. I like the aloe wipe idea. I think I may use them on their paws. I was quite upset about the pergola, but it can be reassembled (with modifications - like BRACING) without too much fuss. It was just one more straw on the camel's aching back.

Michelle, you are such a dear. I had that same thought! That would be, as they say, tough toenails, because Slimmie is here to stay.

Now I can't get that tune out of my head....and most definitely an adult beverage or twelve.

The ducks and hens are inspirational, just ploughing on pretending it's Spring regardless of all the proof to the contrary.