One of the (many) glaring problems that plagued me last year was my almost total lack of organization and planning.  It invaded my garden, my eating habits, you name it.


With a clean slate at the ready, I began my new organized life.  I planned my meals for the week.  Baby steps, you all, baby steps.  The biggest problem is breakfast - I may get up before the crap of dawn (as Kay used to say) but that's my time to squeeze in knitting and other handcrafts.  The advantage being that all the furred things are still sleeping.  By the time I feed everyone inside and out, I barely have time to get myself reasonably presentable and out of the door.


I had gotten in the habit, briefly, of using make-ahead steel cut oats - but that, too, dropped by the wayside.  It's back.  Yesterday I:

Made my favorite non-meat spaghetti sauce:


Made my favorite vegan peanut sauce.

Made five mornings of steel-cut oats.


I should be set until the next weekend.  I did not get pics of the rest - there were too many distractions during the process.


The biggest distraction was Lovey's Christmas toy from one of her aunties.  We were fighting over it. It was back-ordered, as they can't seem to make them fast enough. 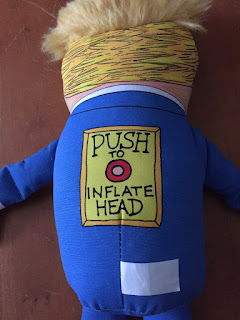 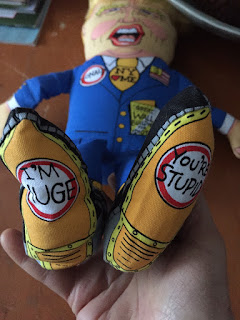 Also on my list of How to Build a Better Me was to make it to the library at least every other week.  No more buying books - part of my No Spend Year.  I lucked out and got a freebie from my mom - we have our own lending library within the family. 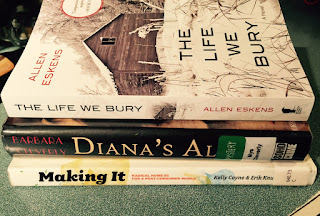 And, in case you are wondering, I did, indeed, jettison 365 things from my house last year.  As a matter of fact, I exceeded that number by a few.  I am in the (slow) process of cataloging them and will, at some point, put them on a separate page.  In case any of you are having trouble falling asleep at night.

perfect toy! i want to grab it and shake it and rip it apart.

I'm only borrowing books from the library now too!
And IF there is a truly excellent one I know I will read and reread often, I put it on my Amazon wish list and my wonderful kid gets it for me for Christmas or birthday. I really only like 2 or 3 books a year THAT MUCH.
Impressive purging last year. A gold star for you!!!

Slow is good. Huge congrats on the purging-I hope you rewarded yourself. As you know I love my library but I am being a bit cautious as the pups have discovered the pleasure of books.

Sue - I need to have a physical book to read. I tried doing the Kindle, but it's not the same - I have no place to put my favorite bookmark!

Susan - Lovey used to 'read' any books left unattended when she was in her anxious mode. Thank goodness she grew out of it!

P.S. They take a shot at everyone!

Love that toy! Here's to our no-spend year. I'm trying to use the foods I have and buy less of that, too. Last night I considered my available ingredient options, looked in my favorite cookbook (The Enchanted Broccoli Forest), and came up with Russian Carrot Pie. It was delicious!

Michelle - I have that cookbook and your pie looks fabulous! I will have to look up that recipe. I love all the Moosewood, older vege cookbooks - I need to use them more often.

I agree---I am not interested in owning a Kindle. I love the REAL thing!
Also was wondering where I might pick up one of those "dog toys". I don't have a dog, but have the urge to rip to shreds a toy once in awhile--especially if it looks like that!!!

I could never do a no spend year. I'm such a shopper, spender, willy-nilly money handler. I love to spend, spend, spend. After all, it's only money.

Well, you can see my one glass of wine has gone straight to my brain cells. In reality, I never buy anything that's not on sale and then only if I really, really need it. I may have been called penny-pinching a time or two. If you need someone to talk you down off the spending ledge anytime, just give me a call.

BUT if I had a dog, I think I would buy that doll of Lovey's.

I love make ahead oats, I use plain greek yogurt and bananas in mine. No spend year! Wow, good for you! The street I live on has a Little Free Library which is great for leaving or taking a book.

You made me laugh when I saw your picture of the dog toy.
Funny how our furbies have favorite toy's they can't seem to live without. Since our washer is busted, and it hasn't been replaced yet. I drove into town to the laundromat with a basket of clothes, 3 dog blankets, and one of those nylon bags with a zipper on it full of the popular dog toy's (cloth ones) to wash. When I came home the dog went crazy for his toy's (like it was Christmas again).... he is such a silly little thing!

I know it's hard to do everything, take care of animals, and go to work. Making that weekly menu makes things so much easier when dealing with food supplies, and you kind of know what your going to cook. I make a menu every Sunday, and it works for me. In fact, I have a grease board with every day of the week on it. I list the menu on this board for everyone in my house to see. Hoping they will start dinner if I'm late getting in, or busy doing something else. Every now and then the guys will cook................I keep praying they'll try cooking more often :-)

Keep up the good work on how to build you better, and spend less money. We all need to be doing this as well!

Sending hugs and love to you.
Sandy

I am reading Will Schwalbe's "Books for Living" and loving it. You would like it.
A friend was telling about a Yankee Swap and a talking Trump doll. Her dog barked at it endlessly in a threat full way. Telling us something we already know.