I have been trying to pack my lunch every day - I had started down that slippery slope toward, "oh, I so deserve to buy lunch today," but managed to catch myself before too much damage was done.  I don't know about where you all live, but here in Capitaland, lunch easily runs over $8 for something I could definitely make better myself.  It's crazy.


I had picked a handful of kale the night before and decided to make a massaged kale salad with dried cranberries, pepitas, sunflower seeds. and feta cheese.  I discovered a couple pieces of pre-cooked bacon in the freezer and added those - feeling extra virtuous because I had taken a (baby) step towards cleaning out the pantry.  I dressed it with a variation on Sylvie's Dressing, using some strawberry balsamic that my sister had found in the bargain bin.  Delish!


While I was flying high on virtuosity, I decided to tackle two new knitting procedures (to me).  I must have been suffering from temporary insanity.  I managed Judy's Magic Cast On, thanks to painstakingly slow progress to the stop/start of YouTube.  Then on to..knitting a pattern in two colors.  Lawsymercy.  I thought I had chosen a good, useful and easy-ish pattern with which to launch my new challenge.  Frankly, I doubt if there is a pattern created on this Earth that would have been easy enough. 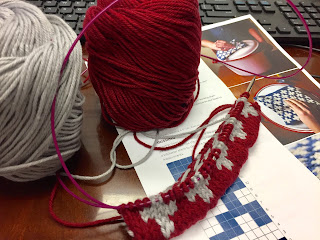 I dutifully shut my office door and turned on some music, so as not to offend tender ears that might pass by during the process.  Well.  Progress was made, but it was, as Bette D. said, a bumpy ride.


I'm looking forward to Friday (for many reasons) but, specifically, because we are going to try to have another go at The Sister Reunion without the power outage.  As I type this, there are severe thunderstorm warnings popping up on my phone.  Let's hope that Ma Nature gets it out of her system before Friday.  Hear that, girlfriend????

Every time you show a picture of one of your salads you take to work for lunch I wish you would make one for me, too. They always look and sound so good!

I think you're being way too hard on yourself regarding the two color knitting. Your piece looks great so far! I was reading just the other day about all the different ways you can cast on thinking I really oughta learn something besides the basic, simple one I've used for 106 years now. Maybe I should go check out the one you just did. Or maybe I should wait until November, eh?

You know what they say - misery loves company! :) I tend toward the easy and should try a few more cast on methods just to spice things up. If nothing more, it spices up my vocabulary...heehee.

I love Judy's Magic Cast-On, and your two-color project looks great! Remember, knitting is great brain "exercise," so you're fending off that old-age fog.

PS: Send US the thunderstorms; we need a good rain!

I agree Susan, the piece looks great! I have never done two colour knitting, so that Hudson's Bay blanket will be a first for me. I'm like you though, I tend towards easy. Your salad looks great! I remember in the old days when I worked in the city (and had money to blow, oh the regrets!!)...I used to eat out every day...easily $8 a day back in the early 2000's. It's tempting but when you calculate how much you spend on take out, it's staggering!

I hope you have a great time with your sister reunion! :)

Here's hoping all the rain goes away and you and your sisters have a bag-up weekend.

Ha ha, was the air blue in your office?

i am such a horrible knitter. even with youtube i don't think i will ever knit more than scarves. have fun with your sister!

We call those garbage salads. We use stuff our of the refrigerator before it goes bad and ends up in the garbage. They always taste much better than they sound.

I will try to remember that as I labor away... I wouldn't mind sharing some of this constant rain with you - not at all!

I work with a young fellow who buys his breakfast AND his lunch every day! Good grief! We always have a ball - lots of good food, bubbly and a riotous DVD!

So far, so good. The bad storms have gone north or south of us. I am hoping we can hang on to that luck for another day or two.

I call them my kitchen sink salads - as in, everything but. They are my favorite kind - it's amazing how leftovers can take on a whole new life in a salad!

Be proud of yourself Sweetie....you not only saved yourself some money, you ate very healthy from your own garden. I'm proud of you!!!! Eating in town (45 minutes to 1 hours away) will cost us here roughly $9 to $11 dollars. I pack my husbands lunch daily, and he goes out to eat maybe once a pay period to just get out of the office.


Nice knitting pattern, looks like you've got it down pat with no issues. I love the color combination!!!

That sounds like an awesome salad! I bring my lunch sometimes but I find it very hard in the summer to stay indoors for lunch..I end up going for a walk and buying lunch more often than I'd like.

I pack my lunch most days as well but we have a hospital cafeteria where I can get something really healthy for about $4. And lots of variety but it does add up quickly. Nice knitting!

Seriously? I think knitting must be the only thing at which you are not the best! I ended up with one sister out of two, but it was a lot of fun!

Hi, Sandy! Sometimes you have to treat yourself. But the food here (same distance) is not that great - and $8 to boot! I liked the colors, too. I am hoping that I can work out knitting with two colors that is not as awkward as I am right now.

Jenn - Luckily, downtown Capitalville is not all that attractive, so I am not often outside. However, that being said, it would be a lot healthier for me if I was.

Thank you! I might be more tempted to eat out if I could get something healthy at that price here!