When is a salad not a salad, but a hot/cold mess?

I am sure that is a question that rises to the top of your mind on a daily basis.  It does mine.  That should give you an idea of how exciting my life is.


We have segued into the time of year where every lunch is a salad by default.  As I was rummaging around my fridge this morning, mining various unmarked containers for potential lunch ingredients, it occurred to me that what I was creating might not be deemed a 'salad'.  Case in point:  Today's Salad 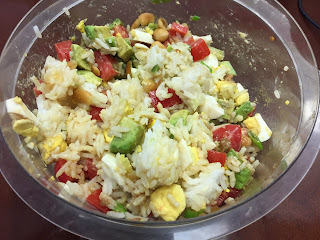 Leftover rice, sliced green onions, peanuts, avocado, chopped tomato, chopped egg, ginger sesame dressing.  There are times, I must admit, where the end result is - while not repulsive - odd.  This does not stop me.  I did draw the line at adding raisins to my 'salad', as the combo of tomato + raisin does give me pause.


Let's see.  What's new.  It's not raining yet!  This is the first day in over 10 days that I have not had to slog through the rain to do morning chores and try to reach my car without my 'style' dissolving.  Of course, it had to occur NOT on a weekend day, but a day where I can only enjoy it virtually - out my office window with a view of other office windows.  Not to worry, it will rain later today.  There is a slim chance that it may not rain at all tomorrow, but I'm not holding my breath.  At least this constant dismality has made it easier to harden off my seedlings.


What it has not done, however, is given me a chance to replace my raised beds.  I managed to get the cross pieces cut under the cover of my carport and I did transplant a peony, but that has been the extent of my outdoor activity.  That and scraping the square meter of muck that sticks to the bottom of my shoes every time I go out to do chores.


Enough about the weather.  Safe to say, it stinks. 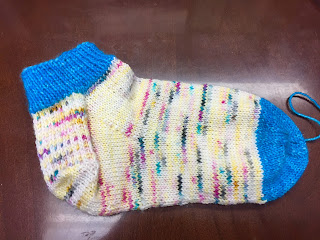 I am soldiering along on another pair of short socks and I managed to push my way (virtually) into a charity crochet-along with the home office.  Truth be told, it was listed as Knit a Square and, as always, I read no further.  Apparently, the home office is full of crocheters, not knitters.  Not to be dissuaded, learning to crochet has been on my bucket list (you will note that I have low expectations of the lead-up to my demise) so I volunteered.  I am relieved that I am going to be at the end of a phone line, as my crochet speed is still in first gear.  I watched a quick YouTube tutorial for Slow Instructions for the Very Beginner, taught by a 14 year old, and found, much to my delight, that it is fun!  Tomorrow I labor along, trying to achieve two squares to their fifteen.  No matter, it's given me the impetus that I needed to take it further.


I had every intention of celebrating Cinco de Mayo with bells on, but I was having a friend to dinner who has an extremely limited palate.  I did manage to squeeze in a modified huevos rancheros for breakfast.
Dinner, although well-planned on paper, skirted disaster.  I had decided to make dinner with the slow cooker function of my Instant Pot.  Easypeasy.  (Insert pregnant pause)  As we all know by now - everyone but me, apparently - nothing goes as planned.  All I had to do on Sunday was to take my recycling to the transfer station, feed the farm cat(s), drop off eggs at my neighbors and come back to put three ingredients and a simple sauce in the slow cooker.  What could go wrong?  How about everything?  It poured and delayed the loading of my car.  Dropping off the eggs involved a longer than expected visit with my elderly neighbors.  By the time I finally reached the transfer station, there was a double line of cars and trucks and I was in Transfer Station Pergatory for almost a half hour.  When I finally got back home, my neighbor had already arrived to help me prepare the lumber for the raised beds.  The dogs needed to go out, but didn't want to because - rain.  When I finally got inside to throw dinner in the Instant Pot, I had just enough time - according to the recipe - to get the thing cooked in time for the arrival of my dinner guest.  I still had to vacuum and sweep and do the usual housecleaning things, get chores done and spiffy up.  About 40 minutes before she arrived, I realized that I did not smell anything - there should have been some sort of mouth-watering aroma emanating from my Instant Pot by then.  I took the lid off and discovered that the roast was about 1/2 of the way cooked.   Not phased, for once, I pressure-cooked it for 35 minutes and it was perfect.  Bless you, Instant Pot. 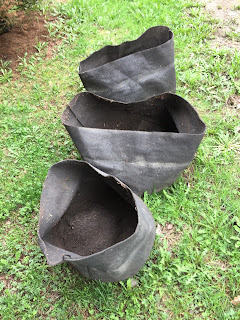 I also found a new home for my potato grow bags - I've decided to plant my potatoes in tires, when I do plant potatoes.  Between Marianne and my neighbor, I get plenty of potatoes in the late summer/early fall, so I don't have to plant them and that frees up precious space in my garden.  I am hoping that the rain gods move their focus somewhere else and soon, so that I can get cracking on the one million items on my List and that's only in the garden!

Too much rain! Curious, us it safe to plant edibles in tires? Rubber toxic?

If I could only trade you half your rainy days for half my sunny ones, we'd both be happier!

so that is where all of my rain has gone!

We call those kinds of salads "junk" salads.

Like the sock. You should have fun with the crochet. I just finished a Granny square blanket. Was fun, but knitting comes first. Salad sounds good. This is the second day of sun for us. Temps in the middle fifties. It's getting there ,but taking it's sweet time. At least your garden is starting to come along. Take care!

I am over rain!! UGH! Never heard of using tires...good luck!

Your salads (and other foods) always look SO good to me! If we lived close, you could feed me your "clean out the refridge" salad every day of the week! (Wouldn't that be nice of me to let you do that?)

I'm not a great crocheter (daughter is) but I have to admit it goes a lot faster than knitting.

We've had a whole day of sunshine and nice weather today. Wow, something to rave about. I worked (played) out in the garden all day. Now I need to go take some arnica just to make sure I can get out of bed tomorrow.

well, look at it this way...it's not snowing. and as for your 'salad' it doesn't hold a candle to another of my blog friend's 'sandwiches'.

I decided it is only May 7th; I should stop whining.

Salad delish. I often add raisins for a bit of sweetness. But then what do I know? I am a native Californian!

And your blog title. I thought you were writing about me after a 9 hour plus day of chores and using both the weed eater and string trimmer? Boy am I self important!😂

Oh loveeeee the short socks. Would look stunning with my new hiking aka work boots. Which cost almost as much as a milk goat but make my feet happy after 12 hours in them. So who cares?

Wait, what? No raisins with tomatoes? How come nobody told me...have been eating wrong my whole life. Bummer.