One early morning, while Rosie was still in residence, I had let the dogs out and stood gazing at the sky, while keeping a side-eye on PB, who prefers to do his business on the deck.  All that was forgotten when I saw four bats, zipping around the house, vacuuming up the bugs!  Oh, hurray!  Oh frabjous day, callooh, callay!  I absolutely love bats.  You could say that I am batty for bats (wait...was that a collective groan I heard??)  I have seen a lone bat, but never four.  It was so exciting!  Luckily for me, Rosie was just as excited.

Fast forward to the day she left.  I came home and found a mysterious package in my mailbox.  Trotting inside, I open it up and....it's a bat house kit!  From Rosie!!

Completely out of character, I immediately set about putting it together.  (Note: living room floor is still not finished - 5 years; guest bathroom is almost-but-not-quite finished - 12 years) 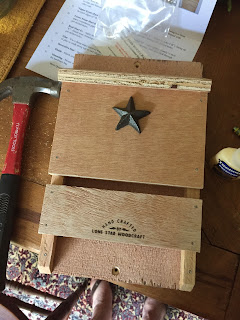 All that's needed now is a bead of caulk on the roof join and dark stain.  Let's hope I can maintain momentum.  Before I install it (after finding just the right place to put it), I will need to add a Pup Catcher.  Who knew?

One of the must-dos that actually got done, was the harvesting of my elderberries.  They are a favorite of the birds and there is a very short period between almost ripe and robbery.  I managed to get out and clip half of one bush.  Elderberry plucking is a very Zen kind of thing to do. 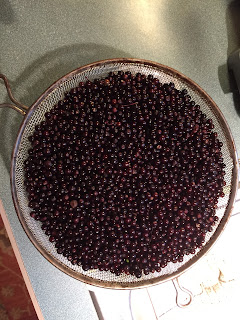 This was over one gallon of berries - and I still have the other half of the bush and another bush to go.  The second bush is not as fruited, but, still.  I filled every tray in my Excalibur. 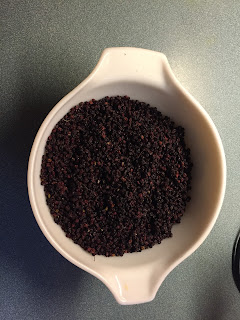 After drying, there is still well over a quart jar.  It's nice to have one bountiful crop.

Speaking of bounty, I stopped by to see Marianne after a doctor's appointment.  We had a nice chat, a cup of tea and I left with this bounty! 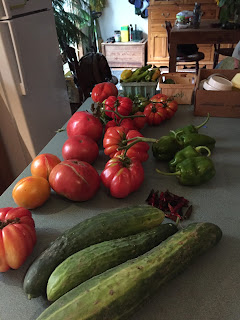 I will have to ask her (again) what type of cucumbers she grows.  They are huge, virtually seedless and sweet.

AND, speaking of sweet... 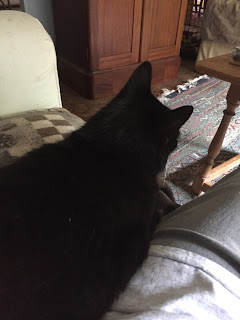 Slimmie is back and velcroed to me every morning and evening.

I am gearing up for my next, much-awaited visitor, who I pick up at the train station tomorrow.  I will be off the air, so to speak, most if not all of next week.  The planets seem to be aligned, for a change.  All the heat, humidity and endless thunderstorms have moved through and we should have clear skies, less humidity and all around better weather for most of her visit.  The week's menu is planned - not surprisingly, zucchini figures in 90% of it - tomatoes, too - and I am looking forward to hours of just being in her company.  See you on the flip side!

I've noticed a lot more bats this year - kind of goes along with many more mosquitos (I think it connects with that wet, wet spring we had). We don't have a bat house, so I'm not sure where they are roosting. Do they like coniferous trees??
Your elderberry picture brought back childhood memories or collecting the 'sprigs" with my mother and then sitting on the porch picking off the tiny berries. -Jenn

Thanks to your link, I just learned a lot more about bats, and bookmarked the bat rescuers closest to me. Have a great visit; I'll miss you!

We have lots of bats flying around at dusk. I'm always amazed that they can avoid hitting each other as quick as they fly. Interesting about the pup catcher. I wouldn't have thought that overheating was a problem.

my bats dive and skim drinks from the surface of my pool at night. i use a copper filtration system so there is no danger in them drinking the water.

Same here! I had no idea. Maybe because we're not used to extreme heat in Iowa?

better in your bat house then in our attic!!

Yay! Slimmie is home! And nice bat house too.

Fun. Pups need a safe landing spot? Who is coming to visit?

Your new bat house looks much like the one we used to have . . . same one that got taken down when we last painted the house. Wonder where it went? We see them zooming around at night, too, so they must have found housing close by.

What do you do with your dried elderberries? Inquiring minds want to know. Do you ever make elderberry jam?

Have a good visit and we'll look for your next post whenever!

I used to grow elderberries. Mine went straight to jelly jars. You have a good week of radio silence.

"There is a very short period between almost ripe and robbery." Exactly! LOL I was fortunate enough to actually get some this year; last year the birds got them all! I only got about half a gallon, but I'm thrilled with even that.

Good for you with your bat house and pup catcher. I hope it all goes well. I can't tell you how happy I was to hear you have projects that have been in the works for years! I am not alone then...so reassuring. I can't tell you how much that meant to me. It actually motivated me instead my usual feeling of being overwhelmed. Enjoy your visit!

I love bats. been thinking about getting a bat house but I have never seen any out here. lots of dragonflies scooping up mosquitoes though. glad someone is going to get some nice weather.

That's a good bowl full of berries. I bet it took a while to pick them.Love your cat. I guess he's happy just to have you all to his self. My cats are like that. They hid when company comes and come out when they go. Enjoy your visitor!!

Thanks for the link to the pup catcher! I had trouble with that this year :-/.