I was up. I was down. There was a lot of zucchini involved.

Right off the bat, I would like to say... 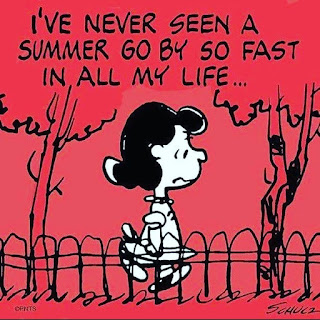 It's very true, that time flies when you're having fun.  My week with Els was here and gone in the blink of an eye - and it was a darn good thing that we were forced to say goodbye quickly at the train station.  (Who's cutting the onions??)  It was a weepy trip home.

Just when I thought that I would be able to take a breather, this happened.


Once I was assured that Els liked zucchini, I pulled out the stops on my zucchini recipe repertoire.  There were zoodles, of course, and a find-sounding-but-meh-tasting savory vegetable cheesecake (heavy on the zucchini).  There was Lemon Zucchini Bread with Lemon Glaze, again.  There was Tomato and Cheddar pie.  There were Grilled Fish Packets with... yep.  There were smoothies for breakfast and cheese and bread for lunch.  There were MANY cups of tea.  There was peace and quiet.

And, there was...weeding.  Who knew that there was someone out there who LIKED to weed?!

I delayed in relating this exciting news until I knew she was safely in the Netherlands and couldn't be kidnapped by my gardening friends.

While we were lounging on the deck, discussing the true meaning of life and enjoying the hummingbirds, I suddenly found myself still talking to Els, but looking at the sky through the top of the pergola.  My deck chair had decided to become an extreme lounge chair.  I would have carried on talking, but all my blood was being pumped to my head.  Looks like I will be searching for 'new' deck furniture in the spring.  Having guests was also the key to my guest shower head going on strike.  I have very hard water and faithfully soak the shower head in white vinegar to keep it flowing.  Apparently, it had had enough.  I managed to get my handyguy to come down at 9P to wrest the thing off so that I could get to HD in the morning to buy a replacement.  He was then good enough to come back down to put it on.  Who knew Teflon tape was a thing?  So - shower is go, chair is gone.  But summer is over and my days of lounging are over, too.
Posted by Susan at 3:43 PM

Always have a role of teflon tape out in my garage for just such events.

I'm missing all the preserving that normally goes on this time of year. A: I always did it with my mom and split the completed preserves but it will be just me from now on and B: I don't have a kitchen to do it in anyway. Maybe next year I can turn a new leaf and do it all with the help of my daughters.

i'm on strike! we were supposed to get cooler weather and it is hotter than hell. i am not pleased with mother nature right now.

Your place looks wonderful. I would be a good visitor because I like weeding and tea. You could leave me in the garden all day and I wouldn't bother you at all. Visitors arrive at 5pm tonight. I am going to offer them the gift of cultural immersion in country life aka weeding, peeling, chopping, blanching....fingers crossed they buy it.

This has been an 'interesting' summer, weather-wise. Our temps are in the low 50s every night, so the tomatoes are over. Bring on the pumpkins!

Sue, you have a standing invitation - come whenever you like and stay as long as you can! Good luck with the sales job - I find that guests always perk up after an adult beverage or two...

Susan, all that glorious garden produce! Lovely! And so is your garden. What wonderful friends you have.

I live in the Netherlands, can I have her??? :-) Garden and bounty looks great. Gets me the squirrel feeling.
Wendy

What a BEAUTIFUL garden!!

Sounds like you had such a nice visit Susan! Summer is over, sigh, I think it went by quicker this year because it really only started in early July...nice garden harvest though!

Very happy you had such enjoyment with your friend. It's hard to find that now a days. Your gardens look so clean and well kept. You have you work cut out for you with the canning and preserving and putting the freezer. Take care

well, yay you for your little summer vacation. it's still summer here. hot hot summer. I'd be glad to share. and what great bounty. I've given up on growing food for now. it's a nightmare where my raised beds are, what's left of them. I did manage to put up some tomatoes, tomato sauce, and corn earlier this summer. and you garden is gorgeous.

What a beautiful garden and an abundance of produce!

I love cosmos flowers. They always make me feel that autumn has come.