Since I've been around the block a few times (and around the sun - figuratively speaking - MANY times), and, since I am of a rather suspicious nature (too many Midsomer Murder viewings), the writing was on the wall as clear as day.  How's that for chock-full of idioms?

First - after the company I work for announced that everyone was getting a 20% pay cut, they also informed the support staff that, if they were given a bonus, the bonus would be paid out half up front and the second half at some to-be-announced date at the end of the year.  I received an email from HR informing me that my second half was being paid in August.

Second - my supervisor, who apparently thinks I can function with little or no oversight and rarely 'checks in', sent me an email to 'catch up'.

Third -  When she got me on the phone, she added HER supervisor.

Yes, it's official - my office is being closed and I am being emancipated from my job.  Even though I was not surprised, it still gave me a jolt.  I suppose it was more from the fact that, after over 22 years of working at the same place - through three 'generations' - it was over in less than five minutes.

My new list includes:  signing up for Social Security, signing up for unemployment benefits, brushing up my already-created resume (thank you, Michelle), wending my way through the dizzying varieties of supplemental health insurance, tightening my belt, and pulling up my BGPs.

Meanwhile, back at the homestead, we've been assailed almost daily by a juvenile red tail hawk.  He or she is completely inept at chicken attacks, thank god.  But I am compelled to rush out on a regular basis to shoo him/her off.  It has also underlined my belief that roosters are not necessary, as everyone lets me know of impending danger.  I lost my last rooster and have no plans to replace him.  Then I lost Dolly - my sweet Swedish Blue/Cayuga duck cross.  It was a total mystery.  That leaves Dimples from the original four ducks.  Luckily, Marianne's male duck is all alone on his pond, so Dimples will be joining him as soon as they reinforce the fence.  While she may not be thrilled with her new boyfriend, she will definitely love the pond.

The garden is pretty much finished for the year.  There is the ever-present and abundant kale and the Swiss chard is still limping along.  I have managed to weed out four of the eight beds and hope to finish by the end of this week.  Then starts the process of putting things right before winter.  As I will now have loads of time... I hope I will get more done.

I had hoped to get local peaches and plums, but a late frost wiped out any hope of most stone fruit here.  Then - magically - this arrived in the post: 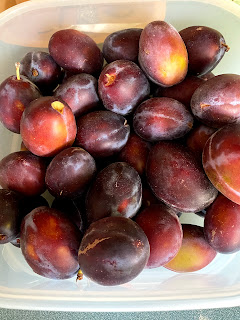 Prune plums from Oregon!  As always, my lovely friend (in every way) had perfect timing.  I whipped up my favorite plum crisp (GF) and made a batch of plum jam.

I have also been taking advantage of the vege bounty (thanks to friends) and have been roasting a big pan of vegetables every week.  It is my favorite way to cook ahead, as you can eat them hot out of the oven, at room temperature, as a cold salad - you can toss them with a light vinaigrette and some feta cheese.  You can roast them with feta cheese.  You can toss them hot with sundried tomato pesto and mix with pasta.  There is no end to the variety of meals one can conjure up.

My sister spent the night this past Friday and she helped me wash the dogs the next morning.  Since Peanut counts her as his favorite human in the world, she can do anything to him and he goes along willingly.  While Lovey never smells bad, Peanut is a hot, sweaty little being and gets a little 'ripe' after  a while.  They now smell like lavender and cedar. 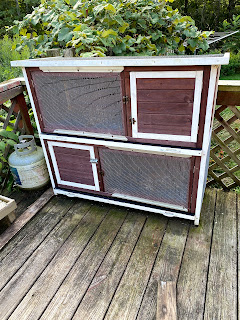 Best of all, the last reminder of the Great Quail Fiasco has left the homestead.  It will now house rabbits on a homestead to the south of me.  As another plus, two bags of fleece found a home with a spinner who is interested in adding more Cormo/CormoX sheep to her flock.  As it happens, I have a CormoX that I would LOVE to rehome (are you listening, Norman?)  Fingers crossed.

So, off I go to contemplate my navel, attend another useless Zoom meeting, and try to figure out what I want to do with the rest of my life.

P.S. Nancy, here is the tomato pie recipe I use - Epicurious

i guess you knew it was coming but it's still shocking when it happens. maybe you can come back to the blog world a bit more often! i, for one, miss you not blogging. it's a good time for doing nothing because it's what everyone else is doing!

No matter how much I could see it coming, I never liked losing a job. But once I found that next job, I always looked forward to the fresh start.

Well, first off, congratulations on your retirement! Although I know you well enough to know you will never, ever fit into the common description of "retirement." I think it comes at a good time of year, too. As the busiest of busy seasons naturally winds down, it will give you time to contemplate your navel (your words, not mine) and also make some wonderful plans for the future that are just exactly what YOU want to do rather than trying to fit those personal dreams around your office work day. I'm eagerly anticipating seeing what life brings your way as you enter this new phase. I have a feeling deep in my bones that it's gonna be fantastic for you!

getting rid of the farm animals? I guess I missed what happened to the quail. no quail, no ducks, no sheep? and now that you have plenty of time. I like retirement. don't miss those long days in the shop at all. I still keep plenty busy though and now my creative endeavors are for my own pleasure even if they are awol lately. the creative endeavors.

Well, doesn't that just fit in with the rest of 2020?!? Ugh. I sent you an email; let me know if I can help with the resumé in any way. Just an FYI; one big branch of my Brooks prune tree broke right off last weekend. I have bowls and pans of ripe prunes to process NOW.

Welcome to the huge world of retired folks. Some of us are old, but you're not. So just ease on in and enjoy.

I’m so sorry about your “emancipation “ even though it could produce some good (and I hope it does.). Still, a shock, as I know. I wish for you the best possible new beginnings.

I don't know if I should offer condolences or congratulations! I hope you will be fine until you decide which direction to go in - employment or retirement. I'm sure the rabbits will be happy in their quail house. I'm never replacing my roosters either. Jerks. -Jenn

Well, gosh, I missed what happened, with your quail. I am sorry about your job and hope things get better from here on out. I'm not replacing my rooster(s) either. Thanks for the tip on adding feta to roasted veggies. I never thought of that.

I am so sorry about your job loss.....but at least you're not alone if that helps? Probably not. I am big on financial security until I learned there really is no such thing. Most of us could be "taken out" at any time...a couple disasters are all it takes. I take you are too young to retire? Maybe you could do a YouTube channel on self-sufficiency? Those people make good money! I watch homesteading channels and people are always sending them things plus cash.
One thing I have learned and it has been my mantra is "rejection is protection and/or direction". Once I embraced that things seemed to go a lot better and I was excited to see what the future held in store for me and it was good! Enjoy your "time off". FYI, if everything goes to hell in a hatbox you can always come down here and live with me! Scary huh? LOL! Hugs ~ Sam

Well, I'm sorry to hear your job came to an end. I've been in that situation and it's no fun, but at the same time, it IS an opportunity. Not always easy to see it that way, but hopefully it will become clearer over time.

The plums look great, and good luck with the hawk! Maybe you can adopt a rooster for purely humanitarian reasons. No one ever wants the roosters, poor things.

The "great quail fiasco"? I think I must have missed that post!

I guess I'm not surprised either; your company has been showing it's colors gradually. I know too well what a wrench it is to lose something that's been a big part of your life for decades though. Hugs.

It's funny how roosters can be different. With 40 hens, my two roosters are needed to keep the peace as well as father the next generation (which are the cutest).

I'm sorry about the job. I lost mine back in April. Even though I volunteered, in hopes of saving someone else's job, it was a bit of a jolt to hear that we would not come back.

I have never heard of a tomato pie in my life, but am keen to try it.

So sorry for the way your ending happened, pretty impersonal. I guess its better than a letter! You're resilient so I hope you'll be fine. My hubby got laid off a few years ago, and after some time wound up in a much better job, it's a love fest! Maybe at least you won't have to commute in the bad weather? Glad dog smells better!!