Just when it couldn't have been more surreal...

Tuesday night was a nightmare - driving-wise.  The snow started at about 4 P in the city and was blinding by the time I hit the road home.  It was a fine, icy snow, too, just to add more spice to the experience.  Having grown up on the southern shores of Lake Erie, I am plenty accustomed to driving in snow.  I learned to drive with a manual transmission and have never looked back.  This, along with a very strong sense of survival, has served me well as I continue to live Norther.


I wish I could say the same for the nimrods on the road with me that night.  As I headed up my mountain road, I came upon three cars in various stages of off-the-road.  I very, very carefully turned around and headed home by the long route.  During the slow, hair-raising trip home, three cars went off the road in front of me (all were fine and had cell phones) and the super-duper-nimrod tailgating me went off the road himself.  Thankfully, without taking me with him.  I did not bother to check on his ability to call for help, feeling that one call from the group would suffice.


I skipped kissing the snowy ground when I got home (although I did hug my mail - my special yarn arrived!) and got the dogs out ASAP.  It had taken me almost two hours to make the one hour trip.  I then geared up to do evening chores and, when on the deck headed toward the gate to the sheep area, I saw an odd sight.  The chicken coop was lit from within - it had been so dark in the morning, I turned their light on - and silhouetted on the OUTSIDE of the coop, under five inches of snow, were the chickens.  Holey Shineola.


I trudged my way to the coop, wielding my snow shovel, and found most of the hens with Mr. Cowardpants huddled in a cold, damp clump.  I very carefully opened the door and looked in.  To go eye-to-beady-eye with a hawk, sitting on the roost, nice as you please.  HOLEY SHINEOLA.  I did a quick glance around and saw one dead hen, with a few more cowering in nesting boxes and wadded into the corners.  This was not going to be easy.  Fast-forward through much flinging, flinching, wielding, screeching, and other hysteria (and that was just me), the hawk ended up flying violently into the wall and knocking itself out.  I swear it was like a scene from an Alfred Hitchcock movie.  I carefully removed the hawk and the poor remains of one of my dear Faverolles outside and then started to gently herd the flock into the coop.  I did a quick head count and realized three were missing.  After getting everyone settled down, I went out in the dark with my headlamp and managed to find two, hunkered under the little coop.  I did not find the third.  Everyone was securely closed in and I moved the hawk into a sheltered place and left it to its own devices.


I finished chores, fed the dogs and had a glass of my neighbor's 200 proof eggnog for dinner. 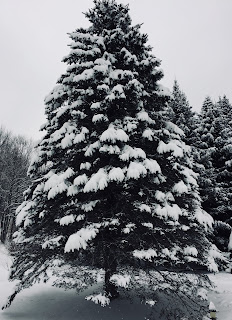 In the morning, under a foot of beautiful new snow (they forecast 4-6 inches - max.)  I discovered a bedraggled, damp, cold hen aimlessly pushing through snow drifts.  Poor dear.  I got my hands on her and slipped her into the warm coop.  I am sad to say the hawk did not survive - they are beautiful birds, but I could not leave it in the coop, obviously, and it would not fly out into the dark.

Oh, dear. Never a dull moment. I'm sorry the hawk didn't survive too. They are such beautiful creatures but you had to protect your critters.

What a story! Too bad about the hawk, but obviously you did your best!

I am always amazed at the number of crazy drivers who act like they have never driven in snow before. I always tell my kids when the roads are treacherous and we decline to go someplace they were wanting to go, that it isn't me I'm worried about but everyone else driving unsafely.

I've seen a lot of critters in the coop from snakes to raccoons to possums but I've never seen a hawk. That would be a first for me.

I love hawks, but I'm not sorry that one died. Knowing how to get into your coop and find dinner would make it very bad news.

That said, there is something awe-inspiring about birds of prey. Owls, hawks and eagles, all fascinating.

Wow, that was harrowing! We had a big owl roosting in our coop one year...nothing like freaked out chickens. My DH said it was like fighting a dragon...

sorry. but i'm still killing myself laughing over the use of the word "nimrod"...we use that word up here, too, and i think it means the same to you guys as to us! bahahahaha! but what a horrible ride home and then to find that beady-eyed guy in the chicken coop - talk about a long day! i sure hope you drank all of the eggnogg and had yourself a nice bath! glad that almost all of your hens were ok and/or found.

never a dull moment with you Susan! sending love. back from being MIA, your friend,
kymber

oh dear, a hawk got my Dutch bantam last month, and the other Dutch is now very sad, once Lucy/Ethel (they looked identical) is now just Lucy. Glad you didn't lose any more.....

Hawks must not be like pine martens because if a pine marten had gotten into the coop, there would not be a live chicken anywhere to be seen. That happened to us once with a coop full of pullets just ready to start laying. I know the hawk was just looking for meat to fill his/her belly, but it's still hard to like them when you lose even one chicken in your flock.

Good grief, what an adventure. Let me add yet another reason not to have fowl. I do love seeing the Red Tails grabbing those evil California Ground Squirrels. I'm always amazed at the sheer stupidity of some drivers in snow conditions. Really, just a little common sense goes such a long way. Glad you made it home safe and sound. Mr. Butters and Lovey were getting hungry. ;-)

bad luck hawk! glad it didn't kill any more of your hens. never a dull moment! a big warm up is on the way!

What an experience! Not a very happy experience for either your chickens or the hawk - most unfortunate.

If you think drivers in snow country are bad, you should see what they do in the south! Insane! They are the main reason I don't go out when it snows around here. But this last batch pretty much melted today, thankfully.

TG for the eggnog!

Oh man. We had a hawk hanging around here too. My grand-pup ran it off before I even saw it. Sounds like a long enough day for a good cup of that eggnog.

Did your cold hen who spent the night out recover? Tough with no shelter. Sad to lose some birds :( Glad you're a good driver!!! :)

We are less our rooster and one hen now thanks to hawks. Can't do much about it I guess. At least they haven't figured out how to get into the coop!

Oh my gosh Susan, that is awful. I do love birds, but predator birds irk me...your poor hens. Glad you had some eggnog though.

I avoid roads like the plague when it's wintery out...I know I can drive well, but I trust no one else!!

Good grief you did have a day. Hawks are our nemesis here and the roosters are getting the young hens trained but we have had losses. However your hawk inside the henhouse......The eggnog was just the medication you needed! Our prayers to your continuing adventure. Bless you and yours!