Glorious in its Imperfections and Farm Cat Shenanigans.

After a very small (okay, one day) hiatus from knitting so that my hands could rest - alas, my mind could not, ergo one day - I was hot on my pair-of-socks-a-month deadline.  Not surprising to those who know me, these were not too big, as were the last ones.  They were too small!  I was a tad disappointed, as the yarn was special - a hand-dyed green single Merino - but I bucked up and went on the lookout for someone with more diminutive feet.  With any luck, these socks will be winging their way northeastwards to someone who sports Audrey Hepburn-like footsies.  And who will appreciate them in all their glorious imperfection! 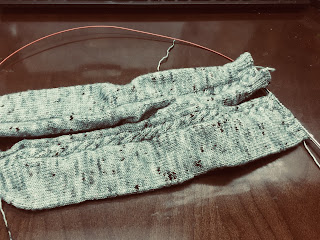 For those of you who are interested (if you're not, just hum a few bars of something - I'll be back in a second), these were knit with a magic loop, from the toe up.  First for me and I like it!


I'm back.  I've been chipping away at the snow load and Mother Nature has been giving me a hand by a) not dropping anymore snow on us and b) providing daytime temps that encourage meltage.  Unfortunately, our night time temps encourage freezage.


Which is why this is my view every night and every morning:
On Saturday, I visited my parents and got to see my sister and dog nephew.  I then swung by my friend's house to drop something off and commiserate over her frustration at having a broken ankle and a large farm to take care of.  Indeed.  Luckily, her husband has been stepping up, as have various nieces and a nephew, and the weather has been crapola.  I was excited to see their new addition, which she, so far, has only seen with binoculars.
Then it was back home for more shoveling and housecleaning, and whipping up a quick, early dinner for my 83 y/o neighbor who has been my savior during March and beyond.

*****
I have been feeding the cats at the dairy farm's abandoned farmhouse for almost two years.  During that time, a female cat (which I named Grayce because she's gray and I'm so creative) has been a constant.  She is, thankfully - I think, fingers crossed - spayed.  I seem to remember her from some years ago as a catch, spay and release project from a well-meaning but dingle berry local woman.  This is the same woman who 'set free' a neutered male, long-haired city cat that got so matted and burr-infested that he had to be trapped, shaved and rehomed INSIDE, poor boy.  Anyhoo, Grayce has gone through her share of boyfriends and seems to have settled on a rather taciturn male with tiger stripes.  They get along, she whacks him on a regular basis and he puts up with it, and all has been going swimmingly.  Until his insane doppelganger arrived.  This boy has hormones up the wazoo and gets into fights on a regular basis.  He's a mess and has upset the apple cart of harmony.  We're stuck with him because...
And this pic was taken after a week of meltage.  Of course, the three feet of snow on the metal porch roof has come down as an avalanche on a regular basis and, try as I might, I can't keep up with it.  If it's frozen, I can scale the mountain of snow and reach the porch proper, where they are fed.  Unfortunately, I cannot do this safely whilst donned in work clothes - and I feed them on the way to work.  I will have to dig the steps out again this weekend and, hopefully, oust the bugger.  I will try to tempt him to the front porch, but, you know, hormones.

I've found my dogs to be so generous, just like yours. They allow us partial use of the furniture in exchange for keeping blankets clean and available. I'm wishing I had diminutive feet right about now. SUCH pretty socks and a favorite color of mine for sure. I find that abandoned farm house so sad. It's once beautiful gingerbread trim haggard beyond repair.

Oh, yes. I am allowed one-third of a chair and a half. And barely that. I feel the same way about the house. I used to sit on that porch and visit with the dairy farmer's father. Many pleasant hours.

Isn't most of the trouble in the entire world due to male hormones?

If I must knit socks, it's toe-up Magic Loop, baby – but since I wear them out faster than I can knit them (except for lifetime warranted "Darn Tough" socks; hurray!), I only knit them (very rarely) for one friend who loves them.

I think you may have something there...

There is such a thing as lifetime warranted socks?!? How have I missed this? My strategy is to knit a huge number of pairs of socks so that I don't wear any one pair too often. It's faulty logic, but...

Aw, I love scotties. That's what my grandpa called them on the ranch.

I'm being pitiful: I need to sew the pieces together to finish a pillow so I can start a new knitting project, but I hate this part. Thus, I procrastinate.

Lumps of love on the sofa in the morning, priceless. Could be nasty outwitting the interloper, hold a chair in front of you or something similarly high tech. The house is lovely, is it beyond repair?

Same here... day-melt...night-freeze. But we didn't get as much snow as you did, so ours in mostly gone.

Gustav Klimt, a favorite artist of yours! And you never told me! ,-) I just found him!

Don't hurt yourself, with that stray cat care!!!!! You know the old saying; "No good deed, goes unpunished." -sigh-

Don't think I'll ever be able to master the sock knitting technique such as you're using.

I've never seen dogs so totally snuggled under/bundled up in blankets as yours. Cats, yes, but not dogs!

You are such an angel to regularly feed those feral cats at the old farmhouse.

Hi Susan :) Your posts are so fun to read. Meltage and freezage...I know the pain. Right now we're in meltage and it has NOWHERE TO GO...puddles and puddles of quick sand all over the driveway...my car is at the outermost limits near the road at the moment, with hopes that it will not sink and disappear.

You must have a ton of energy to zip from one project to another like that, on top of homesteading and working a regular job. I live literally a few feet from where I work, and even so I pretty much lock myself in my house each weekend.

Whose lifetime? Yours, mine, the socks? Once my daughter said to me "one would think someone would invent pantyhose that don't run." My reply " uh no, think job security."

If Darn Tough socks wear out, they are replaced for free – seriously!