The one good thing about being wide awake at 3AM, is that you can take advantage of an alert mind (more or less, leaning heavily on the less) to plan out your day to its utmost usefulness.  Then, once you are awake and up and functioning, you can watch it all crumble into dust.


Since I am now in my seasonal up-real-early-for-no-apparent-reason state, I do some of my best thinking before I venture out of bed.  Lovey is very relieved to know that she does NOT have to get up, too, and burrows blissfully under her fleece blanket for another two hours.  I, meantime, have a giant cup of coffee, check my email - just in case something really important has happened in the wee, dark hours - and knit.  I like my morning routine, especially on the weekends.


Saturday morning, after plotting out my day from sun-up to sun-set, I made my coffee and tottered to my chair, where I wedged in besides Slimbo and opened my email.  It was then that my plans disappeared into the ether.  I had been sending out feelers to volunteer as a foster home for any dogs that met our criteria (older, male - preferably, although we may be open on that item - non-aggressive, good with cats and all things living).  With such a huge influx of dogs and cats coming into our area from Houston and Florida, we wanted to help.  Due to the limits of both space and layout, my house cannot safely quarantine a dog, so mostly, we were not suitable.  Then, this.  Meet Peanut Butter.


PB, also know as Nutter Butter, Bullet, and Whiz, was in foster because of a neglect case north of me.  His owner had been keeping him and his dog brother - a border collie - confined in crates ALL THE TIME, and they were seized, both covered in urine and feces, PB with skin infections, most of his hair gone.  He is through all of his medications and most of his hair is back, although his ears are a little bald.  He is three and suffers from insecurity - and is one of the cuddliest dogs I've ever known.  The rescue needed a new foster because the family who had him wanted to take on more dogs - large house, good set-up for quarantine and very loving people.  The rescue wanted to know if I was interested.  Well, yes, I was.  Lovey and I dumped all other plans and headed towards the city to meet him.  It went well, so the three of us and PB's giant bag of possessions were headed home.  The first three hours were filled with a mostly-haired, reddish brown ricochet ball, zooming around the house, careening off the furniture.  I got them outside in the fenced area and Lovey discovered - to her pleasure - that he was playful!  They never looked back.  Slimbo is withholding approval until PB stops barking at him.  Later that afternoon, I was able to get things done because...

While they were sleeping, I snuck off to Marianne's to deliver her weekly eggs and get my swag in return.

I then came home and made a new vege casserole, which I will definitely make again - sorry, no photos.  Foster brothers ARE exhausting!


Sunday was cleaning and I decided to tackle two crafty-type things that I have been skirting for months - decorating a little footstool and framing these: 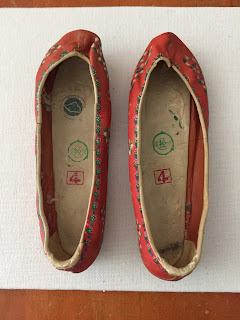 Way back, long, long (looooooong) ago, when I was little, my Uncle Jimmy was in the Army, in South Korea.  When he came back, he brought three little Korean outfits for his three little nieces.  Believe it or not, I still have mine.  I had always wanted to mount and display the outfit - shoes and all - in a box frame.  This never happened, as I would have to have it custom-made and it would cost a fortune.  But I did find a small box frame and intended to at least frame the shoes.  They sort of look like something you'd find in an ancient tomb don't they?  Unfortunately, the frame is not deep enough and I don't want to apply pressure to the shoes, as they will disintegrate.  I am on to Plan B, whatever that may be.  Also, frustratingly, my intention of completing my little step-stool project was also flummoxed when I could not find my paint pen!  Curses.  Not to worry, I have at least seven other projects in the works...


Thank you, all those who entered.  Winners please email your mailing info to swomersley at gmail dot com.

Glad the dogs are getting along, ha ha! I can't imagine taking on to volunteer like that. My dogs would go ba-zerk. At least you have a fenced area. I declare, I don't know if we'll ever get ours built.

omg..he is so cute! look at those paws! you can never give him away.

What a sweet post today.
Love love love little PB, so nice for you to help.

You and PB are meant for each other.

I know! Dachshunds have big 'flipper' front paws - all the better to dig big holes FAST! I'm hoping that he and Slim will work out détente so that it will be easier to keep him. At least Slimbo is bigger than PB.

Thank you - it's hard not to, given the need. I'm so glad there are such wonderful people who are flying and driving them out of harm!

I think you're right.

Thank you, Agent X, not.

It looks to me like PB has every intention in staying put in his new home. He's a cutie, I hope you can keep him.

Fostering? Shall we take bets on that?

PB has finally found a Forever Home..... congratulations, mum!
Perhaps you can go to your Big Box lumber store, take the shoes and dress with you, ask someone who knows about what size and type of wood to use, backing and Plexiglas for front. This is definitely something easy to do!! Waiting for finished project!!

PB what a cutie! Good for you for adopting, er, fostering. I was a foster for 16 plus years for a Great Pyrenees rescue and loved it! Gives one a chance to change a life. One of my favorite quotes "To the world you are a rescue person to a rescued dog you are the world"

I have, technically, two weeks. The trouble with fostering is, you have to tote them to adoption clinics and then - gasp - someone else might want them! I am a failure...

LOL! I am a many times over foster flunkie. May I be the first to welcome Mr. P. Butters home?

That is a great idea, Elaine. I might swing by HD when I am up in VT next weekend.

That is a wonderful quote. I love GPs and did inquire about one that was up for adoption. She had a strong interest, so I went in the other direction. Tiny but fearless.

Looks like a wonderful addition to your family; congrats!

woohoo - i finally won something!!! those new foster babies are adorable and so are you for taking them! and now everyone has 2 other brothers!

i have my korean teacher's wedding dress - she gave it to me when i was taking korean in military school. those shoes look so familiar to me.

you sound like a busy little bee but what else is new? i hope you have a great rest of the week!

oh ya - i think you already have my private email, but if not, send me an email to kymberzmail@gmail.com which will re-direct to my personal email and then i will give you my address and we can figure out the shipping costs. xox

Yes, Mr. PB Cutie Pie, you are in heaven.

If I lived closer, I could build you a box frame. I wouldn't dare be the one to try and get everything mounted inside it but I know I could at least build the frame.

He's a cutie, I hope you can keep him.

PB is so cute! Who could resist that?

I had seen PB on the Peppertree website and wondered if you would bite. Congratulations. My Kim that I adopted from them is wonderful.
Peter

It's certainly not a title to be ashamed of!

He is like a little ray of sunshine. Something we have been missing lately.

Yay, Kymber! I will be contacting you today. Would love to see a photograph of that wedding dress - I bet it is beautiful!

I am feeling I had better hurry up and knit him a sweater - the mornings are cold and he is still a little light in the fur area.

Rats! Wish you did, too!

I figured I would have to snatch him up quickly - I could see a line forming.

Hi, Peter. PB is my fourth Peppertree dog. I think they do a great job - having a dog that has been fostered makes a world of difference. Sounds like you know me.... :)

Oh Susan...foster failure looks definite! We fostered Charlie, then Jack, then Oscar the cat, then Marlene...now we have 6 pets with our first 2 cats. We had to stop going to the shelter! Peanut Butter is ADORABLE. Congratulations! I know you'll keep him! :))

Ah what a sweet little face! Good for you taking him in. I just don't understand people who abuse helpless animals :( And that it one HUGE tomato, WOW!!! Nancy

Wonderful post....found you via Rain's blog. I LOVE LOVE that you help take care of dogs. Awww Kudos to you and more! Lovely blog here and I look forward to getting to know you more. :)

Shelters are so emotionally charged for me - I don't go, because I want to haul every single animal out and take them home. I have 'failed' with every foster but one. Isn't that tomato something amazing?

I don't either, Nancy. I cannot fathom leaving this peanut in a crate for hours/days on end. Cannot. I would grow this tomato myself, but I'd have to build my tomato cages out of steel rebar!

Hello and welcome, Alexandra - I took a quick trip over to your blog - what beautiful work! Thank you for coming by!

Tiny poop! That pup has no doubt that he weighs in at 100 pounds 😊