Yesterday was truly the darkest of them all.  I have no words, only tears.


Lots happening but not a lot of opportunity to post.  So - you get it all at once, you lucky devils.

First, there was this:

which is not surprising, since I do live in the Northeast and it is winter.  However, there was also...no heat.  I quickly got on the phone and called - pardon the expression - my furnace guy's hot line.  Also as no surprise, there were quite a few of us queued up on the hot line.  And, as there were elderly people living in trailers with no back-up heat source, I was relegated down the line.  A fire was lit in the fireplace and the electric space heaters were put in bathrooms.  We snuggled.


Then there was the good news/bad news - it was not my furnace (good) but it was my thermostat (bad).  Off they went in search of a replacement.  Some hours later, they were back and installed the new thermostat.


Next morning?  Rinse, repeat.  Bad thermostat.  Made in China (really surprised you there, didn't I?)  Second thermostat seems to be holding its own.
We had a cold front move through - more than one, I believe - behind a gale-force wind.  It was rather...er...noisy.  Then we got eight inches of snow.  Then it rained.  Then it froze.  Herein lies the whiplash effect.  Sunday morning I woke up to rain and 39 degrees.  This morning?  It was 9 degrees.  At least it was in the positive.  Gads.  In between, I was busy shoveling, raking snow off the carport and fuel tank cover, loading sand buckets, chipping piles of icy llama beans, adding layers to duck huts, chicken coops and barn floors.


In amongst these activities, I ladled out the birdseed.  Only later in the day - after noticing a drop-off in bird activity, did I discover there had been a violent death.  Gah!  I believe it was one of my mourning doves.
Between the 8+ inches of snow and then the rain, I was kept on my toes by the slow movement of snow and ice down my shiny new metal roof.  After the close call with The Pepperoni, I am very alert.  The entire back of the roof shed its load right when I was baking my latest GF discovery.  I am blaming the collapse of the loaf on the extremely loud noise the snow load made as it hit my deck.  Not only that, the center was not cooked through, even after an hour and fifteen minutes.  I was loathe to cook it longer, as it would have dried to the consistency of a hockey puck.  Can chickens eat chocolate?


Living in the Northeast in winter is not for sissies.
Posted by Susan at 10:17 AM 13 comments: 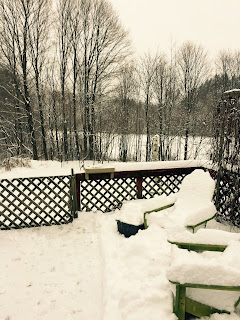 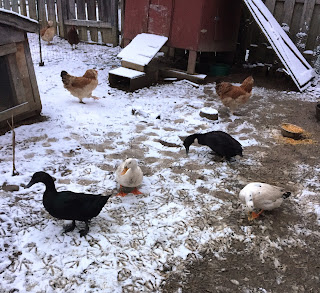