I've given up trying to figure out the weather.  Once again, it will be a Winter of All Jackets.  Rain, vest, down, windbreaker.  In an effort to lift my mood, I have pulled out all the stops on the hygge. 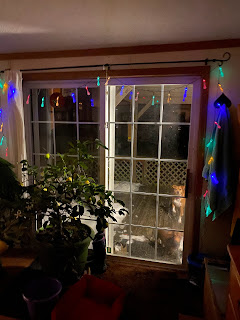 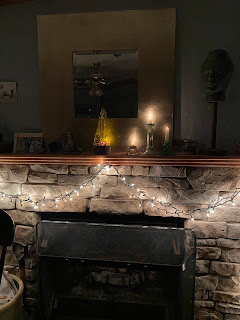 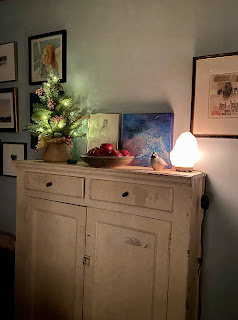 Although I am no longer canning and preserving like a 1930 prairie housewife, I did manage to put up some applesauce from a wonderful mix of heirloom varieties that Marianne gave me. 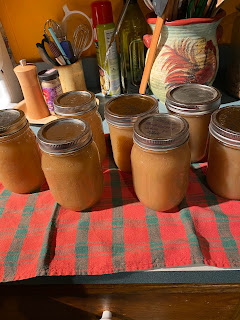 I have also been cooking up comfort foods, like mushroom rice.  There is a local business that grows the most amazing mushrooms - the concoction below has shiitake, lions mane and chestnut. 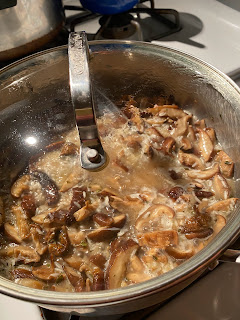 I've been doing a little knitting, but have been concentrating mostly on a big clear out.  I am girding my loins for a foray into the laundry/tool/garden/storage room.  My plan is to get rid of at least one third of what's in there, so that I can stop cringing every time I open the door.

Apria was finally buried a week ago, Sunday.  It was, unfortunately, as ungracious as I had hoped it wouldn't be.  (Sorry for the convoluted syntax.)  It broke my heart and I wept copious tears.  I think I totally unnerved the excavation guy.  When I asked him if I could write him a check, he said he would send me a bill and got out of there as fast as someone driving a large earth-moving piece of equipment could manage.  I haven't gotten the bill yet, which is like having the sword of Damocles hanging over your head. 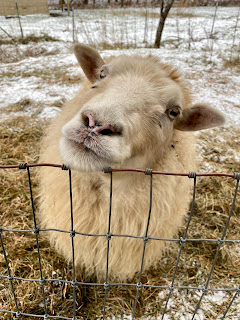 ...a sweet, older gentleman sheep is looking for a cozy retirement home.  He seems to be adjusting to the loss of Apria, but he is lonely.  Winter is never a good time to rehome a sheep or any other livestock.  He comes with his own hay and can be transported, so fingers crossed.

So complicated on every level


On Sunday, Apria cushed (llama speak for settled in a bundle on the ground), gazing into the distance.  By Monday she had passed away, before I could get a vet to the farm.  She was in her early 20s and I had hoped for another five or so years with her.  It was not to be.  I think that her blindness, oncoming deafness and challenged dentifrice just wore her out.

As if that wasn't bad enough, the process of removing her and giving her a decent burial has been somewhere between planning military maneuvers and juggling with swords.  It is a nightmare which, I hope, is over today.  I'm not holding my breath.  So far, I've had to cut trees down, remove a section of fence and I'm on the phone with farmers, excavators and loggers - leaving messages and waiting (and waiting) for return calls.  My neighbor and I managed to get four of the five trees that needed to be removed (all are pines and all are dying) cut down but the fifth needed a professional.  Enter Dreamboat Arborist, Llew.  He cut the tree down last evening as the sun was setting, climbing up the tree in near-darkness.  I have yet to see the excavator, but I hope he'll be here today to see what equipment will be needed.  A farmer friend has offered a spot behind his barn for her final resting place.  Now, if all the many pieces of this gawd-awful puzzle would just fall into place, Linden and I can get some peace of mind.

Then, there is Linden.  I need to find him a home where he can live out the rest of his retirement years.  My only other option is to add a companion animal to the farm, but, frankly, my heart just isn't in it.  Neither is my pocketbook.  Fingers crossed that this lovely girl can finally be released to her next adventure, or go to the place where llamas gather.  Linden and I could use some rest, too.