Driving Ms. Z and a lot of etcetera,

After we strapped in and drove down the driveway, it was an adventure all the way.  Ms. Z, Max the Dog and I stopped at the local post office and... 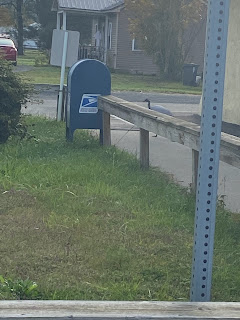 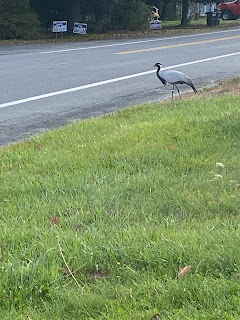 Yes!  There was a heron, staring in at the PO door.  I tried for a better shot, but he/she was right in town and causing all kinds of looky-sees.  It was just magical!

We then headed SSE, then SSW, then SSE again.  The first day brought us through NY, PA and perilously close to Baltimore.  We found a Motel 6 in the hood that was pet-friendly and brought in the bare necessities for the night.  We also managed to find a good Japanese restaurant nearby.  Max, bless his heart, is not a barker.  I was lying in bed, thinking about how different it would be if Mr. P was there.  Someone would shoot my windows out, I'm sure.  The M6 was clean and reasonably quiet.  I didn't take pictures, since there was a good chance I'd be mistaken for an undercover cop.  Snort.

After Maryland, we ticked off a corner of WV, sliver of VA, whole big whack of NC and SC and then, finally, arrived in Savannah at 10PM.  It's been MANY years (decades?) since I drove that many miles.  As a matter of fact, it was brought home to me how long it's been since I've traveled at all (other than a delightful trip to Minnie Soda six, seven years ago?) when I opened my smaller duffel bag and discovered tampons, compass, cork screw, and screw driver inside.  At least I had been ready for everything, those eons ago.  Ms. Z is great company, and she entertained me with tales of NYC before art was a business, patriotic songs she had learned when she was a girl, verbatim ad jingles and more.  It was a blast!

Saturday we collapsed, unpacked, had a delightful visit with Z's southern friends, and got to glimpse tantalizing tangles of Southern Moss and live oaks.  Her house is delightful the the flora is exotic and lush.   We collapsed again and then I was off at the crap of dawn to the airport.  I won't name the airline, but it should really be called Sardinia Air.  I was picked up in Albany and then it was home, sweet home.  My house/animal sitter was great, so I am hoping that I will be able to go on more forays (SoPo) in the near future.  I will also revisit Savannah and Ms. Z in the daylight.  It looks like a beautiful place.

Mom was back in the hospital just before I left and still there when I got back.  She was moved to a rehab center near her doctor (whom she's never met - this makes doctor no. 3/4) and my sister and I went to see her on Tuesday.  I know that there need to be strict protocols due to Covid, but geezelouise.  There is no phone in her room - which is not a huge problem, as she does not have her hearing aids - we can only see her once a WEEK and we have to make an appointment to do that.  Our 'meetings' are limited to 15 minutes and are attended by a rehab center staff.  Trying to get information or talk to a person has proven to be very frustrating.  We are lucky enough to have a connection to someone who works there, which allowed me to talk to mom last night via the friend's cell phone.  We have an 'appointment' to see her again on Monday afternoon and we hope to break her out of there.

Back on the home front, I have been working on cleaning up the garden.  I ended up selling all the stuffies I had knit that were in the salon gift shop and they are clamoring for more.  Oy.  I am trying to get four done by the end of next week and that will have to do.  I have holiday knitting looming.  While I was inside, furiously knitting stuffie parts, my dear neighbor came by to help prepare for winter.  He, apparently, comes from the school of Torched Earth Landscaping.  My lingonberry bushes have disappeared. 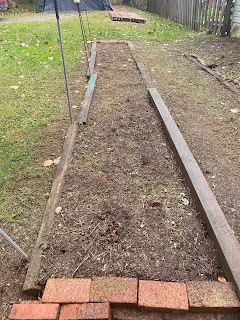 I am not sure if Peanut is still recovering or if he's hit his stride in high drama mode.  I am still hoisting him up the steps and into the house.  Slimmie got a new self-heating bed and we haven't seen much of him lately.  My chickens have ceased laying eggs so are now officially classified as freeloaders.  Some good news - my barn has been filled with hay!  Once again, my wonderful farmer neighbor has packed the barn for winter with lovely second cut hay.  At $2.50/bale.  Shhhhh.  Don't spread it around....  This is much appreciated by my ancient llama, who is down to two teeth.  And by me. 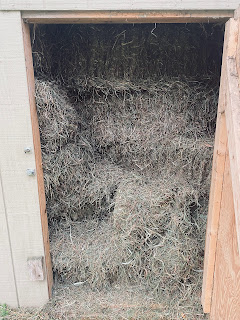 I started two fermentations this year - carrots and ginger, and curry kraut.  The carrots need more time, but I have to say that the curry kraut is now my favorite! 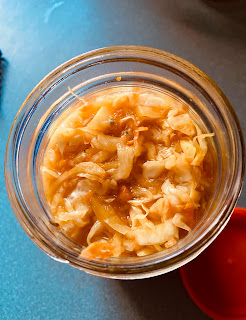 Lastly - for now - I have started up my bread run again.  I flounced into Perrecas and just inhaled.  Then I hyperventilated my way to M's store, making sure the windows were up so that I wouldn't miss an iota of warm bread aroma.  Heaven (and hell, to be honest).  On my maiden drive, I was reminded that I needed all my senses on high alert.  There were deer, school buses, heavy fog, and lunatics behind the wheel.  Ah, Autumn.

It has been all "hurry up and wait!" around here.

There have been times, recently, when I wonder how I managed to fit a full-time job into my life.  I guess the Universe doesn't like a gap, so fills every-single-one in, whether you like it or not.  A friend has had a rough patch and I have been shuttling her to various appointments.  And, since all of these appointments involved doctors, none of them were short. 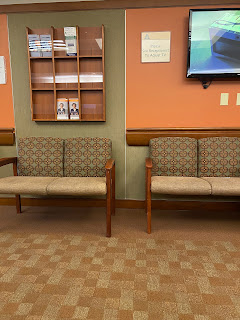 Not shown is the parking lot of the vet's office, where I have had to pick up more pain meds for the boy.  And there is the fact that my mother has been in the hospital for the past two days - my sister, thankfully, does the waiting there.  AND since I have hired on to drive an elderly friend to Savannah, Slimmie's vertigo seems to be coming back and the mice have started emigrating back to their winter resort (Chez Moi).  I am a little angst-ridden because of the fact that I am hoping to break in a new house/farm sitter.  This is turning out to be a real rodeo around here.  If she makes it through all of the hefting of the sausage dog, pill giving, barf cleaning and the challenge of the indoor mouse population growth, I might be able to take a spin to SoPo...sylvie...  I will only be gone three and a half days, so I am hoping that no calamities will have time to foment.
In between my forays to medical professionals, I have managed to get three and a half raised beds weeded, garlic planted and mulched.  I still hope to weed the rest - the weeds were so bad (having gone to seed) that I am putting a layer of cardboard on most of them.  It will be a weedy spring.

Last week, there were some absolutely beautiful days.  I have started planting perennials that will attract pollinators.  There's nothing quite like working in the garden, along with the bees.
And look what I found!
I had picked up four zucchini seedlings shortly after my second hip replacement and had hobbled out to plant them in the only clear(ish) bed.  I wish I had written down the type of squash because that is all I want to grow from now on!  Even the ones that got away from me weren't all seedy.
Autumn has definitely arrived and it was a paler version than usual.  I think there was too much rain and have read of various creeping maladies that made trees just dry up and drop their leaves.  The last storm that went through pretty much stripped the rest.  I think that Autumn is my favorite season.  The air is clearer, light has a certain luminescence, the geese honk their way through the sky.
And... 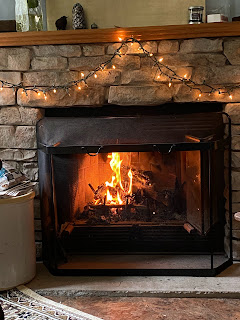 Happy fall, y'all!  I'll check in after my road trip.
P.S.  Mom is due home today - she was in for observation.  You can't be too careful with these 98 y/os. xo

What is wrong with this picture? 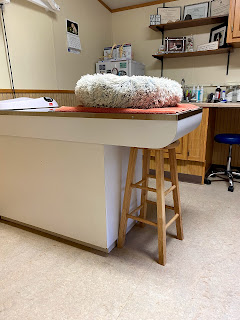 If you guessed that the dog bed was not in its usual place, then BINGO, you're correct!  It has been used as transport for a week.  No sooner did I go on and on about the noodle, he came up lame one morning.  The biggest problem with Peanut is that there is so much drama, it is hard to figure out what is hurting and how much.  I had to carry the sack of potatoes to the car (in the above bed so as not to distress him) and then a very nice vet tech toted him into the clinic.  The good news is that it was less (by a whisker or two) than $500 to find out that they did not know for sure what had happened to his back left little ham.  I've been dosing him with two pain killers and an antibiotic for a week, not to mention serving breakfast and dinner in bed.  While he can now get around pretty well, he still cannot bear his weight on the leg.

You can't make this stuff up.
What have I been doing other than acting has handmaiden to the invalid? 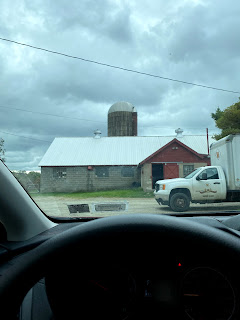 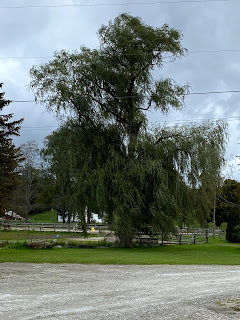 Buying chicken feed from the local grainery.  Enjoying the cooler weather - although I could easily do without the two-day rains.  Coming home from Vermont this past Sunday, I took a quick photo of the clouds that mirrored the mountains. 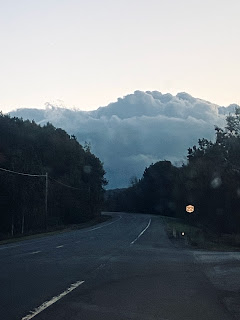 Marianne gave me these beautiful eggplants, so I have been making baba ganoush every week. 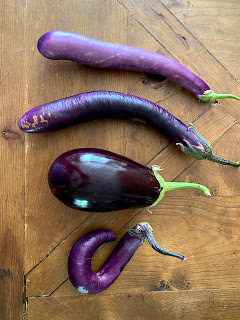 I also finally made ratatouille and polenta, trying to squeeze every ounce of summer goodness into the short time we have before full-on fall. 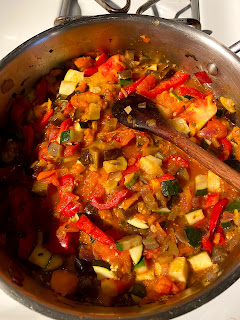 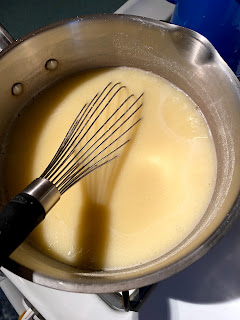 I do have to admit that the idea of sweater weather coming up is making me giddy with joy.