This pretty much sums up the past couple of weeks. 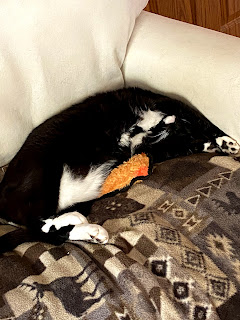 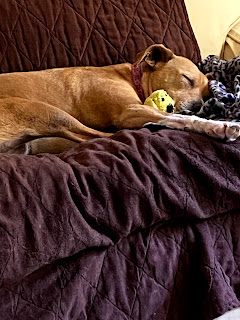 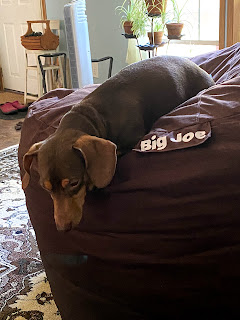 This is the result of weeks of no rain, temps in the mid- to upper- 90s with humidity percentages to match.  We are a family of damp lumps.  I manage to rustle up the strength to water the garden, do chores and that's about it.  It has been one gloriously bright, hot, sunny day after another and I am damn tired of it.  I have tried leaving my car windows open overnight, putting sheets on the line overnight - all have created rain events in the past, but not now.
If this keeps up, I will either cut the size of the garden in half, or pave it over and join a CSA.  Not nearly as satisfying but so much easier on my old self and my shallow well.
On the upside, Slimmie is still talking to me, after being hunted down and tortured with oral meds twice a day for two weeks.  We have discovered that the only food he can keep down is a prescription diet that, no surprise, costs more than my monthly food budget.  He is worth every penny.
The grass is crunchy, I am glad I have hay for the sheep, and it's too hot and dry (as in cement-like dirt) to weed.  We are supposed to get some rain within the next few days, but I have little faith in weather predictions.  Once we get a decent rain, I can weed and then I will trot out pictures of the garden.  It has been doing pretty well, considering.  I have been enjoying mixed greens from my cold frame bed - spinach (at last!), arugula and Romaine.  But I am hovering over my summer squash plants - zoodles!  I need zoodles!
My sisters, nephew and family* and I, had our first Zoom 'meeting' on Fathers Day, raising a glass to the old guy - our first FD without him.  It was fun and even our mom joined in (she thinks it's 'magic').  We are entering our new reality, one tiny step at a time.
*They had the nerve to join from poolside, the cheeky darlings...
Posted by Susan at 7:26 AM 14 comments:

It has occurred to me that, should I go missing, I must either give more thought to what I wear or embrace the eccentricities that are flourishing during this period of isolation.  If I were to tottle off today, the APB would read:


Of course, there are upsides to the description - I'd be easy to spot in a crowd.


I spent a great deal of time this chilly morning (yesterday it was 34 freakin degrees!) in the middle of a hummingbird kerfuffle.  I have been replacing their feeder every other day but I neglected to put the new one out last night.  They were not pleased.  A male red-throated hummer confronted me (it was rather terrifying, actually) about a foot from my face and maintained that aggressive stance until I  replaced the empty feeder with the full one.  Geez.


I would have loved to have stood outside longer, listening to the sweet burbling of the resident wren, but I couldn't hear myself think.  The back fence to the chicken yard was dotted with big, fat crow babies.  Lordalmighty.  It looks as though we have another bumper crop of them.  I suppose, if you are a crow parent, you learn to ignore the incessant noise, but it can wear on your last nerve.


I am going to do a garden tour to allay any fears that my garden is toast (thank you for your concerned comments... :) ), as long as I can conjure up photographs.  My old laptop is not getting along with my new phone, and is so far refusing to recognize any pics taken after May 26.  Fingers crossed.

As I don't want to bruise my brain and try to accurately recount the activities of the past umpteen days of radio silence, I will just go along - willy nilly - and give you all the sordid details in no particular order.


The garden, she is done.  Or mostly done.  About 90 percent.  All that is left is some seed-sowing and re-sowing (dratted red noodle beans!), and mulch.  Because apparently I now live in the Sahara desert.


The sheep are shorn - and I was not injured this year - hurrah!  That is because I set it up so that I was on the safe side of the fence, while the shearer (youngster that he is) did all the heavy lifting.  I also donated both fleeces (fleeci?) to a local group of beginning fiber artists.  Double hurrah!


The humming birds are here with a vengeance.  Last year, I had to throw out nectar between filling the feeders and this year I can hardly keep up.  I wonder if it has to do with switching to filtered water and organic cane sugar... you think?  Thanks to having access to my yard, garden and deck 24/7, I am able to stand outside and watch the hummers only three feet away.  They are tiny miracles.


There was a sheep breakout.  Luckily, Apria was not aware of it or a party to it - it would have been pure hell to try and herd her back, since she is almost totally blind.  The two fat boys didn't go too far, but it did take some time - and help - to get them back in their fence.  It was totally my fault.  I did not latch the gate.  It took a lot longer to get them moving in the right direction, since my 'help' were cow men and there's a big difference to herding sheep and herding cows.  And, there's Norman.  However, they were eventually tucked back in with no damage done.


My youngest sister and our honorary fourth sister, Babs, were here for a weekend.  Cindy was on her way back to the City, after an absence of over 3 months.  Right in the middle of the protests.  She planned carefully and closed herself into her cozy apartment until the worst was over.  We are still worried about her, as the virus hit her area hard.  We have taken to having a virtual cocktail together every Sunday evening.  My middle sister is back to juggling many balls, with my mother, her husband and a client, and whatever bits of her life she can squeeze in.


I continue to work from home and had my annual review in which, I may oh-so-humbly report, I am outstanding in all aspects.  Or - out, standing in my field...


I have rediscovered the Rhubararita.  I have made copious amounts of granola.  I have rediscovered my love of rice and beans.  I am eating salad from my own garden.  The resident chipmunk, Mongo, and I have come to an understanding.  I leave him piles of nuts, he doesn't eat my lettuce.


As to the furry residents, Slimmie's first bout with vertigo was five years ago.  As you may (or may not) recall, I found him flat on the ground, unable to stand, panting and drooling and crying.  This time, I noted that he seemed to be confused and was crying.  I checked him for injury, but could find nothing.  When he threw up his dinner and then didn't have an appetite, I knew something was wrong.  With all the protocols in place, we can no longer go into the vet's office - you have to wait in the parking lot, with vet techs running to and fro.  My vet called me and said Slim's head was tilted and he was walking in a circle, so the vertigo was back.  I now have to squirt one med down his gullet, twice a day, and crush his pill into his food.  Which has to be soft AND good for a sensitive stomach, so he is greatly enjoying his expensive prescription diet.  He is being so good about it, the little lamb.


On the other end of the spectrum, Peanut has a yeast infection in his ear.  He is definitely NOT a lamb, when it comes to treating it.  Much chasing and rassling proceeds his ear meds.  Then I and all things within a four foot radius are covered in ear med droplets.  So. Much. Fun.


Lovey, feeling left out, threw up three times on the sofa cover.  Apparently, she ate her bully jerky too fast.  I am working my way through the wine cellar.


(Sorry for the absence of photos - mine are not appearing in Blogger, for some reason.  I will try and work it out and put them in the next post.)
Posted by Susan at 3:25 PM 13 comments:

Thought I'd pop in to announce that I am still alive.  The longer post I had planned for today got forestalled by Slimmie getting hit with vertigo again.  I will be back! 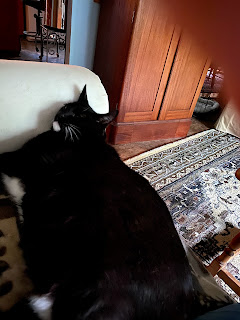 p.s. The quilting books are actually packaged and in my car!  I'm hitting the PO on the way to the vet.
Posted by Susan at 2:20 PM 10 comments: