The power of prose.

Yesterday, we were hit with high winds and a snow squall and it made me nostalgic. 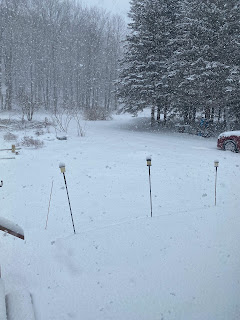 Way back in the day, on the cusp of my move from Ohio to the Netherlands, I had rented a room from a friend while my crated belongings steamed their way east.  She had a Victorian monster in the original settlement of Cleveland - Ohio City, on the Cuyahoga River.  This was one of those neighborhoods that was just beginning to rise from decay to decadence.  It wasn't even half way there at the time.  I sat in my garret room, surrounded by an alarming array of antiques and collectibles (alarming because a- they weren't mine, b- they were mostly fragile and c- I'm not known for my graceful movements), spending my remaining stateside days reading.  I happened to be reading A Year in Provence by Peter Mayle, while a blizzard raged outside.  About halfway through the book, I was overcome with a desire to dine on baguettes and Brie, washed down with a nice fruity (French) wine.  When I say 'overcome', I mean it.  I pulled on boots, hat, scarf, gloves, wool coat, and fought my way blindly through the snow until I reached the West Side Market, some 12 blocks away (including a bridge).   Let me say, here, that I miss that market something fierce.  Of course, the market was less glitzy when I was a customer, but it was like having a little pocket of Europe in your backyard.

I got my baguette, my cheese and a cheap bottle of vino and battled my way back.  I finished the book, sitting on the floor with my repast.  Heaven.

For most of my life, I have experienced Valentine's Day much as Charlie Brown experienced kicking that football.  Hope snatched away, right in mid-kick.  (Wah, wah, wah...)  Forget a sweetie pie, I've got friends who love me (you know who you are...xoxoxo).  To make this VaDa (to differentiate the day from the disease), even more special, I found out I was the victim of IT (unfortunately, NOT interterrestrial travel, but Identity Theft.)  I would have much preferred the former.

I suppose I should be happy that the perpetrator is not the sharpest tack in the box.  He/she opened a checking account online with another bank, in my name.  Fortunately for me, they had checks issued to my home address.  I have spent the greater part of today going from that bank, to my bank, and burning up the phone lines to all three credit bureaus.  I also reported the fraud to Federal Trade Commission and have tried to contact a human at the Social Security Agency.  After three tries, holding for 45 minutes each go-around, I gave up for now.  I'll tackle it early in the morning and hope to get a jump on the 500 million people they service.  It grates my fanny that this happened, but it was only a matter of time.  I am seriously considering life as a Luddite.

On a sunnier note, we celebrated VaDa early and this is what made it special:

My youngest sis and her son came up from The City to spend the weekend with Mom.  At 98, we celebrate every day and every occasion.
I am so looking forward to Farch.  At least if it is less icy than January/February.  If it's not, it can go someplace else.  Just when I think I'm making headway on the ice accumulation, we get a spell of warmish weather, followed immediately by frigid weather.  I bet we have well over two inches of ice under the latest layer.  There was a lot of tree damage during the last ice storm and it looks like i may have to wait until April to clean up the branches. 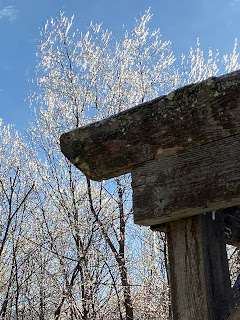 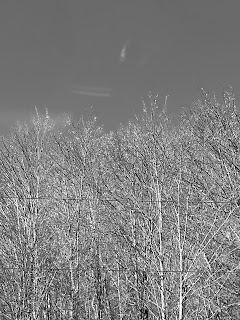 I have the grid paper, garden journal, garden notebook and seed collection out on the dining room table.  I am ready for green things! 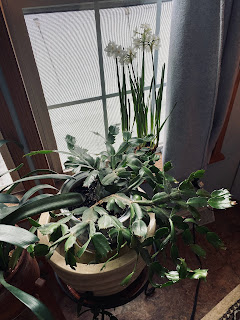