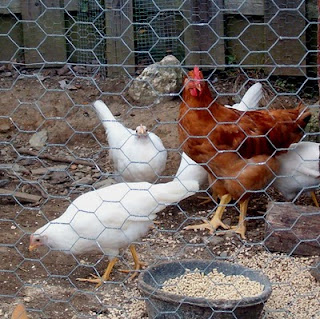 I'm always surprised at how quickly a discussion on the subject of which breed of chicken is best to raise for meat can escalate into an argument.  There seem to be two camps - The Slow Grower Camp and the Cornish X Camp.  We'll condense them down to initials to save my poor carpal-tunnel-inflicted hands.  The SGC seem to feel that CX are Frankenbirds, a cruel mutant breed concocted in the labs of some cold, unfeeling megacorp.  While it's true that they are not the most appealing birds, they are not so horrible.  The chicks are as cute as any chicks.  They just grow at an amazingly rapid rate.  The SGC feel it is more natural, more humane, to raise only breeds that take their time, growing large and meaty at a much slower rate.  The CXC seem to feel that the SGC are a bunch of tree-hugging ninnies (kidding!!!!).  Why on earth would you continue to feed, water, house, and protect meat birds for weeks and weeks?  Where is the profit in that?  The CXC are proud of the fact that they can go from 0 to 5 pounds, cleaned and dressed in a little over 8 weeks, while the SGC are still filling up feeders for another 4+ weeks.  As for me, I tend to be wishy-washy on the subject.  I also tend to fall for whatever compelling story someone tells me in defense of any number of farming topics.  This year, I did not listen to my friend Marianne, who swears by the CX.  She sits squarely in the middle of the CXC.  Instead, I decided to raise Slow White and Slow Red meat chickens.  That was my first mistake.  There was no "breed" name attached to the chick descriptions.  These were ordered from a local feed store and they are about as generic as they can be.  As you can tell by the picture (this was taken today at approximately 8 weeks of age - pardon the chicken wire view) the Red cockerels are twice the size of the Whites, while the red pullets are lightweights, too.  Just look at the legs to get a sense of the size/wt. difference.  As a matter of fact, I am getting suspicious that they've foisted some White Leghorns on me.  At this rate, I will be raising the red pullets and white whatevers for another 6 months!  I've decided to hedge my bets and will also raise some CX this summer.
As far as the flavor factor, every CX I've either raised or purchased from a local farmer has been excellent - large, tender and full of flavor.  Last year I raised some French Reds - another Slow Grower - and, while they took much longer to reach butchering weight, they were equally tender and large.  And their flavor was more 'chicken-y', if you know what I mean.  Given my overloaded schedule, small acreage and the price of grain, I think I will stick to the CX.  It's work enough to keep them fed, safe and happy for 8 weeks.
Posted by Susan at 4:35 PM

Do you butcher them yourself or find someone to do it for you? I think I would go for the CX too. Less time to get attached.

I have not butchered my own chickens yet, but that is on the table (pardon the expression) for next year. I take them to a small processor who runs a clean, humane business. I learned early on that I needed to keep an emotional distance from any animal that was destined for my table. It doesn't always work, but it's better now that I have a few years under my belt. I just focus on the end product.