Mostly, it was labored breathing weekend, as the humidity was so high it was like breathing through a wet sponge.  I'm not even going to ask why - why, when a nice, long weekend comes along it does everything in its power to be difficult to work in.  It's just because.

My typical errand-filled Saturday was followed by making apple cider with Melanie, which was FUN (and delicious....) as she provided the Macs, Marianne's trees provided some tart drops and some equally delicious Honey Crisps.  We took the apple mash up to M's pigs, who were thrilled to get the treats.

I also spent a considerable amount of time dealing with my tomatoes - the small tomatoes are erupting faster than I can pick them.  While I dearly love the black cherry tomatoes, they have been splitting almost as soon as they start to ripen.  I have to be very vigilant in order to get even a few that aren't spoiled.  This year I tried a red pear-shaped heirloom from a local grower and it's so-so.  Same splitting problem.  The grape tomato plant is buried in the jungle of larger plants so I really have to bushwhack my way in to find ripe ones.  I have been freezing the smaller tomatoes and dicing and canning the larger ones.  I finally got a grip on myself and I am NOT going to go pick my usual bushel of Romas.  I have enough canned to last me into next year. 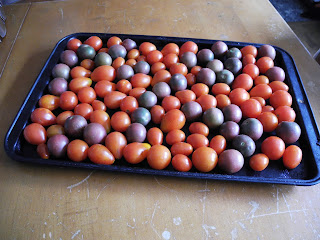 I made a stop at the local farm stand (well, local as in less than an hour from me...) that has the you-pick tomatoes and peppers for their sweet corn.  I was thrilled to find their summer melon sale was in full swing - buy one large bag and get the same free! After giving my parents a few, and the neighbor who cuts my grass some, too, I still had a few of my own: 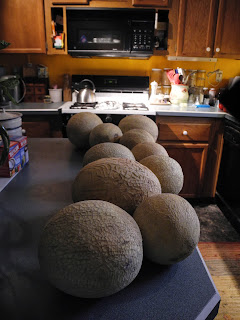 Yet another bounty to be dealt with.  But what sweet labor that is...

OMG--do you have enough melons? LOL! What a sweet mess to have to deal with. Are you freezing them? Drying? Making booze?????????
:D

I wish we lived closer, I would have given you all kinds of melons.
One raised garden bed is just producing melons (I didn't plant any seeds). I think the seeds came from my compost. The melons are real sweet and taste amazing.

Send some of that moisture this way!!!

I'd guess the splitting of the tomatoes is due to all the rain. You may want to resort to picking them before they are full ripe and let them finish off on the counter.

So, how do you "deal with" the cantaloupes? I've never seen anyone do that before.

Sue - I don't know. Let me check... YES I DO!!! I am going to freeze some of them - and drying is an interesting option. I'll have to research that. Melon wine? Why not!

TL - If you find something interesting, let me know! Yes - the chickes get a kick out of the tomato 'bombs' that are lobbed over the fence into their yard.

Sandy - Wouldn't that be nice? I love volunteers! And, for some reason, they always seem to be healthier. I tell you, I would send you ALL of this mess if I could.

FFG - Yes, there's too much moisture going on for too long. I pick the ones that are just starting to ripen, but there's been so much water that even those are splitting before I can get to them. I think the real problem is that I over planted. Again. I plan on cubing and freezing some of the melons (future smoothies) and might look into drying some, as Sue mentioned above. I just couldn't pass up such a bargain. They are delicious!

What would I do with those luscious melons? Sit down with a gallon of vanilla ice cream, half and seed a melon (or two or five) and eat until I ran out of ice cream. Or melons.

Our humid, hot weather has finally gone elsewhere. Still plenty warm but the lack of humidity is HEAVENLY!

We had a moonsoon rain today and 85, sucks! We needed the rain, but too dang hot!!!

I wonder if you could make Melon Cello instead of lemon .... daughter just sent me some blackberry, she also makes lemon and cherry.

I just looked that up - it sounds wonderful! Hmmm. It's worth a try - I just happen to have the ingredients....