It was a busy, productive weekend.  At this time of year, it's good to have inside and outside lists, given the vagaries of the weather.  I was rather shocked to find that both lists are almost at the point where they need chapters! 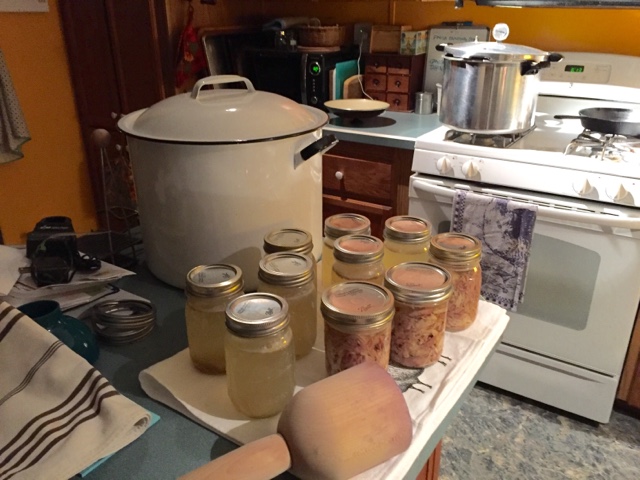 I had dispatched Fred the rooster last weekend and canned him up - 7 pints broth and three pints meat for me, two and a half quarts of broth and bits for the kids.  I also made three half gallon jars of blueberry kraut - now I have to get the purple stains off my neighbor's pounder...
Neighbors keep dropping off apples so I need to get back in applesauce mode.  It will be good to put away the two big canners and get my kitchen back!
I scored a little one-cup coffeemaker for $3 on Facebook and six potted geraniums on Freecycle!  I am hoping to fob off three of them on unsuspecting friends, as it's getting a little "dense" by the one and only spot that gets good light.  It's downright forest-y!
Posted by Susan at 1:49 PM

We have only one rooster to butcher this fall (maybe he and Fred can meet up and keep each other company in that Great Chicken Pasture in the sky) but Chicken Mama is seriously contemplating doing in her whole small flock because 1) they're all geriatric, and 2) haven't laid a single egg in a very long time. No sense feeding them all winter. We'll help her butcher and then she'll order new chicks with us in the spring.

I'm into the apple production business, too. Sorted through the two big boxes we were given a week or so ago, and have a bunch with bruises or spots that I'll use up first. A pan of Apple Crisp will be making an appearance on my kitchen counter later this afternoon.

And, yep, sauerkraut is on the agenda, too, using some of the cabbages we harvested yesterday. Hmmmm. Why aren't we living in close proximity so we can do all these similar tasks together? Huh? HUH?

Another thing we can't grow down here is apples. Sometimes we head to NC & pick up a bushel or 2, maybe next year. Glad Fred is being put to good use.

I miss having productive canning weekends these last several weeks with working at my parents home, getting it ready to sale. Can I live through you vicariously?
Having homemade canned broth and chicken in the pantry always puts a smile on my face.

DFW - We are 'suffering' from a bumper crop of apples this year. I agree - this is the best use of Fred I could think of. He was way too rough with the hens and I'm hoping that Barney will be better. Or else.

Sandy - That is quite a job you have there. Of course you can live through me vicariously! If you dare.... :)

Let Fred's demise be a warning to all of us not to get on your wrong side!