(I bet some/most of you are surprised I knew that term!  Interesting, isn't it, that a word that once meant something sub-standard, now is all the rage.)

While last year's attempt at winterizing my living room windows was a success, it was a marginal success.  I had sewn flannel-lined shades that did, indeed, block most of the cold that vibrated into the room, but they were awkward to fold up and tended to block a lot of the already puny wintery light.

After mulling it around off and on, I came up with another (bright) idea.  Fleece curtains!  While I am sure that there might be some who develop a nervous tic at the mere thought of fleece as window dressing, I managed to find a nice, medium-weight dove gray fleece on sale when my DS Connie and I hit JoAnn Fabrics some weeks ago.  Since there would be a small amount (less than a yard) on the bolt after my purchase, I got a larger discount for buying the whole thing.  Woot!

I decided to make it as easy as possible, with minimum sewing so that, in case it was just awful, I would still have most of the fabric with which to make jammie pants.  It pays to be one step ahead when you know not what you do. 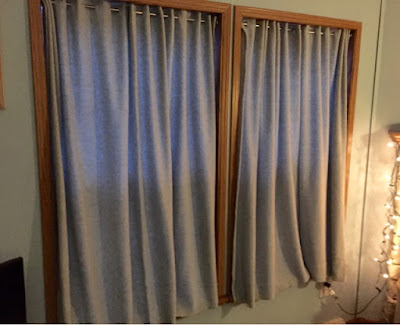 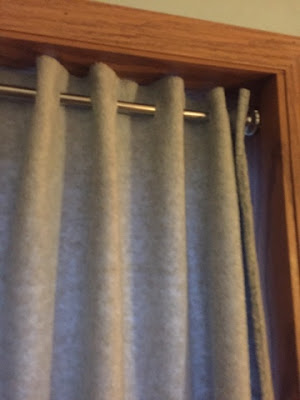 LOVE THEM.  And they required no sewing whatsoever.  I measured the window, cut them to length, and folded the top over an inch and a half, then cut small slits at regular intervals, through which I threaded the tension rod.  Omg.  They are so warm and cozy and don't look half bad.  As a matter of fact, in order to help Slimbo work through a relapse (this vertigo stuff is never-ending, it seems), I dug out a piece of dark brown fleece with little white paw prints and did the same thing for the cat room window.  When light comes through the little paw prints, it gives the room a rather dappled effect and lets just enough light in that it's not cave-like.  Cool.  Slimbo has rallied, although I am sure it's not because of the curtain or that he's developed a liking to the antibiotic sludge I squirt down his gullet twice a day.
Posted by Susan at 1:19 PM

Thank you, Mrs.DM - I am very happy with how they turned out!

OMG! There you are! :) Yes, I feel like Scarlett O'Hara - if the rebels come, I will haul them down and sashay out in some nice pajama pants.

Impressive. I wish we had JoAnn on this side of the border. Sorry your little guy is still sick.

I don't think the ingenious, lovely, clever window coverings could look any better. They even LOOK warm! Sometimes the easiest solutions (no sewing!) are the very best. (Except, of course, for those of us [that would be moi] who insist on doing things the hard way!)

Nice job on the curtains, they really look like you took a sewing machine out and made them. Great idea with using fleece, it will help cut the light and any winter drafts.
What may also help with drafts would be to make a curtain to hang over your doors leading outside. I've actually hammered a nail on each side of my doors just above the frame and hung large wool blankets up to cover the entire door and frame. No drafts coming in the doors!!! I do this every winter even though I have weather stripping, this just helps even more and cuts on the electric bill.

Very very nice! How ever did you think of that sew-less design. Pure genius. I'm ripping off your idea for the cold drafty guest room. Thanks for the post! Happy Holidays! :-D

I had to ad this comment....I am going to steal your idea for the bedroom curtains! PS: I made the hasselbach taters and WOW!

I am definitely going to have to try that for my front room. Maybe even the kitchen. When it's a bad winter, I can feel the air coming through.

Great idea! I have insulated curtains on our (hot) west windows, and they really help in the winter too. Posting this on my DIY pinterest board! :)

I have been looking at thermal curtain options for days! This is amazing and EXACTLY what I have been looking for, an inexpensive way to insulate our RV windows by sewing/or not my own curtains! I am a little concerned about rolling of the edges and I think I might crochet a border around the outside to give it a bit more weight. The great thing, as you have mentioned, is that if it doesn't work, I didn't spend a fortune and I can always reuse the fabric for other things. THANK YOU!

Very cool. How did you measure the fabric so you had enough it would ripple like that?

I just lucked out with the width of the fabric!

Could you post a photo of the cat room window ?