On the ball or under it? 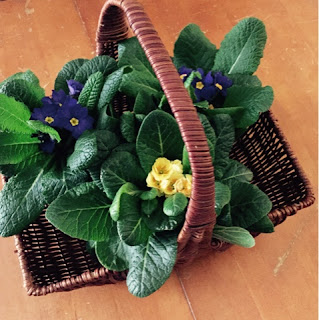 Since there seems to be a rather large lull in winter right now (JINXED), I quit procrastinating and dragged out my garden planning accessories this past weekend.  Those being:  binder, graph paper, mechanical pencil, seed catalogs, seed packets, notebook.  I cleared off the dining room table (except for my centerpiece - above - which I use for inspiration), made a pot of tea and took my seat.  Then I got up, gave the dogs crunchy treats, meandered about for a half hour, and forced myself back into my chair.  Hello Brain!?!  Hello!?!

Every year, I promise myself that I will not buy one more seed packet, as I have TONS of seeds that still have life in them.  And it's not like I am planting for a family of six.  Nevertheless, I take my garden very seriously, as it provides all of my fresh produce and most of my preserved (canned/dried/ frozen) for the year.  Last year, for some reason, I never sat down with paper and pencil and plotted the garden.  It was a big mistake.  Everything went in rather willy-nilly and it showed.  Sweet peas planted on the bean trellis were engulfed and stunted.  Cukes were put in a hard to reach place and were the cause of much...colorful language.  Beans were disorderly.  Peppers were puny.  Tomatoes fell down.  Basil was squeezed out.  It was a mess.  Because there was no order, it was difficult to keep track of what did well and why.

New last year were tomatillos.  They grew like crazy and produced tons of fruit.  I think I got a half bushel from two plants.  However, other than the rather exotic thought of tomatillos, I did not care for them as much as I thought I would, so they are off the list for this year.  New this year are leeks.  In my quest for a passable carrot crop (2016 or Bust!),  I have decided to dedicate one bed to carrots and leeks (because they are best friends).  I am going to dig in a pile o' sand into that bed, add a pile o' llama beans and hope for the best.  This will include actually thinning the seedlings - rather than thinking about it.  I am weak.

Last year's potato crop was very uneven.  The fingerlings were disappointing, while the Red Norlands were the size of large Russets, but there were few.  I've ordered potatoes from a new source this year - The Maine Potato Lady - in the hopes that I will find a good, organic seed potato that will produce.  I grow my taters in tater bags and in tires, which seems to work well.  Usually.

The chipmunks (buggers) made harvesting my strawberry crop almost impossible.  In order to be able to out maneuver them in order to get to the ripe berries before they did, I had to resort to putting bird netting over the entire bed.  This made picking them a real pain.  I ended up ripping holes in the top so that I could reach most of them without having to remove the covering each time and replacing it and pinning it down.  Needless to say, the weeds thought this was marvelous and overtook the entire bed.  I had to rip out the plants (most of which were on the old side, truth be told) and will replant this spring.  The Chipmunkinator is coming out early.

Beans.  Well, those purple pod pole beans were superhuman - or superbeanan!  I have so many seeds from these beans that I will gladly send seeds to whomever wants a hugely healthy, thriving pole bean.  Just send me an email with your mailing address.   Seriously.  I have two quart jars full of seeds.  I am going to plant whatever is in my seed stock this year - some are a little dated, but since I only need a few plants of each, I am sure there is enough viable seed stock to set me up.

My goal at the end of this new gardening season (may it be the best yet for everyone!) is to end up with enough of my own seeds that I do not have to buy anything but seed potatoes and onions next year.  This may mean that no seed catalogues can enter the house.  I am, as I said, weak.
Posted by Susan at 2:31 PM

We were overrun with chipmunks last year as well. Hubby began setting large RAT traps all around my pea patch. He caught 27. Let that number sink in a minute. Who knew there could be that many on one piece of property. No wonder I never saw a single pea last year.
I agree with the tomatillos---sounds so exotic, healthy, ....cultural. And yet.....no thank you.
Have a great week, Susan

That's a very smart idea to plan and draw out a garden plan before planting! Interesting about the tomatillos doing so well. I'm not sure how much we'd like them either but I am intrigued by something that might grow and produce well. I have a hard time thinning carrots or anything else too. I just hate to throw out what could be food and a beautiful plant but the recommendation is always on the seed packets for a reason I guess. lol I've never had a purple pole bean. Are they good/tasty? We also have the problem of always having seeds we don't plant and buying more. Funny how that goes. Happy gardening! :-)

i grew so many tomatillos i ended up throwing them out. i could only turn so many into salsa. i love growing okra though. it grows well and it is wonderful freshly picked, split and served uncooked with cracked salt and pepper. so so good! why can't we grow carrots? all those books i read when i was little had perfectly pulled carrots from the garden and mine do squat. it must be the thinning, though last year i thinned mine carefully and still got mutant carrots. i think i am planting the wrong kind. though we haven't had winter, i guess i better start thinking about my spring garden! i would love to try your beans!!!

Wow, what an early bird! Good for you planing ahead. I wish I had your space!!!

Sue - Geez! I thought trapping 18 was something. I'm using a method my neighbor uses - 5 gal bucket filled 1/2 way with water, float sunflower seeds on the surface and put a board up to the edge. Bingo.

ATO - Yes, the beans are very flavorful and tender but you have to be diligent in picking them early. I agree with the thinning problem - all those plants!

Jaz - Great! I will get some in the post to you. I've never tried okra - mostly because I'm not a fan of it cooked. But, if it can be eaten raw, that would do it for me.

Nancy - You plant a lot in a limited space! I am always amazed at the abundance of your produce (and fruit - though I'm more amazed and envious at your fruit crop... :)

We don't plant as much as we used to but nothing goes to waste. Mostly now we do a salad garden.

The carrots will love the sand.

Where did you get your seed potatoes last year?

And we are trying really really hard not to look at the seed catalogs for this year!

Hey! I'll be coming your way tomorrow (Saturday)... to pay my Berlin taxes! If you're around - (and I'm sure too busy for this) - I'd love to stop by! (and take that green teapot off your hands. That thing is bee-yoo-ti-full!). I know it's short notice, so if I don't hear a huzzah, I'll just drive on by.

I find I do much better with a written plan too; otherwise, I plant too much! My new crop for this year will be Anaheim type peppers for roasting and freezing.

I draw out our garden every spring, and keep it in a journal. That way we don't plant in the same place. Last year's was terrible, so that has to mean this year will it will be exploding.