Why is it that, after bearing through the endless winter up here, with the only thought keeping me going is that of "Spring"?  Glorious "Spring".  Then "Spring" arrives and it almost kills me.  I apologize for the paltriness of posts on this site.  I literally have just enough time in the day to get things partially done.  I have not given up my purge - seven more victims will be forthcoming - but, between the yob, sheep, llama, chickens, ducks, Nuggets, house problems, dogs, cats, chicks, it has been...well...tight.  However, there are bright spots. 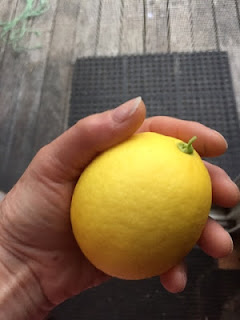 Such as my one and only - but, what a beauty - Meyers Lemon.  There were and are plenty of blossoms on the tree, but I have been too busy to put my bee costume on, so only now are those blossoms out there for the real thing.  The fig tree, unfortunately, which was going gangbusters, has apparently been shocked by being outside.  I need to repot the thing - which is on The List.  This would be the BIG List - the one in volumes on 3-ring binders.

Only one week stands between high stress and medium stress.  The Nuggets go off to 'camp' a week from tomorrow and I will be so happy not to have to slog through that creepiness every day.  The grass was growing up under their netting and I could not find the time to weed trim under it.  What to do...SHEEP!  I pulled the netting down last night at dusk and swaddled the hoop house (thinking - what?  That something would be kept out by UN-electric netting?) and let the sheep into the middle paddock.  This morning, the whole area was trimmed for me.

We are taking time to celebrate three birthdays tonight.  Scrappy Doo is 16, the Pepperoni (who resembles a bratwurst in a black angora sweater) is 12 and Lovey is 4.  I had been saving a small, local, grass-fed ($$$$$) steak for just such an occasion.  The Pepperoni is, however, on a diet, so he will be getting a lean smidgeon.  I'm sure I will hear about it.  If the stars are aligned, I will get a video of them.  Here is a (sorry - very dark) clip of Mr. Bunny (Scrappy) mixing it up with Lovey.

I will try to do a garden update soon - it is mostly planted, but there is still a raised bed that needs dealing with.  And then, there are the weeds.  Lawsy.  I am putting the sheep in the back of the house, so need to clear a swath for their netting.  And I need to do it before I am knee-deep in grass.  Due to a series of unfortunate events, my handyman has not finished the Duck House - I am hoping he is back next week.  If not, I will finish it myself.  Much clean up is still needing done, I need to get some flowers planted around here soon to get me through the bleaker moments.

Speaking of weeds, the chicks are growing like crazy - I did lose one.  I think the stress of almost five days in a box, being hurtled around the country was just too much for it.  The remaining bunch seem to be fine.  Another pair were a little peaky but I gave them a tiny dollop of honey and that seemed to do the trick. 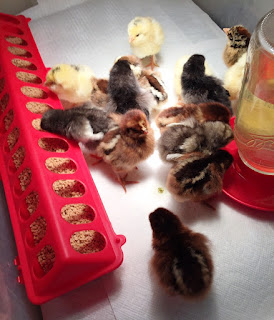 It's an interesting group - Salmon Faverolles, Partridge Rocks, Araucanas, Jersey Giants, and a Free Exotic Chick (Murray McMurray speak for 'rooster').  I have yet to look up breeds to find out what he may be - he's got a Cleopatra Eye-thing going on.  I am also scheduled to pick up six Cayuga ducklings soon.  Maybe I should just go out back and flog myself?

Adding more fuel to the fire. Is the word "No" in your vocabulary? No-it is not....which, I suppose, is what makes this all so interesting.
Stay sane, dear lady. And hope you get your duck house done.

Hang in there, Susan. There are probably many of your readers who, like myself, wish we could run over to lend a hand for a day.

Glad you have got the sheep earning their keep. Have they begun bleating for coffee breaks and holiday pay yet?

It amazes me how far chicks get shipped. Tough tiny things..
Scrappy sure wasn't acting his age in your video. And sheep do make good trimmers! You always make me think I really do not do much!

It may be a one and only, but it's a beautiful lemon!

Medium stress is good . . . compared to high stress. Keep striving for that. ;o}

Amazing that your chickies made it after being on the road for five days. Goslings or ducklings would never have been that tough.

I don't believe Scrappy is having his 16th birthday. What do you feed him? Can I have some?

A Meyers Lemon wooohoooo!!!! I'm so excited for you, do you have plans for this lemon?? Stress isn't fun at all, I say maybe you should jump up on the coach and just release the stress with a loud yell. Your dogs may look at you like hey.....she wants to play on the coach. I love your video of Lovey, and Scrappy playing. Give all your pups a scratch on the back of their heads for me. Happy Birthday Furbies!!!!

Your chicks are so cute, and a great variety. I'm sorry to hear one didn't make it. Cayuga ducks, are they black with a hint of green shine on their feathers?

Hang in there Sweetie, the stress will pass. Sending hugs your way.

Well, if you can't spoil the dogs on their birthday with an expensive steak, when can you?