It's been quite the busy week.  Summer arrived on Thursday with temps in the 90s.  Then it abruptly left, being shoved out to sea by a fierce thunderstorm.  Upon the LLF, there was lots of hustle and bustle.  And most of it was not done by yours truly.


Yes, the skies cleared and the pergola-building commenced!  This  young man delivers firewood at 5:30A in the morning, then works for his father doing construction and landscaping, then works for my dairy farmer neighbor, then does odd jobs to support his young wife (and their soon-to-be-born son).  He had never built a pergola but was up to the challenge.  He showed up every night after his dairy farm job and worked until it was too dark to see.  He started Thursday night - and as we were talking, we glanced up and saw that the sky was black to the east and there were an increasing number of lightning flashes.  Between the two of us, we were able to hustle his tools under cover and he made it home in his little 4x4 before the storm hit us.  Meanwhile, I goose-stepped the dogs out but was unable to get my agitated ducks into their hut for the night.  At least they were behind a fence.

I had asked him to leave more space than is normal between the crosspieces on top.  I had two motivators - I didn't want it to be too shady and I am too frugal to spend that much money on lumber.  I opted for a rustic structure, so this is built in rough-hewn hemlock.  I'm still contemplating whether I will just polyurethane it and leave it in its natural state, or stain it a light oak and then polyurethane it.  If I need more shade, I can suspend fabric across the top and on the hottest side.  The possibilities are endless!


Sunday was D-Day on getting my garden in.  It was the only day I had to do it.  I walked out the front door at 8A with seeds, gloves and tools and didn't stop until 4P.  I usually wait until Memorial Day weekend to finalize my garden, but I figured it was only a matter of one week's difference.  Besides, next weekend there is rain forecast for Friday, Sunday and Monday.  That only leaves Saturday and it is going to HAVE to be Coop-Cleaning Day.  Joy.


At one point yesterday, I was in the garden, Billy was on the deck and -- the Lithuanian Lawn Guy showed up! 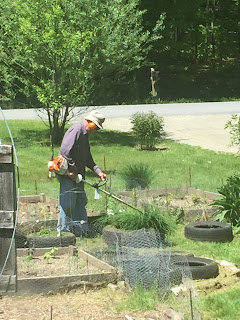 He never lets me photograph him, so I went into stealth-mode.  He mowed my lawn and weed-trimmed the entire garden.  Let me have half his energy at his age - 82.  The dogs were pooped, after trying to keep track of all the activity.  Bertie was asleep by the sliding door (he was totally smitten by Billy), Lovey was dozing on her elevated bed by the front window, chin on sill.  The Pepperoni was conked out on top of the sofa, with a good view out front and back.  I was too tired to take pictures of the garden last night, and this morning it was pouring.  I will try to immortalize my garden in its pristine 'newly planted' state, as this is the last time it will be relatively weed-free!
Posted by Susan at 11:48 AM

Laughing, jealous, and thrilled for you all at the same time!

Nice pergola! But not for shade?

Hi Susan!!! The pergola looks great!!! I'd be the same, wanting more shade and saving money on lumber lol...but you're right, you can make a nice top for it if you want less sunshine. Everything looks so nice in your garden! My body feels like it's twice its age right now, but I've noticed that move it or lose it seems to be happening right now. I sit for a few hours and I start getting sore, as soon as I move around, I feel better!

Michelle, I love the feel of an outdoor room - I have big plans!

Nancy, it provides shade, I just did not want it too shady - I need to provide light into the sliding glass doors over winter for my lemon tree. This seemed like a good compromise - some shade with the ability to make more when I needed it.

Rain, you should have seen me figuring out my lumber list. Good thing Bill is a patient guy. I know what you mean - I was inching around this morning.

The pergola will be heaven, the wider spacing might be better in winter?

oh wow...the pergola is such a great addition! you are really going to enjoy that!

So glad to hear that you are finally getting your pergola built & by a conscientious young being. He sounds like a keeper (glad for his young wife & soon to be child). Please keep the snakes off the vines once they start growing. That's the only thing stopping me from having one built in our courtyard area in the country.

Where can I get a Lithuanian lawn guy to come weed trim my property? You say he's 80? I wonder what his secret is? What direction does your pergola face? -Jenn

Good gravy, girl! Things are a'happenin' on LLF! What a nice start to the season. Your pergola is going to add so much to your living space and be a great addition to your house.

Now about you having your garden all in . . . oh, if only mine were at that state. Besides the frequent rains, my soil is still so cold I'm fearful for any little seeds buried in it.

I'm with Jenn in wanting a Lithuanian lawn guy at my house, too. We got our lawn mowed and all things scraggly weed whipped a week ago and now it looks like it needs it again. Help!

I love sitting under a good pergola especially in the mid morning hours before the sun gets to shining directly between the boards.

That was another consideration, Fiona. If I don't get my snow guards up before winter, it will act as a safeguard, without allowing for too much snow to build up. Or so I hope.

Snakes? Erk. We don't have a lot of them - the odd garter snake is the most I've seen. I don't really mind them, other than they tend to sneak up on one. I would definitely NOT like to have snakes dropping down on me, as I enjoyed an adult beverage.

I'm not sharing! :) He is a gem - can't sit still and so he spreads the love to all the single ladies. The pergola faces east-ish.

Mama Pea, I am walking around filled with angst about my garden - although I know it was a now-or-never kind of thing, it is still early for me. I figure that I still have seeds to replace anything that doesn't germinate, but it's the time factor that I don't have in great store. Vic is a real gem and he is a godsend for us middle-aged single gals.

Ed, my mid-morning hours will have to be limited to the weekend, but I will definitely be enjoying the outdoors more often now. I can't wait!

Wooohooo.....the pergola is done,and it looks amazing!!! I would have done the same thing with the spacing on the wood up top. It's been personalized to your liking :-)
I'm so excited to hear you were able to spend the day planting your seeds and meeting your goals. Now go relax just a little OKAY!!! Give your pups a scratch behind their ears from your Okie friend.
Hugs,
Sandy

Are Bertie and Pepper aware their male legs are not allowed in the house?

It was a relief to get it done! I have them all a good scratch behind both ears from their Aunt Sandy!

They are allowed as long as all eight paws are on the ground and not lifted on something......