Let's talk about the weather. Or not. (And a Winner!)

Seeing as how the weather community seems to feel the need to name every single storm - major or not - I have decided to name this arctic siege "Genghis".   I feel as if I have dropped into a frigid abyss and I can't get out.  And let's not talk about my ducks.  Or the Himalayan Mountain Range of Frozen Chicken Poop in my coop.  Or my levitating dachshund.  Or my electric or fuel oil bill.  This leaves me with not much to talk about.


So, let's not talk about the weather.


We can talk about what we did while we were held captive inside all weekend.


We cooked.  We knitted.  We became addicted to the Grocery Girls podcasts.  We got a year older and felt every bit of it.


The only problem (well, one of many) with living in a 'cool' house, is how to drink your coffee hot in the morning.  If I start knitting, I tend to let the coffee sit and it's cold at 2/3 full.  Not pleasant on a balmy morning of -18*.  I've taken to making my coffee in my Thermos travel mug.  This baby keeps my coffee HOT for hours.  I lurve it.  I managed to get Sylvie's leggings off the needles and into the mail on Saturday, along with a couple of Bad Santa gifties.  On my way to knitting my Poison Candy self-striping socks, I got waylaid by a lovely skein of yarn that had been languishing in my sizeable stash.  This year, I have decided to challenge myself to learn new things and I am knitting my first-ever pair of patterned socks off of a chart.  Ergo, my Monkey Socks:
It is fun - who knew?  While I was hunkered down on New Year's Day, waiting for the temperature to reach the single digits below zero, I was surrounded by mounds of fleece blankets, from which, intermittently, erupted gurgles, snorts and snores.


Slimmie only leaves his self-warming bed nest for potty breaks and meals.  Besides trying to keep everyone inside and outside from freezing solid, I tried a few new-to-me recipes.  There was One Bowl GF Banana Bread - Delish!  The addition of oats made for a very tender and moist loaf - you cannot tell it's gluten free. 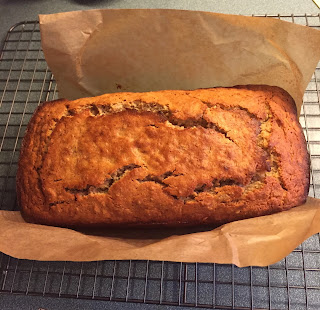 Then there was sweet potato flat bread.  Meh.  The flavor was mild to the point of non-existence and it was so rubbery that, if you bit down hard, your dentures would bounce.  There will not be a repeat performance. 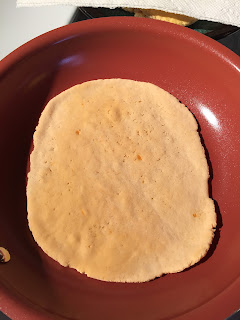 I also made fried calamari for the first time - but there are no photographs because it was late yesterday (after late afternoon chores that, normally, take a half hour and took two hours because - EVERYTHING WAS FROZEN) and I was knackered.  It was a gluten free recipe that wasn't bad.  I order it out every chance I can (if it's gluten free) but had never made it.  I missed the part about marinating the squid in milk overnight to tenderize it, so it was a tad chewy - but nothing like the rubber mats that were sweet potato flat breads.  I baked brownies for the barn and managed to get a half-can each of wet cat food down my barn cats' little gullets before it froze.  Jiminy Cricket.


I also made this:
And filtered this:
I hope everyone is holding up under Genghis.  From the forecast that I glanced at - before it dangerously depressed me - we have yet another bout of Genghis coming later this week and through the weekend (sure, why not?), then we are back up to the low 30s.  In the meantime, Peanut Butter wants to leave you with this sage advice: 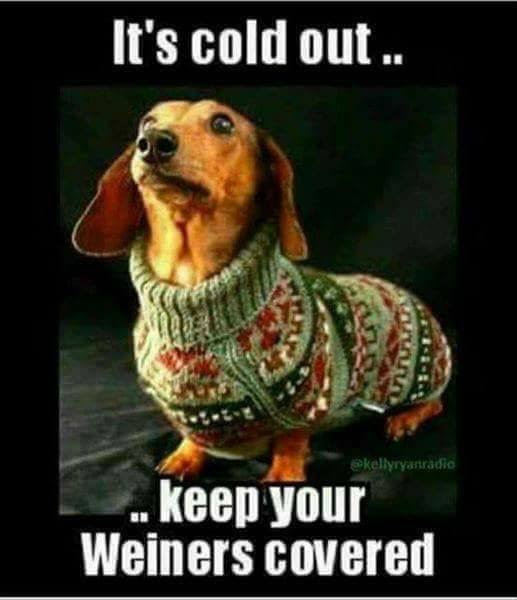 That's a laugh, coming from him - I put his remaining sweater on, turned my back and he had pulled his front legs in - turtle-style -  which rendered him unable to walk.  He was lying on his side, looking balefully at me until I released him from bondage.  Gads.


The winner of the Einkorn cookbook is Charade!  Please email your mailing instructions to me and I will get it in the mail!

What brand of coffee do you use? I am obviously in the need of several cups of it a day. I am envious of your motivation and ambition on a daily basis.

Putting the teapot away, getting the coffee pot out and awaiting your response!

even my little puff ball gets cold on her walks. it turn her energy on full throttle and she runs around like a maniac when she comes back in.

Susan,
Did the coats ever make it and do either of them fit? If they are snug the neon one might keep the sweater in place....making for a warmed weinie.
I'm gearing up for a marathon orange marmalade canning weekend. Gene has a french press that is in its own thermo type cylinder. He loves it. I'll tr to find the brand. You know when I was a kid many moons ago we had these arctic freezes quite regularly. It took 20 min. to get in and out of our gear. My mother would take pity on us and NOT grease the doorknobs if it was below zero.... it is hard on the animals. Stay warm friend

Happy New Year, to you Debra! What are you going to do with all your free time now?

I am with you, Toni! I usually get a dark roast - Peet's or Green Mountain. Occasionally, I'll get a flavored (pumpkin pie spice or - when I am really indulging - peppermint mocha!) I need at least three cups a day to keep me going forward.

It's hard to believe that anything that fluffy would get cold! I'm afraid I would be carrying her everywhere - just because I could.

Theresa - I completely forgot, in all the hubbub, to let you know they arrived! He seems to like the red and yellow one, and hasn't tried to skin it off. The neon one is snug, all right, as he is on the tubby side. I'm letting him run around more, so I'm hoping he will slim down. Otherwise, I am using it as a thunder jacket! I remember those days well. God save you if you fell over in the snow and there was no one around to put you upright. Your mother greased the door knobs???? :)

Gee, thanks, for starting my year off with a lucky win. I'll read the cookbook right away, make a few things, and report to the aforementioned doctor in April. I'll let you know his reaction, because he truly believes there are no safe grains for heart an gut anymore.

I hope you're not going through wood as fast as we are. If this deep freeze keeps up, we'll be breaking into next winter's wood supply by Valentines Day. Stay warm - just like your dogs.

Oops, Susan. I clicked on your "email me" link on your profile page, and nothing happened. I thought I had emailed you a long time ago, but can't find your info in my contacts folder.

That's odd. My email is swomersley at gmail dot com.

So sorry and here is to an early warming event.
Several years ago we were treated to an Artic Blast and it wasn't from Dairy Queen . After a few eeeks of snow , highs of 17 and morning lows of single digits or below add in hauling water buckets to three barns twice a day as all hoses were frozen I understand your pain.

It was beautiful but after about 5 days in it was "well *that* was nice but it can go now".

Best of luck to you and the critters.

You take such good care of your furry buddies. They are lucky ones, for sure.

Thank you, dear Sweezie, for another post that made me laugh. I needed it! We're staying warm, but it's not without a bit of effort. Hardly making it above zero during the day and way down, down, down over night. But those AWFUL winds have stopped (may they come back sometime in spring time . . . if they have to) so that makes me happy. There was a while there when I could swear the wood I put in the stove was being sucked directly up and out the chimney. Temporarily without my warm-blooded husband to keep me toasty in bed at night, I'm wearing tops and bottoms of thermal underwear under my p.j.s to bed these nights. We gotta do what we gotta do!

I love the idea of coffee in a thermos or thermos mug. I usually set my cup on top of the woodstove, which gives me an excuse to stay close to said woodstove. I only go outside to swap out frozen water buckets with fresh ones filled with warm water.

I should feel guilty, apparently being the only one in the room experiencing humane temperatures and NOT wishing for spring. Sounds like you've found the perfect way to immobilize PB so his back can heal – the turtle sweater!

We blew away our previous cold temperature record by ten degrees one day and five degrees the following day. Outside of my stint in central Minnesota, I don't think I have ever experienced temperatures as cold as what occurred during Genghis.

I skipped the "that was nice" part and went straight to "it can go now". But it's not leaving, dammit. The water hauling is what makes me rethink my lifestyle. Then I go inside and warm up and forget about it.

Egads. What a time for a near (thankfully) catastrophe! I do hope he is on the mend and I can totally relate to your sleeping attire, seeing as I have no human heater in bed, either.

It's so cold here, Leigh, that if I tried to use warm water, it would freeze solid in less than a half-hour. I stick with cold water and make it as deep as possible so the ducks can poke through the ice for a while. Until it freezes solid.

That is such a good idea! If I wasn't worried that he would twist himself into paralysis, I would have sewn him in that sweater! I'm not ready for spring, but I would like to have our regular winter back.

Only six more days of this crap and then we are - please god - back to normal winter for a while. This stuff is very trying!

Congrats Charade! :)
Susan, I LOVE reading your posts...my Jack does the same turtle thing if I keep his sweater on...it FITS him, but he manages to get his front legs all caught up, poor innocent little fella. :)
Genghis is kicking my butt lately, as is his style of onslaught...no mercy. Great name! :)
Aaaah, that's the secret? Milk marinade to keep the calimari from being rubbery. I didn't know that, maybe I'll be more courageous and try to make some breaded calimari at home now!

I have the same prob with coffee. You are spot on with the 2/3 mark. A heartfelt thanks for the Thermos tip and the laugh at PB's antics. Wishing you a happy, and warmer, New Year.

I hope you and all of your Critters stay warm and survive the storm! Keep us posted!