It never fails - the one day out of the weekend that I have for getting things done on the homestead, will be the day of abysmal weather.  On Saturday - my one day "off" - it rained the entire day.  That's not entirely true.  It threatened rain from when I awoke (4A) to when it actually started and didn't stop (11A).  Within that damp window of time, I was able to let the sheep eat some grass (not a lot!  In spring I suffer from extreme BF - Bloat Fear), did some frantic weeding of the rhubarb, threw a half bushel of shavings into the duck hut, did two loads of laundry, knitted, fed everyone, and swept the kitchen floor.  Then I was out of the door and up to VT to get my main air filter replaced for the umpteenth time (thank you NOT, mice), then over to the farm to put in my trade-time.  While we were planting peppers and eggplants in the greenhouse, it started to rain.


It was raining steadily by the time I got home, but there were things to get done outside, rain or not.  I spent an hour trimming and planting willow whips, hoping to eventually create a living fence across the front of my property.  The trucks and dust create such a hazard, that I had to come up with something.  Ideally, one should create a narrow hole about 8" deep in which to place your whips.  Since my property is about 20% stone (ergo - two gravel pits), I am lucky if I can pound down 6".  I am sure the people on my road think I'm crazy, but that's okay with me.  I got fourteen whips planted and thoroughly watered before I threw in the wet towel and retreated inside.  Let's hope that they take hold.
﻿ As you can tell from the photograph, I was again laden in leafy goodness!  I got five heads of jewel-like lettuce (green and red - on left), two bags of mixed Asian greens, a box of mixed microgreens (delish!), a bag of spinach/kale, a bunch of red mustard greens, a bag of tiny turnips and greens, and a bag of Shiitake mushrooms!


Sunday (a belated Happy Mothers Day to you all, mothers of skinned, furred, feathered, scaled babes) which started with a cozy session with two of my four (counting Layla because she's temporarily my babe). 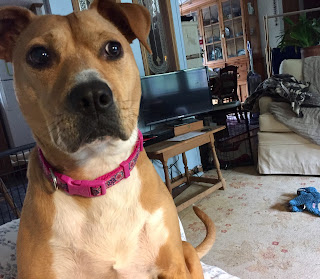 I made a peach/blueberry pie to take up to VT for our MD dinner and it was the first time I had made a fruit pie with frozen fruit. It may also be my last.  I did a lot of research online and followed what was, I was assured, the best method for baking it.  NOT.  It was watery and ruined and a total disappointment.  I even cracked and made non-GF pie crust.  Poo.  (For you skilled bakers **cough**Mama Pea**cough**, I baked it on the lower shelf in a hot oven - 450* - for 20 minutes, then at 350* for 40 minutes.  Actually, almost 50 minutes.)  Any input would be greatly appreciated.


I would also like to point out that Sunday was beautiful.  Because of all the baking (pie and barn crew), I didn't get much time outside.  I let the sheep out on a short foray into the grass, and did a little tidying up on the deck.  Then it was out the door again, to the transfer station, to the garden center to pick up my annual MD hanging basket, Home Depot for a replacement bulb for the halogen light over my sink and then to my sister's for dinner with the bad pie.  Sigh.  Then a quick trip to the grocery store for cat food, then home again.  I arrived home later than I had hoped and I was too pooped to do much more outside.  I have another interrupted weekend next weekend, but I am determined to take a couple of days off before Memorial weekend so that I can make some progress.  I mean, there should be a least ONE day of nice weather all to myself in five days, right?


Early mornings are all about Slimmie and me.  The dogs are not early risers, so Slimmie gets some one-on-one Mom Time.  I do adore him. 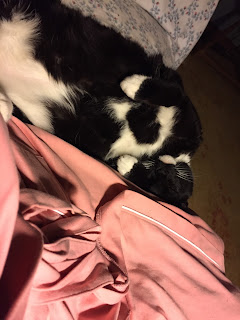 Who would not love Slimmie!!!!

Otherwise, your weekends exhaust me. Just reading about them! :-)))

I long harbored suspicions that after five days of everyone driving around exhausting all kinds of compounds up into the air that those fumes trigger weather somehow. It always seems as if we get the worst of the weather on the weekends... around here anyway.

Isn't he dreamy? He feels like a mink. It's frustrating because I have friends who very successfully bake pies with frozen fruit filling. Pfft. I guess this means I shouldn't eat pie!

Same here. I look at the forecast and it's sun, sun, sun, sun, clouds, rain-hail-wind-locusts for the weekend. I have a sneaking suspicion that, when I finally retire, it will be hellish all week and blissful on the weekends. The Universe is perverse.

God, you must love going back to work because damn your weekends sound like hell! :-) Do you ever find a natural product that worked for flea or tick protection? We seem to be having a very ticky year here.
Happy Mother's Day right back at you!

I get the stone thing, In ancient times our property was a beach, a very rocky beach. Knowing I need to dig a new hole brings on fear and loathing but still I go out and buy fruit bushes and things with root balls. Fur children are wonderful.

I had to go take a nap after reading about your weekend....with my furbaby, who is always ready for cuddles. (and black & white like Simmie). What beautiful greens..yum. Bet your pie was delicious...pretty is overrated.

I don't make pies often because I hate to make crust, but when I use frozen fruit for crisps, I add 1/8-1/4 c flour stirred into the sugar to firm up the filling.

I have a huge crush on Slimmie. But don't tell PT his twin by another mother. On the pie front well I don't too often but when I do it isn't on the low shelf but the middle. What kind of thickner did you use for the fruit? It may have needed more then you thought. And did you defrost the fruit and drain prior to baking or not? Frozen fruit carries a flood of liquid when it defrost. Most likely no help but there you go.As my Mama would say "what do you think it will look like in your stomach?" She did have a way with words. (eye roll)

Love the fencing idea we have a lot of folks out my way who fence with trees or large bushes. Kind of nice.

Oh, sooo jealous of all that beautiful, fresh, nutritious greenery!

The only frozen fruit pies I make are rhubarb and blueberry and raspberry. With the rhubarb and raspberry, I mix up the fillings with the fresh fruit, put in container and freeze. With the blueberry, I just freeze the blueberries and mix with flour (and other ingredients) before putting into crusts. I've given up making crisps or crunches or whatever with rhubarb that has been frozen by itself. ALWAYS turns out way too watery. (This cooking/baking stuff ain't easy!)

If I were the gourmet cook you are with entrees, veggies, etc. I wouldn't worry about baking pies! ;o)

As good as any!

And no matter where you go, just LOOKKKKKK at the lines of cars!

Happy belated fur-mom's day! ;) Oh you're lucky to have all that nice produce! I'm going to be planting some more greens today after I finish with the taters.

I always blind bake my pie crust at 425 for about 10-15 minutes because otherwise I always find they are very soggy. I haven't made a pie in ages, but maybe it was just your recipe? For my fruit pies I usually bake them around 400 for an hour or so and I've been lucky with the results!