If I had rotator cuffs, I'd pat myself on the back.

I never learn.  After effusing about the young fellow who has been replacing my fence, he got everything done except for one last section.  Then he disappeared for three weeks.  He was going to re-hang my hay feeder in the run-in shed so that I could move the sheep and llama down to their "summer" home.  I suppose, technically, it's still summer.  MID summer.  On Sunday, having reached the end of my rope, I stopped at a local hardware store (local to Marianne's farm - there is nothing of use locally to me) and picked up a variety of bits and bobs that I thought I might need to do the job.  As is often the case around here, help is scarce in small stores - unless they know you personally.  So I ended up with 100 1/4" nuts, 30 1/4"x2" #20 screws and 60 flat washers.  I marched up to the checkout guy and plopped the lot on the counter and asked if they all went together.  I am old and no longer care if I appear to be idiotic.  I am practicing for my eccentric years (hahahaha - jokes on me - they're here!)


I then went home with my bounty - vege and hardware -and proceeded to reinstall the hay feeder to a point where I think I can even thwart Linden.  I do have to tweak a few things - like saw off the overage on the crosspieces and switch from regular nuts to locking nuts - but it is solid.  Huzzah! 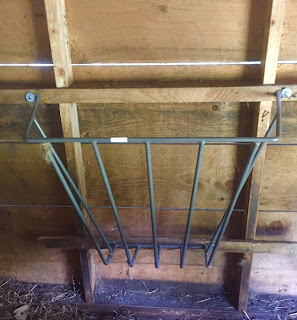 I then weeded for two hours.  Do I know how to have fun?!  Being a little over-zealous with my weekend expectations, I also made some new things:  Aztec Cookies (thank you, Elaine!) and Chai Coconut Ice Cream.  By the time the ice cream was finished, so was I, so I can tell you that it's delicious from the teaspoonful I had just before cramming it in the freezer.  The Aztec cookies are delicious!  I also made, for the first time, Chickpea Zucchini patties.  They were also delicious, but way too fussy for this time of year.


For my two hours of work with Marianne on the farm, I got:  a quart of Shiitake mushrooms, six heirloom tomatoes, yellow onions, German Butterball potatoes, a vase of sunflowers, a bunch of beets, two heads of Romaine, two purple kohlrabi, a bunch of carrots.  And an iced coffee!  When I got home, there were an additional two pints of raspberries from my neighbor.  AND my sister and I made our annual pilgrimage to the blueberry farm, where I filled the coffers with 12 lbs. of blueberries.  It has been a spectacular year for blueberries, apparently.  Those 12 lbs. were picked on one half-row of plants.  I bet I could have gotten all of them off of two plants!


I had just collapsed with the pups, when a 4x4 pulled into the driveway - my fence fixer was back.  It's like washing  your car when you want it to rain, right?  I let him saunter down to the run-in shed and, after a few minutes, he was walking back up towards the fence, shaking his head.  Apparently, I had done exactly what he was going to do!  Double huzzah!  He then proceeded to finish the fence within a whisker of doneness.  By then it was dark (the days are so much shorter) and all that was left was to connect the end of the fence to the barn with fence clips.  I had moved the crew down to their new summer digs, so we left it that he would be back to finish up.  He arrived at 6:30 the next morning and finished.  Finally.
Posted by Susan at 6:30 AM

Would you please ask Marianne if it would be alright with her if I came and worked in her garden(s) for two hours every Saturday morning, too?

P.S. Another reason we are twins from different mothers: I'm lacking both rotator cuffs also. Good thing I can hook my bra in front and then twist it around my body so the hooks are in back and the cups in front. :o\ TMI? Sorry.

Huzzah! Here's to strong fences, good cookies and great ice cream! Pets to Lovey and the Pat and Slimmie too. I'm betting something fun will arrive in your post box sometime soon.

For reasons unknown to me, we still have a small local hardware shop in our community and I can rarely step twenty feet inside without one of their employees asking how they can help me. Unless it is a really specialty thing, they are almost always very knowledgeable. I consider this a national landmark in my life and so every time I run into the owner outside the store, I make sure to let him know what a treasure he owns.

P.S. In my store, they sell individual fasteners that you can just put together in a small paper bag and write the price on the front so you can get exactly what you need and not end up contributing extra to a junk drawer of hardware because you were forced to buy a box of fasteners.

sometimes you just have to take matters into your own hands. I'd think seriously about moving up near Marianne's farm and barge in on your job except it snows up there 9 months out of the year! there is nothing to harvest down here this time of year. we do have blueberry farms, the pick it yourself kind but they are about 2 hours away from me. when I was younger and more heat resistant I would go and pick. you had to get there, 8 AM latest or die of heat stroke.

That's one nice bounty to haul in, and I'm glad you hear you finally go the fencing up.

Sistah! Exactly what I do! The three of us would have a ball - you'd love her!

Squeeee! The Pat got his allergy shot yesterday and he stole the heart of our new teenage girl vet. He peered up at her with his beady eyes and his grumpy lower lip and she was totally smitten. I will be checking my mailbox six times a day! Pets to your merry crew!

A treasure is right! What I wouldn't give for a hardware store like that. They did offer the same individual fasteners at this store, but I cooled my heels for 20 minutes, waiting for someone to help me. I then gave up and went the large, economy route. It's very frustrating.

Yes, there is the snow. However, you can always add more layers if you get cold. Last I heard, it's still illegal to gallivant around in your birthdays suit in Texas (or anywhere else) even if it's the only way to avoid heat stroke.

I count my blessings daily. I am inordinately happy about the fence, even if it has set me back by months.

Can't believe you got all that work done. You seem to go non-stop. I give you alot of credit. Its nice you get all those fresh vegetables in trade for helping your neighbor on her farm. Its been a pretty good blueberry season on Cape Cod too. I'm glad you got your fence fix. Take care !!

A few truths from my life as a goat farmer. Goats and other stock require fencing really good fencing. I prefer cattle panels to no climb as they are portable and easy moved if one doesn't mind working with something that could well out weigh you , has a memory and behaves like cooked spaghetti noodles. I am getting to the point drum roll please!
One can fix any feeder or fencing with well placed screws and washers such has you have used. Those darn washers make a hero out of all!
Good work lady and oh if Mama Pea can't make it to Marianne's one Saturday and you need company would you please call me?
P.S. recipe for Aztec cookies please? PPS and the ice cream? Pretty please with a cherry on the top.

Exasperation is the mother of invention. I too no longer care what any young whippersnapper thinks-yes or no, give me the goods and move it along. I will have to pick not my own this year, my blueberry crop is dismal.

I have gotten my first tomato - Fall, come on down!

Hi, Lynne! I have to really push myself on weekends because that's all I have. The nicest part about working on the farm with Marianne, is the time spent together. I rarely get to spend time with anyone who is simpatico. I bet Cape Cod blueberries are the BEST!

I hear you on the goats : fencing. For the brief time I had Nigerians (thinking - hahahahaha - that, because they were small I could outthink them) they managed to take down, go over/under/through fencing as fast as I put it up. One of my sheep is amazingly goat-like, in that aspect. Thank god he's blimp-like and getting older so he can't get down and shove his girth under the fence. I will email the recipes to you, my dear. I put you on speed dial so I can call from Marianne's little piece of heaven. :) Hope you are okay out there and that the fires are soon totally under control.

Isn't that the truth? I am finding that I have less and less patience with lazy/rude/whatever people anymore. I suppose this is because I am realizing I don't have all the time in the world. I bet this rotten summer had a lot to do with your berry crop. How're the puppies?

Cowgirl neighbor and I managed a fiber night the first in over a month it was just what the Dr ordered. This morning blue skies for the first time in over a week + 👏

I envy your cowgirl neighbor - and YAY for blue skies!!!

As nice as it is to have help, sometimes it's hard having to count on somebody else to get things done. At least he came back!