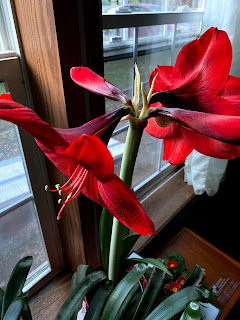 I figure it's one of three things:  gremlins, a secret trapdoor into another dimension OR all of the planets are lined up, giving me the big cosmic raspberry.  Exhibit A:  I spent hours trying to find my third leg (aka Canie).  Hours.  It was outside, leaning against my car door.  I had not been out by my car for two days.  Canie was missing for less than one day.  Exhibit B:  This morning, I made two cuppas with my trusty Nespresso cheater pod - the kind into which you put your own coffee and reuse, a small step in the right direction.  This afternoon, I have only the top half.  The bottom has vanished.  Cue up the spooky music.

I have at least six knitting projects whizzing around in my head, causing so much noise that I haven't lifted a needle for days.  I need to focus.  Sigh.  While trying to locate a certain set of double pointed needles in the craft/office/chaos room, I pulled out a drawer in my stacking organizer to find....my collection of pom poms, a wool kit that must be at least four years old and... about a quarter cup of cat kibble.  Obviously, mice toted each piece up to the second from the top drawer.  Offerings for the Pom Pom Gods?  It boggles.

I've got a nice arrangement of forced forsythia branches/flowers on the table.  The bushes are covered with dust and don't do well on their own.  I'm hoping that the stems will root and I can transplant them between the willow hybrids.  The dust is horrid.  The town finally came by with the sweeper - after it rained, of course, so that they only removed a fraction of the dust that coats the road.  They're nothing if not incompetent.

I had put on my 101 Greatest Motown Hits cds and Lovey and I realized we do not shake our booties like we used to - my swivel is lopsided and she has a bum knee.  But we do our best.  Peanut covers his head. 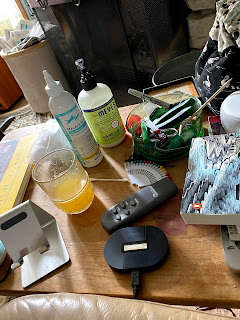 The Nerve Center now sports ear drops and cotton wads.  Peanut is suffering from his usual seasonal allergies.  This involves two wrestling matches a day.  At least I am getting some exercise.  He gets his monthly allergy shot on Saturday, bless him.
I had to move the bluebird house, due to the collapse of the tree section that was its base.  This, apparently, has not met with the approval of Mrs. BB.  I hear Mr. BB doing his trilling best, trying to convince her that it's a good place to raise a brood.  She better decide soon - the wrens are due any moment and they have found the BB house to be hunky dory the past two years.  I've noticed that we have a plethora of red breasted nuthatches.  I find them entrancing - they are tiny and fast.
Tomorrow is my second vaccination shot - I will be happy to have that under my belt.  I have a sizable list for the local big box store involving potting soil, grass seed and possibly some dahlias.  I'm trying to decide if I should go before or after the shot.  I'm not afraid of dropping over with side effects, but the first shot made my arm pretty sore and I have to trundle sacks around.  Of course, I could just push my cart to the car and stand there, leaning heavily on Canie, looking helpless.  It would be my luck that everyone in the parking lot that day was over 80.
Yesterday, I spent a couple of hours with Marianne, as she baby-sits her granddaughter on Mondays.  We figured that we'd have more of a chance to talk - once she gets to the store, she's lucky to have five minutes to spare.  Lucy and I hit it off after a bit - she is a vision of Pre-Raphaelite beauty at almost two.  When I left, she was standing at the window, looking very sad and giving me a little queen's wave.  I almost turned back.  I had taken her a prototype of a new stuffie (you can't hold me down!) which she seemed to like.
The leaves are starting to be visible and, while the nights can be pretty cool, the days are mild.  I have one rain barrel set up - the one near the chicken yard, huzzah!  How nice to not have to schlep water from the far end of the house every morning.
I have started the spring clean up, which translates into making a variety of little piles.  I need to divide my Japanese irises and dig up and move a lot of the day lilies.  I started a tray of shishito peppers and will plant arugula and salad greens in the cold frame this weekend.  My favorite organic farm has started to offer a limited variety of spring produce on Saturdays, so I am heading up for scallions, kale, Swiss chard, mesclun mix, and spinach.  On a side-rant - the way they set it up is to have you order online, then you pay when you pick up.  Apparently, they got royally stiffed at the last pick up.  We now have to put payment in an envelope with our name on it.  Really?  This husband/wife team has slaved away for 37 years on this farm to grow wonderful organic produce for us and people think it's fine to not pay them?  I am so steamed.
The shearer has not called with a date yet - I hope it's next week, as this is turning out to be a busy week.  I will try to be more diligent about getting posts up, but I am not always trustworthy.  I am now off to see what has been going on in your exciting young lives!

i hope you don't get sick after the shot. it usually doesn't start until the next day. if you do, remember it really only lasts a day. i had most of my windows sealed shut years ago because of the city dirt. no one tells you about this, you have to find this secret out for yourself. cities produce a dusty grit to match no other!

You sure do get a lot done with only one leg and a cane! Loved this post and am happy to see you're getting out to see people a bit. Me, too. I refuse to let this pandemic make depressed zombies out of us. People need people, kindness needs to be given and received.

I have two canes, one for the house and one for wherever I drive the car. Fortunately I can get from the house to the car without a cane, but only because I have something to hold onto.

So glad to see a post from you. I miss you!

I can attest to the fact that two year olds are quite smitten with your stuffies. Orange Pants and No Pants now sleep on a big girl's bed.

The lid to your pod? Might I suggest looking out by your car approximately where you found your third leg?

Congratulations on your second shot. We get ours on May 2nd.

I am picturing a whole troop of mice moving your cane out to the car and then tee-heeing into their tiny mouse paws. I envy your vaccine and I hope it all goes well. -Jenn

I have a number of unexplained occurrences here as well! They never cease to baffle.

Sounds like you are not only busy but productive! Spring is a truly motivating season.

I expect when I die, somewhere up beyond the pearly gates is a room full of all those things that mysteriously disappeared along with rational explanations. God wouldn't leave me hanging.

I had my second shot of Pfizer on Monday. It was much much better than the first one. My arm hurt that evening but only very minor compared to the three days of pain the first one gave me. I also didn't get any flu like symptoms other than the urge to take a nap that afternoon after the shot. But that latter might have happened regardless.

perhaps you've been sleepwalking. my sister does that. she also sleep calls people. or maybe it's a poltergeist with a weird sense of humor. I love forsythia and wish it did well down here...doesn't really get cold enough and the heat in the summer is horrible.

Using a cane has obviously not slowed you down! I blame unusual noises and missing things on the 'Ghost'.

Well, your amaryllis are looking good, at least! That's VERY strange about your cane. Poltergeists!

I bet those mice are bummed that you found their food stash.

Well Queenie around here if it doesn’t bark or meow I’m a cheater and goat noises or a crow like a rooster chatter like a hand taking off and we missing for days months and years. I’ve given up trying to figure out when where and why I just know eventually it will turn up and I’ll have it again.

Spring is sprung I have two that quite as gracefully. Lots going on do understand your lack of communication so thoroughly although I feel the stars aligning and who knows if all goes well after dinner tonight there might be a new blog or on the block again. Optimism is essential and night is the optional word.