Making the most of it.

This past weekend was a weekend full of list-checking-off activities.  Just to keep it interesting, I am juggling three lists and I managed to tick off an impressive amount of things from all three!  Plus some that were more "essence of list".  Like the fact that my 80-something year old neighbor told me that he had, on his daily walks - not once, not twice but - THREE TIMES removed Chickie's head from entrapment in the gate between the sheep/goat areas.  Apparently, Chickie is big-time hot-to trot to get into the sheep area.  I put an extra clip on the gate and that has done the job.  Or so I hope.

I got feed (ouch), then dog/cat supplies (OUCH), checked on my parents, gave my mom a haircut, got gas, got a couple of things from Home Depot for my arsenal in the Great Ratz War, dropped off a book for M (spreading the Salatin word), and made it home in time to bake some GF brownies for the dairy barn, do chores, clip my peonies, cut down the strawberries, visit with my neighbors, and move three loads of firewood onto the deck.  I also took straw over to a friend's and shared a glass of wine and some much-appreciated adult female conversation.  Then I finished my waaaaaay belated Pay It Forward gifties, and toddled off to bed.  I was going to paint the run-in, but it was still pretty wet from the non-stop Gray Condition of the past two weeks.

Sunday brought much cooler temps, but the sun did finally come out - mostly - and the breeze helped to further dry things off.  I got three loads of laundry on the line, and then I tackled the run-in.  I have to tell you that it is very, very, very difficult to get things done when the sheep are hell-bent on "helping" you.  Usually, I send them off to the grassy part, but the last time I did that, Flora over-did it and I almost lost her.  She does not know the meaning of the word "stop" when it comes to grass, and it's too hard on her old ticker.  I did finally manage to bore them to tears and they left me alone when there was nothing food-like in the offering. 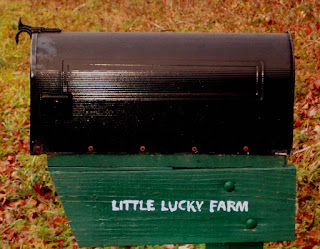 Yes, I know it's off-level.  I could lie to you and say I meant to paint it that way.  But I won't.  It's hard to be kneeling on rocks and concentrate on leveling things at the same time.  However, I already came up with a way to make it look "cool", like I meant it to be slightly off level, and will work on that this coming weekend.    With knee pads.
Posted by Susan at 8:15 PM

That's it. I need to make a list! lol

I love making lists, they help me to remember to get certain tasks done. It's tough getting older, lol....
Great job by the way!

Man, how LONG are your lists???
Love the mailbox :)

Cute mailbox, and I live by lists...

I make lists and then forget where I put them, maybe there is a reason for that, reading all you crossed off your list made me tired, LOL. Congratulations for all you did get crossed off.

Work lists are always endlessly long--if not a bit satisfying to check things off.
My "fun" list is much shorter---Ice Cream!
Ha! Just kidding. Harass spouse is on that one too. I don't consider that a chore-LOL!

Sandy - Isn't that the truth? I don't remember anything now without a list!

CR - You don't want to know. My list(s) are actually on a little spiral notepad. I love my mailbox, too! I was going for the not-quite-hick look.

TL - That's where post-it notes come in handy - there are some days when the inside of my front door is peppered with them! Not to say that I don't manage to walk out without noticing them, though....

I was wondering this morning, when you go out to feed the chickens do you say 'here chickie chickie"? like I do? And if so, does Chickie get confused and come over to see why you are calling him? How do you address the fowl? See what silly things I wonder about ;)

Jane - I go out saying, "Good morning, girlies!" Then "Good morning, pearlies!" Then they ignore me and race towards whatever I have thrown down for them. Chickie comes when I call the sheep, the llama, the dogs, the poultry. Sage only comes when she sees that I have goat treats. So, what do you call your Guineas?

If I didn't make lists, I think I would just run around like a .... well you know.

Chickies of course! and sometimes Chick peas. And sometimes things that begin with b's, and s's, rarely f's depending on whose neighbors yard I have to retrieve them from.

I love your mailbox, I would have thought you did it that way on purpose! :)
I had to laugh at what Jane calls her poultry!!