Apple Lovers and Using Up Stores.

A neighbor has been giving me bucketfuls of small apple falls from her trees.  I pick through the buckets and save the larger ones for saucing, while the smaller, gnarlier ones go to the outdoor dependents.  Pria, who avoided me like the human plague, now practically runs me over when she sees me.  While I like to think it's because she has come to know and love me, it's all due to apples.  She is crazy about apples.  I used to just toss a few handfuls into their paddock, but she is about 90% blind, so that doesn't work well - because Linden is crazier about apples and is very fast on his hooves for a portly type.  So I am left with hand-feeding (and checking to see if any fingers are missing) Pria.  Norman was bewildered by apples.  I smooshed them, I cut them in pieces.  I even would bite them in half for him.  (TMI?)  I finally found the perfect combination of smooshy, but not too brown and flattened enough that he can get his little mouth around them.  I wish I had taken a picture of his face when he first actually ate one.  His eyes got wide and he looked at me like, OMG!  So THIS is what it's all about?  Norman is, however, the craziest of all about graham crackers - and I have to be feeling plenty brave before I go out and offer him any.

The goats are sort of so-so about apples and I really have to smoosh them up good before they will deign to try them.  I am always amazed that their mouths are so small - especially with all the NOISE that comes out of them...

I managed to get a lot done over the weekend, though - as always - not as much as I had hoped.  I was battling a head cold since early last week, and Saturday it sort of got the better of me.  So I did a few things outside, with lots of tea-drinking and knitting in between.  I also managed to can 8 pints and 4 quarts of homemade beef chili.  I had to make it fairly mild, as some of it goes to my parents, but I can doctor it up when I fix my own.  Applesauce and apple mincemeat were also on the to-do list, and the applesauce got done, but the apple mincemeat didn't hit the top of the stove until early this morning.  I'm thinking of lacing half of the kettle-ful with something alcoholic (what IS it with me and the boozy stuff this fall?  Is it - like stripes on a caterpillar - a sign of a hard winter?)  There is something wonderful about making a mess o' mincemeat tarts in the middle of winter.  Mmmmmm!

During my latest processing frenzy, I became aware that I was running very low on pint jars.  Why?  Because I have stockpiled way too many canned goods and I am not using them as quickly and as often as I should.  This caused a stockpile inventory which showed a huge amount of pickles.  From as long as 7 years ago.  Not only am I not a big pickle eater, I am a picky pickle eater.  I love my neighbor's pickles and I love Sylvia's mother's recipe.  So I have about 10 pints of pickles that I have no intention of ever eating.  Time for a purge!  I also discovered 10 pints of forgotten canned sweet corn.  Time to go into action.  And, thanks to a timely post by Mama Pea (my hero) via Jane's wonderful cookbook, I made some corn fritters (GF) that were wonderful.  I teamed them with homemade applesauce (2012) and homemade Greek-style yogurt.  It made me realize that I need to use up what I have - so I am going to make at least two meals a week with what's on my canning shelves.  Let's see how creative I get! 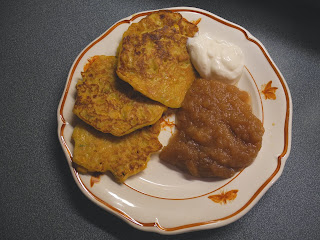 I learned ages ago that , much as I'd love to LOVE certain canned goods, we just don't eat that way and so I am the only person I know that doesn't can salsa and pickles (or ANYTHING pickled for that matter). I like plain food. And corn fritters. Yum!

Now I know I am not the only one that caters to get an animal friend to eat. Smooched an brown....love it.

It is kinda a waste to fill jars with beautiful pickles if you don't like pickles. I made plum jam years ago, way to many cause I don't care for plum jam, but there were lots of plums and they were free. Fortunately my kids were young at the time and with lots of peanut butter I managed to get rid of a lot of plum jam, but I think it took 2 years.

In my next life, I'm coming back as one of your animals. Love the second picture and caption.

Mmmm, applesauce with those corn fritters of Jane's . . . sounds good to me.

Why would anyone go to the trouble of canning something they don't eat? Don't answer that. I can testify that it's a sickness. I once canned some potatoes because I had run out of other things to can. (Not that we didn't eat the potatoes, but looking back on it now, I think it was dumb.)

P.S. No, no, no, don't label me a "hero." Makes me feel like I hafta keep my hair washed and legs shaved to be good enough.

Glad YOUR animals eat the apples. My picky diva goats will only eat one or two, and goodness forbid that they are ones that I've taken a bite out of. If there is ANY foreign stubstance on a treat, they turn their noses up.

I think I'll take your advice and start purging my pantry.....three (or was it four) years ago I made a crapload of pickles.....pickles that didn't taste that great to begin with, but in a "I've just GOT to use these stupid cucumbers before they go bad" moment, I decided to can pickles. Lots & lots of pickles.

Wonder if the goats will eat pickles?

I don't can much, but I do know what you're talking about. Pickles are so easy to make but I just don't eat many of them. These days the only thing I make is strawberry jam for the DH. He'd just about have a stroke if he thought he had to eat jam from the store!

I make good pickles so I do eat mine. I made enough last summer that I didn't can any this summer. Sometime you never know what you'll actually eat! I love corn goodies!