Slap on the Pontoons, Honey! The Creek's Rising!

I checked my egg diary (yes, I have one and have kept it religiously for 11 years) and it has rained for almost 14 days straight.  This is not conducive to gardening.  Or about anything else except duck-watching.  Even the ducks seem tired of it.  All that greyness has ratcheted my energy level to 1.


Last Thursday I reached the end of my tether and went straight out after work and cleaned out the small coop.  I ran the power out and set up a nice fluffy layer of shavings.  At 5:30 the next morning, I was hooking up the light, putting out water and food, and trotting the Nuggets out in the cat carrier.  I then trotted back in, had a nice latte and wallowed in the chick-less-ness of my laundry room.


Saturday was supposed to rain all day, but we were in luck and it didn't start until 3:15.  I gave myself a pep talk, had three large lattes, and threw myself into action!  That break from the downpours let me run to the food pantry, pick up feed, go to the post office and library, and make it back to tackle the raised beds.  I got five beds rough-hoed, three of those ready for planting, put the hoops up over my (please god) pepper and eggplant bed, adjusted the framework over the blueberry and currant bushes, and made it in before it poured.  And boy, did it!  I think we must have gotten well over 5 inches of rain since mid-April.  It's crazy.  And cold.  I also muscled my Meyers Lemon tree out onto the deck (where the pergola has not been built, sigh), with fervent apologies.  It is not supposed to drop to frost levels, but it did get down to 38*.  I'm keeping a close eye on it.  I need to get the giant fig tree out, but that is a two-person job.  Maybe three.  Everything deck-wise is hinging on the building of the pergola.  But, until we get some dry weather, that's not happening.


I baked a new variety of cookie for the Barn Guys - Mexican Chocolate Crinkles.  I can't tell you if they were tasty, as this was not a GF recipe, but they were fighting over the last one, so I take that as a good sign.  It may have been the stick-and-a-half of butter....  Mine did not have a nice, white, powdery sugar surface, but they seemed very moist and chewy.  A keeper.  I also baked a strawberry rhubarb crisp for Mother's Day Dinner on Sunday.  It was a new recipe and, while I did like the topping, the fruit was very liquid-y.  The person who wrote the recipe that I 'based' my crisp on was very adamant about not adding cornstarch or any other filler.  She must have 'special, precious' fruit.  LOL.  It tasted fine, though, and my sister made an amazing dinner of sautéed shrimp and mushrooms with cheesy grits.  OMG.  Everyone was moaning around the table!
This falls under the category of DUH.  For quite some time, I have had a lot of trouble with my lower back, hips, knees - you name it.  I wrote it off to age and abuse.  However, the weekend my sisters were over, as I was putting fresh sheets on my bed, I noticed that my mattress had a definite swayback look to it.  I then stood and tried to figure out how old it was.  Good lawd.  It has to be close to 30 years old.  As an experiment, I have been sleeping in the guest room - on the new mattress (less than 10 years old).  The first morning I woke up, tentatively put feet on the ground and...it was a miracle!  Yesterday, I took a deep, shaky breath and bought a new mattress.  What the heck are they stuffing these things with?  Fifty-dollar bills?  Geezlouise.  I tried to convince myself that it was an important investment in my overall health.  But, what I gain in physical health I may lose in emotional trauma.   It arrives in all its glory on Saturday.  It will be nice to be back in my own room - The Pepperoni is so confused. 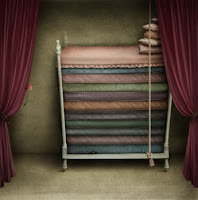 I don't have an egg diary but I've kept a regular journal for over 20 years. My father has kept one for 30 years after my grandfather died and my grandfather kept one for nearly 50 years before that. They are a superb resource for weather and other things.

Where have you been all my life? You make me laugh. If you're ever passing through the Pacific Northwest, let me know. I can instruct you on the finer points of life in the rain. Real rain. All the time.

Having a diary or journal on your eggs over the years is a very wise thing to do. This way you can identify changes in eggs, chickens, time frame, weather or anything. I do the same thing with my garden beds, and the seeds/seedlings I plant.

When your back and hips hurt and there's no medical issues it's time to really look at your bed. The best thing is to do exactly what you've done, sleep on another bed and see how you feel. You felt so much better when sleeping in your spare bed. Hurry up Saturday, you need the new bed to sleep better and to feel no more pain.

The rain has been to much, it would be so much better if the rain came every couple of days and not all at once.

Hang in there, and enjoy your new bed.
Hugs,
Sandy

OMG there's nothing worse than a swaybacked bed -- so glad you bought a new one! Yes, they're expensive but worth it!

And another OMG! Rhubarb always needs a cornstarch slurry to thicken the juices! It is not just "filler" -- it is crucial!

It's interesting that you wrote about getting a new mattress / back and hip pain. I've been looking into the same. They are crazy expensive. I'm not sure if mattresses are a "you get what you pay for" thing or not. If we do decide to invest, we will wait for a sale. Let us know if it makes a difference. -Jenn

Ed, that must be a fascinating read - my egg diary is a very basic record - date, morning temperature, number of eggs, weather and an occasional important event. But it is so interesting to go back and see what the weather was like, 2 or more years ago.

Jane, where I've been would entirely depend on how old you are.. :) You PNers have living with rain down to a science! I've only been in the area once and my memory is of green lushness like I've never seen anywhere else.

Sandy, that diary is the only thing I've kept up with on a regular basis. I guess because it doesn't take much focus. Too bad we're not in charge of the weather, right? Hugs to you, too, girl!

OMG is right! I am all for trying something new - once. Give me my thick rhubarb sauce over 'natural' juice any day!

Jenn, I can tell you that sleeping just one night on a better mattress made a HUGE difference! I felt like Goldilocks in the mattress store - one was too soft, one was too hard, and finally, one was just right.

your mom is so cute! you are very lucky to still have her. mine died when i was a little girl. i hardly remember her. mother's day is still a sad day for me.

Your mother is beautiful. I just did a runny rhubarb crisp and I swear there was no mention of cornstarch in the recipe. Last Thursday the forecast was for rain-in reality torrential rain until late afternoon, hail, regular rain, sunshine, heavy hail, sun, thunder, regular rain, full blown thunder and lightning. What are we going to do!

I am so sorry. That must have been so hard for you. I will have to say that you are a wonderful mother, IMHO.

OMG, you just went through the entire four seasons of weather on one day!

You are truly blessed to have your mom around. She looks fabulous. As for the mattress, they say a new one every ten years. My hubby has a bad back, so we have to break down and get one every ten years. we also flip the one we have every month or two so it gets even wear. Man, shrimp and grits sound awfully good.

We bought a new bed a few years ago, what a difference! Raining here now, but 70s this weekend!😁

Your Mom looks great. I get the foam mattresses on Amazon. Inexpensive and very comfortable.

All our best to your dear Mother...your posts are always a joy to read

Waving from the "green lushness" of our record wet winter! Hmm, my egg diary only records the number of eggs I collected each day. And YES; your mom looks great!

Wow, you beat me...I had my old mattress for 23 years and it could literally bend in half...no wonder I ached. I'm AM the Princess and the Pea lol...the cookies look yummy!!! Congrats on all the work you did outside. I am in the same rhythm lately, watching the forecast and trying to do as much as possible before the rain starts. Beautiful photo of mom! :)

You've been having some whiplash weather out there! I hope spring/summer comes to stay.

Sylvie! Doesn't she? This was right after her one glass of Johnny Walker Black Label. With LOTS of ice. I am trying to shop locally, even if it bankrupts me. Kidding, but I am afraid that the entire country will start to order everything from Amazon and, soon, they will outdo Wal-Mart. If they haven't already.

Thank you, Fiona! All my best (and hugs) to you and Ralph. And LLFP and her brood!

Heavens! I didn't try to bend mine in half, but it would have been interesting. I am going to be so glad when the garden is in and going. Then the weeding begins!