Apparently, I will be dining on a casserole of Humble Pie this weekend.  After going on and on (and on) about how wonderful the Jersey cow is, as compared to the Holstein and Ayrshire, I catch sight of this when I went to feed the barn cats this week.

﻿﻿﻿
The problem with these pictures is that milking starts around 7:00 AM and these were taken at 8.  Which means all the other cows - those Holsteins and Ayrshires - are standing nicely in their stanchions being milked.  I was on the farmhouse porch, tsk-tsking in Jasmine's direction.  She, in cow-like stoicism, ignored me.  And walked even slower.  Apparently, they are ALWAYS the last to come in - and sometimes they don't bother, if there is a nice patch of grass or apple falls that have caught their fancy.  It's a good thing both are good milkers.


I tried to get pictures of the two semi-feral cats that I have been feeding now for over a year, but they are too twitchy.  For quite a while it was Grace, a little grey tabby female with a high, tiny voice.  We've gotten to the point that I can lightly pat her head.  For a nanosecond.  About three or four months ago, a male cat, handsome in a beat-up kind of way, so I have named him Bogey, started appearing at breakfast.  He must have been someone's cat at some point in his life.  I can actually stroke his head and back for a minute or two, evoking loud purrs.  But Grace is in charge -  there is no doubt about that.  I am pretty sure that both have been spayed/neutered because there have been other male cats that have come and gone, and Grace has not presented me with kittens.


A pair of barn swallows have built a muddy nest atop wind chimes that are hanging from the porch.  My morning visits are now dive-bombed by agitated parents.  Can't wait until those birdlets fledge!


I have been turning to reading before bed, to try to calm my mind.  I didn't want to delve into anything in my usual genre - murder mysteries - for obvious reasons.  So I have taken to reading about food and cooking.  The first book I read is called "Home Cooking" by Laurie Colwin.  It's a used paperback that I picked up at my favorite book source - Thriftbooks.  What a great read!  She has a delightful sense of humor and each chapter is short - like a mouthful!  I would highly recommend this book if you can find a copy.  I have now delved into something a little (lot) less light, entitled "The Potlikker Papers; a Food History of the Modern South" by John Edge.  I got this through the library.  It is a fascinating account of how food played a major role in the evolution of the South.  I've just started it, but am enjoying it immensely. 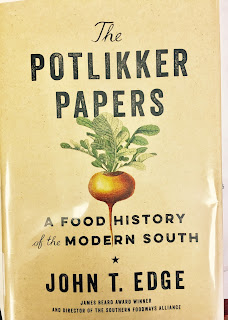 I love cows. Ayrshires are very pretty but of course nothing beats the creamy milk of a Jersey. I have a theory that swallows only nest where good people live.

"handsome in a beat-up kind of way, so I have named him Bogey" -- PERFECT!

I know! When the first 'gentleman' appeared on the scene, I would run all kinds of scenarios on trapping, spaying, releasing - I think that Grace was a barn rescue - spayed, then released at the farm as a barn cat.

Ayrshires are pretty but nuts. Jerseys are beautiful, give creamy, wonderful milk by the bucketful and are stubborn. I will agree - the dairy farmer's father, who lived all his life at the farm, was a very good person. I have inherited the windchimes and may leave the nest intact - with the hope that they follow me... :)

Yes, he's a man-cat's man-cat. But a real marshmallow underneath the scars and lumps.

I don't know what breed of cows all our neighbor Amish milk but I do know that if the doors to the milking parlor aren't open promptly at milking time, all hell breaks loose and I can hear those cows bellering from a half mile away!

Well, Jersey's are certainly the prettiest cow around. I grew up spending a lot of time on my uncle's Holstein dairy farm and I'm most familiar with them - obedient, predictable, good milkers. We get swallows building in our carport from time to time. They dive bomb our cat. -Jenn

Susan, if you have not yet read Barbara Kingsolver's "Animal, Vegetable, Miracle", do so. I think she's one of today's best writers, and this book chronicled her family's efforts to spend a year eating only local. Sounds dry, but it isn't. They'd moved to Virginia, build a garden, got poultry, did a lot of learning. I suspect you will recognize some of the obstacles they faced, but ultimately it's simply a good read, with a lot of beauty and soul-warming humor. I have similar nighttime issues as you, and a gentle, upbeat read is my best solution. Well, and Ambien...

That book looks interesting. I'll have to see if I can get it at our library. One of our barn cats killed a barn swallow, and tore it up and left it on the step. Could have been Leo, the new guy, or our rabbit eating cat. I saw them dive bombing Leo the other day, ha ha! I need to raise a cow one of these years.