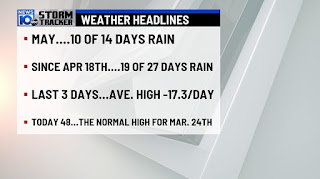 I do believe the Universe has its Ms confused.  You know, like March instead of May.  Another spiffy little statistic is that tomorrow marks the EIGHTEENTH straight Friday with rain.  I may put pontoons on my raised beds.


Speaking of which, I was able to chip away at one of the more problematic raised beds - not the most problematic, but let's not split hairs, shall we? - and I now have two almost-prepared beds out of eight.
We take what small victories we can.  The chickens were thrilled to get the thinnings - four and a half five-gallon bucketfuls!  This particular bed used to be the strawberry bed, but a couple of years ago, during yet another lousy gardening season (I'm beginning to see a terrifying trend), the chipmunks and weeds beat me to any fruit and I threw in the gardening gloves.  I took out the remaining strawberry plants and tucked them in a bucket and sent a message to my new gardening buddy - she's a young mother who is trying to introduce healthy foods into the school system.  She has a big garden at home and has taken over an unused patch at the Middle/High school, where she is a cook, so I have been giving her all of my extra plants.  As a plus, she always shows up when she says she will.  I am all for promoting healthy eating, growing your own and shopping locally.  Especially when that shopping is free!


Tomorrow, I have taken the day off.  When I scheduled this day off, the forecast was for a mostly clear day.  It is now a mostly rainy day.  Give me strength....if it is not a total washout, I will be out there in the drizzle.  Things must get done, no matter what the weather.  The poor sheep have been looking longingly (and loudly) at the grass outside the fence and I found, drat and damn, that my energizer is kaput.  This puts a crimp in my moveable electric netting plans.  I did manage to dig out my battery-powered charger that still had some juice in it.  That gave them an hour of bliss on the grassy slope, poor babes.  I believe a solar energizer is in my very near future.  I can't complain, as I have gotten almost 10 years out of this energizer, including having to rewire it myself after the sheep pulled the cord out.  How fortuitous that I have in my possession a birthday gift certificate for the fencing company.... (xoxox)


After suffering a brain freeze looking at my list, I decided to break it down into areas, then prioritize each area, then set aside blocks of time, etc.  This is becoming more like a military maneuver every year.  Where are my troops?  Where are my minions?  They are inside being naughty, thanks for asking.


Saturday is supposed to be a dry day.  Oh, right.  If it is, I am bringing in my sister and niece and we are tackling the chicken coop.  Bless their hearts, although my niece has never experienced anything farm, so this should be interesting.  I will have a Plan B for her, just in case.  And it will not include The Pat.  I have other plans for them - on the deck with marrow bones.


I have a confusing housing situation with purple martins and blue birds and I am darned if I can figure it out.  Apparently, my lopped off birch stump (about 7 feet tall) has become a hot property.  I thought the martins had set up housekeeping in a hollowed-out area near the top.  I had mounted a blue bird house on the other side - before the hollowing-out process.  Now there is a lot of noise and comings and goings, ins and outs, between house and hole.  The wren even got involved!  I hope they can sort it out and babies, both blue and purple, are fledged.


Saturday is the debut of the Baby Blues, and I am hopeful that we can generate just enough demand to meet production.  I am not adding quail.  Nope.  No way, no how.  (Will some responsible adult step up to keep me in line?)


I will hope to dazzle you with pictures of my tidy raised beds, newly framed and ready for planting on Monday.  Hope springs eternal, much like the rain, so we're in a dead heat.  If that fails, it's on to Plan Z.

Your weather is months behind, ours was months ahead. Now, at least, we are having more seasonal weather . . . well, the wet, cool side of seasonal – but I'll take it, since our hay guy already got in his first cutting, and this moisture will be GREAT for the next cutting!

Consider yourself slapped in the quail temptation department.

I like you am battling the elements. Spent almost two hours attempting to tarp 40 bales of alfalfa in a 25 mph wind with gust up to 40 mph. All creatures were hiding out with ears covered with paws and hooves as the air around me turned a dark shade of blue as I let my frustration vocabulary loose.

And we had rain with more to come over the course of a week. Thanks for sharing 🤣

Our poor farmers aren't able to get into their fields! It is all mud. I don't want to zoom into summer, but I sure am tired of this cold dampness.

Okay - upon your fragile shoulders lies the burden of keeping me in line...

I had to laugh at your blue air - my dogs go running for cover, too! But, sometimes that vocabulary is just what you need to get the job done.

Hi Susan :) Oh the rain...please....stop.....same crap here. But unlike you, I don't have it in me to get out in the drizzle to do much of anything. I follow Jack's lead...in and out, do my business quick and hide under the blankets, the quicker the better...actually Saturday here is supposed to be nice and dry too, but it's also our Victoria Day weekend, so the tourists and weekenders will be here with their quads, loud stereos and their "Irish" whispers hee hee...I'm part Irish so I can say that. ;)

We are also having lots of rain here in the mid-Atlantic states. Our problems also including flooding - and in some unlucky areas when the conditions are right - flash flooding - scary stuff.

I feel your pain. I am trying to paint the exterior of my house and have got exactly 2 actual days in the last 25 or so days. Assuming it will take me at least 20 actual days to finish, that means it will take another 400 days or so at this rate.

Temp here has dropped 20 degrees and raining, pollen is awful so I'm hoping it pours!

Have a great day.

I don't know whether to say Good Luck or order you to Get To It. The amount of work on your plate staggers me; I am silently wishing your niece to be a good chicken woman.

Oh my gosh! Bless you my child. I don't recall anyone ever putting me and the word fragile in the same sentence. You made my night!

I haven't tackled my coop yet either. And this weekend is more rain/storms. I'm afraid my lawn will be knee-high before I can mow.

I'm so sick of the rain this year. I can't do a thing, let alone build the raised bed I should have built last year. Oye. I hope it dries up for the both of us.