Instead of waxing all philosophical on you, I thought I would bring you up to date on some causes for small celebrations here on the homestead. First, and foremost, the turkeys were sent to freezer camp/processed/shown the door and are now residing - quietly, thank god - in MY freezer. They were both about 7 months old and their processed weight combined is well over 30 pounds! That should be enough for our usual Thanksgiving family dinner for four.
Next, Violet was freed from accidental captivity under the shed and is now back with her mates. I don't know why I always have this rosy picture of siblings reunited with my poultry. It never, ever works out that way. It is more like - OHO, who are you? An alien chicken - let's get her! And they give her the once over at ever opportunity until she is convinced that she's at the bottom and lower than dirt. Then they get over it.

I included a couple of pictures of the sheep after they were shorn. It dawned on me that it would have been a better idea to show a before and after, but that will have to wait until I wade through all my unorganized photographs. The sheep at the feeder are (l-r) Flora, her lambs Freyda and Juno, and Coco(nut). The close-up is of Coco(nut), my moorit ewe. She is very skittish, but I have been working with her and she no longer races off as soon as I look at her. I had sold her lambs last year and won't do that again. Without at least one lamb, she was shunned for weeks by Flora and her lambs. She ended up bonding with Hoosier who was nice about it. 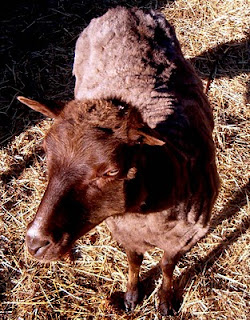 You can see on Coco's close-up that there's a nice layer of wool left from the blade shearing. This, to my untrained mind, is a whole lot better when there's nights that drop to 20 degrees still in the forecast. They also didn't seem as stressed after shearing this year. I'm hoping that they stay reasonably clean over the summer so that I can get some quality fleeces in October. That's hard to accomplish when you have to feed hay all year, but...hope springs eternal!