We were lucky enough to have a great weekend - weather-wise.  The garden is getting planted, headway is being made on my list(s).  Sunday was a marathon of weeding, wheelbarrowing, shoveling, planting, feeding.  I made some mozzarella, three quarts of yogurt, chopped and froze some rhubarb, made some rhubarb/strawberry sauce, discovered GF breakfast (heaven!), washed windows, and lugged Lemmy (my lemon tree) outside to her summer digs.  I could almost hear her sigh with relief.

I also got the electric fencing out and set up a grazing area for the sheep and llama.  Heads went down, and they mowed their way back and forth.  Apria was so thrilled she just ran back and forth for a while.  It was a perfect day for grazing. 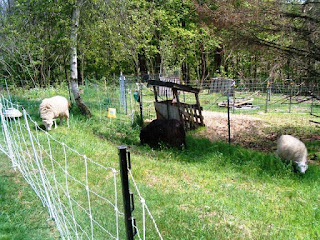 Even the Fricassees got in on the action.  I realized (in one of those head-banging moments) that I had not made arrangements for their move from brooder to grass.  I have my tacky chicken tractor - which needs a lot of work - but I had somehow forgotten that the 'old' meaty house, aka the Lattice Building, had been disassembled and reassembled as part of the run-in shed.  Oy.  So, for the time being, they will be frolicking in the little coop's yard.  I always get a kick out of their first foray into the great Out-There.  The first one out is usually by accident, as they all cram into the doorway and someone gets pushed.  Then it's just a matter of time.  They are enjoying running, flapping their little wings, and defending their turf from the red wing blackbirds.  Of course, I now have to add chick round-up to my nightly chores, as they do take time getting the hang of the in/out process.  Thank goodness for my trusty butterfly net.  Last night, however, I missed one.  I was inside relishing the fact that I could put my feet up for five minutes, when I heard a frantic peeping.  I looked out and, sure enough, there was a lone chick standing on the ramp in front of the closed door.  Five minutes later, she was tucked inside and I was back inside, feet up, ignoring my ironing board.


Since Sunday, we have had rain.  And more rain.  And it's still raining.  Although I thoroughly appreciate the process of me planting and Mother Nature watering what I plant (she is so much better at it than I am), there is that fine line of too much rain.  The forecast sounds better for tomorrow - warmer, too.  That will be good news for people and plants alike.

Breakfast looks great and the sheep look to be enjoying theirs too! I hope you get a break from all that rain, you could always send some down here! :)

I can't believe how much you get done and still have time for that awesome home cooking!

Those pancakes do look good. I wondered if rice flower would make them fall apart, but they look wonderful.

I'd appreciate you sending some of that rain our way. We are so dry now that the rain that falls evaporates before it reaches the ground. Crazy weather makes for a crazy gal hauling hoses around.....NOT GOOOD!

Can you post your recipe for the Brown Rice Pancakes? Sounds good!

My only gripe about Mother Nature doing the watering is that she's not consistent enough with the sharing of it - too much here, not enough there kind of sharing.

I so admire the way you find time to cook good meals for yourself. I've often said if I were living alone and didn't feel responsible for preparing nutritious meals for my dear hubby, I'd probably live on potato chips. (Well, okay, I wouldn't live very long but . . . )

If you have any extra rain once you send it to all of those ahead of me, we could use some, too. A fire broke out in the woods up near Chicken Mama's home today but, thankfully, it is contained already. Whew!

Candy - I wish I could! Now they're forecasting strong thunder storms late this afternoon. Normal weather now seems to be abnormal.

Erin - Weekends are my only real chance for trying things out. And look who's talking!!!

Jane - That's what I thought, but they are tender - probably due to the tapioca flour. Delish!

Sue - Yes ma'am. I am doing the rain mind-warp in your direction. I am sure I will be joining you in the crazy hose dance soon.

Nancy - Yes, as soon as I remember to bring it along when I'm on the computer!

Mama Pea - I won't even go into what I eat during the week. Better that you think I cook gourmet fare seven days. Frankly, I'd be right beside you, bag of chips in hand. What a way to go...

It seems as if you are the only one getting rain! They just bailed hay here yesterday (yippee!!!), but we didn't have enough rain to make it anywhere near a bumper crop, so the bales are going to be light, but of course, still cost the same :(
At least we've got our 1/2 year of hay scheduled for pickup on Friday.

Wow, talk about being busy!!
Your pancakes look great. Never heard of that kind before.

I love to see the frolic'in chicks. Oh gosh I miss my chickens! Please send some of that rain my way via MommaP.