While walking the dogs Saturday morning, some bloodthirsty insect managed to find its way under my t-shirt and bit me mightily just below the rib cage.  Ouchicus Maximus!  It swelled at its worst to almost 4 inches in diameter.  And it itched like a son-of-a-gun.  This is 36 hours later - (grossicus): 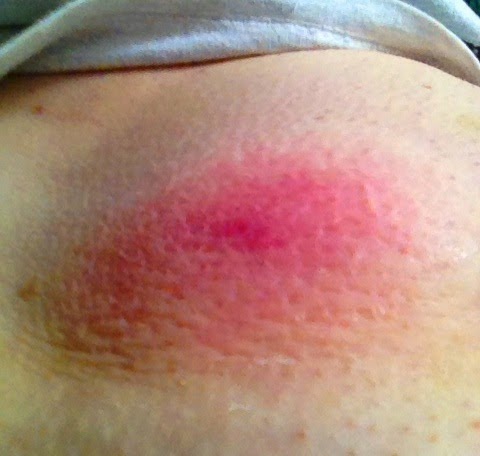 I should have called Carolyn to find out what nasty thing could cause this much damage...

I managed to rein in my test kitchen tendencies and only made two new things - one was a disappointment and one was amazingly good.  I had made the broccoli/kale version of Simply in Season's Zucchini and Tomato Pie.  I still don't have a ripe tomato...  It was bland and the kale was too chewy.  I would try it again with a lot of changes - less milk, more cheese, blanched veges.  The second recipe had been hovering around my consciousness for some weeks.  I'm not sure why, as there were no Russian genes invading my forefathers/mothers, as far as I know.  It was just one of those things - I read it, something clicked, and I HAD to try it.  One of my favorite blogs is Thrift at Home - written by a very versatile and talented mom.  I've been trying to come up with new ways to eat beets and this was a new one to me:  Shuba.  My beets were a mixture of chiogga and golden, so I didn't get that lovely pinkish topping.  But it was/is GOOD, or, as they say in the Old Country, voskhititel'nyy...

After taking Kyle in for an oil change - and finding out (not really a surprise, I was in denial) that he needed four new tires - I was not in the mood for much of anything.  So, I decided to shuffle the chickens.  I moved the Ostrich Chicks (aka the Langshans) to the small coop top.  This, it turned out, was a poorly thought-out idea.  It would have been fine, had not one of the OCs either purposefully or inadvertently fluttered down with the Tweenie Chicks.  Who then tormented him until he managed to pop out of the enclosure.  Right into the Big Chicken Yard.  That evening I heard all kinds of frantic peeping and there he was, all by his lonesome, in the front yard.  There wasn't much I could do at that point, other than herd him into the barberry bushes for shelter.  He was not in evidence this morning.  So, at o'dark thirty - my usual time of rising - I clipped on my headlamp and plucked the Tweenies out of their sleep and put them in with the Nuggets - more their own size and not given to torturing newcomers.  That left the OCs with their own little Shangri La.

I had hoped to finish off some sewing projects, but there is a problem with the tension on the bobbin thread and I'm too challenged to figure it out at present.

I need to take note of Pepper's remedy for all things stressful: 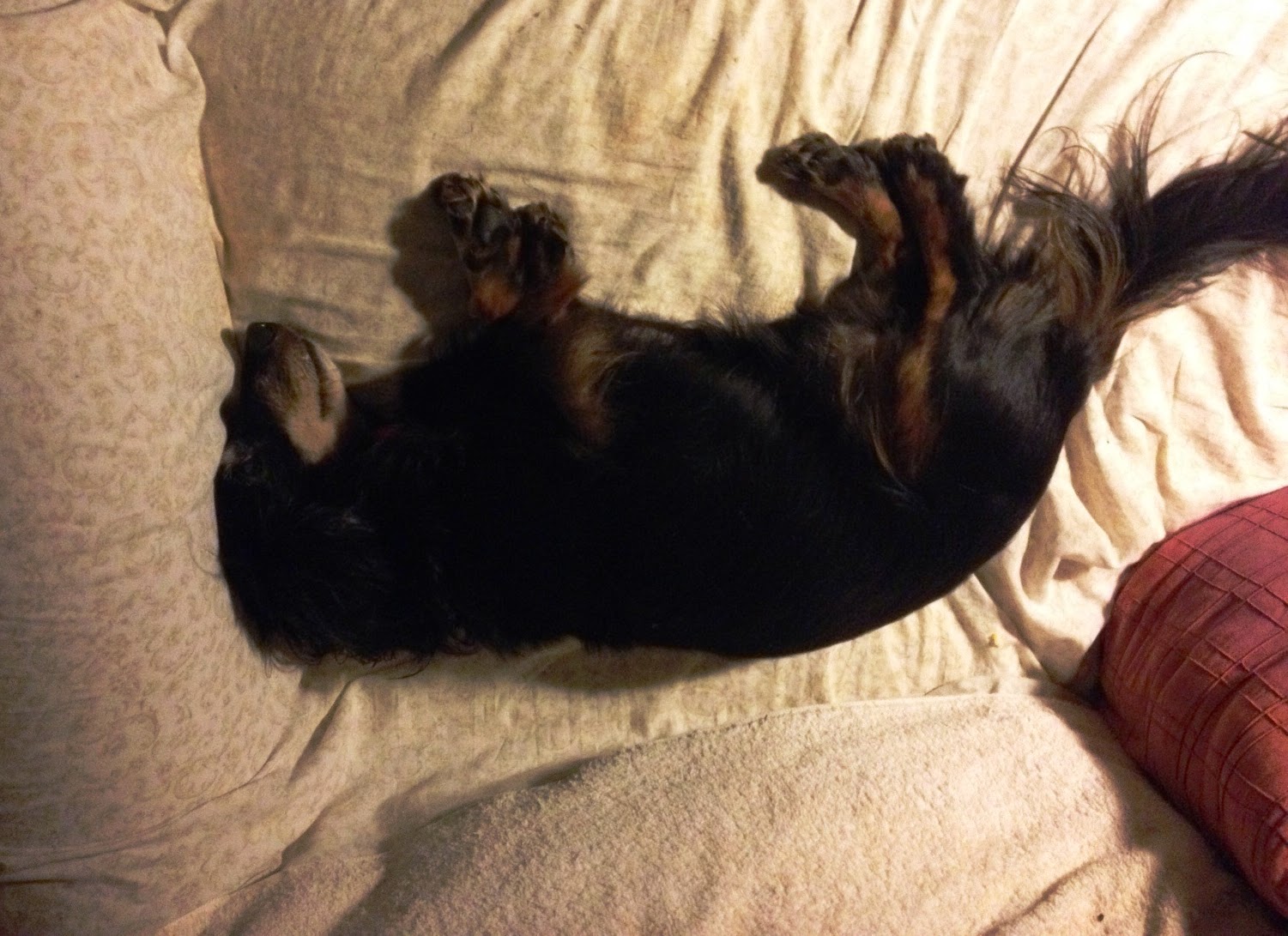 Ah, that dog has the right idea, ha ha!

that is one hell of a bite! did you ever figure out what bit you?

Freaking OUCH! Unfortunately (or, fortunately) I don't have much experience with insect stings other than Bald Faced Hornets and Scorpions so I'm zero-help with you on that front. But I do hope that it is healing quickly.
Pepper has the right idea. I may have to follow his lead shortly.

Do you need to have that monstrous swelling from the bite checked out? You sure did have some kind of an allergic reaction.

So what's with "Pepper?" He didn't like the new name you gave him and insisted his birth name was "Pepperoni" . . . which you've shortened to "Pepper?" I'm confused. (Nothing new on that front.)

Kristi - I should have named him Velcro!

Jaz - Isn't it? I had to check it for fang marks... Nope, never did figure out what it was. It had to have struck while I was on the move. Maybe a deer fly?

Carolyn - It was the itching that drove me crazy. I have never had anything itch that badly. And hope never to again.

Mama Pea - It's finally subsiding. I sure did react to it, though. I ran through an entire encyclopedia of names - he didn't react to anything but Pepper. I am wondering, now, whether that was his name all along (Pepperoni). Shows a lack of creative thinking, IMHO. Of course, being a dachshund, he rarely reacts to anything I call him. Or any call in his direction. Unless food is involved. (I can relate.)

This bite looks painful, and it looks as if you're reacting to whatever bit you.
And you don't see bite marks? Are you feeling okay, or do you feel a little sick, dizzy or anything? Be careful, you may need to get this checked out.

Sandy - Thank goodness it is abating and the swelling has gone down. I had given myself until this morning - if it hadn't changed, I was off to the clinic.

I got bitten by some kind of beetle thing in Montana on vacation. They flew out of a tree and bit me on the wrist and behind the knee. The one on the wrist was about as big around as my wrist and about 1/2 inch puffed up. The one on my leg was as big as a saucer and bright red. They both hurt like the dickens. I probably should have gone to the doctor because they were probable infected. I assumed it was an allergic reaction. All I know is that if I never go to Montana again it will be too soon! Hope you feel better soon.

Good grief thats horrible! Aloe Vera? Maybe its the year of the bug bite. I had a strange bee like thing literally fly into my foot as I stepped over a vine in the garden. [I tend to go barefoot] It got me in the side of the heel and it hurt horribly and looked much like your bite. Not quite so big. It hurt for days and kind of turned the skin papery and ITCHY! There are some critters out there that let you know not to mess with them if possible. Be careful and join Pepper! He seems to be well settled!