Tsking and tut-tutting and curmudgeonly moments. The War and Peace version.

Thanksgiving Day was overcast but a typical fall day.  I met up with my friend, Rosie, and we took a mesmerizing stroll through a wetland reserve in Bennington.  I got to try out my new app that identifies plants - watercress!  (none of which is shown...) 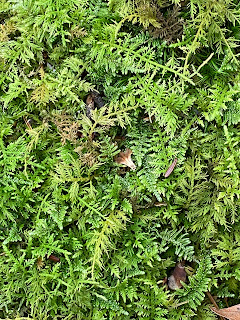 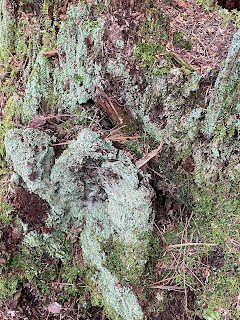 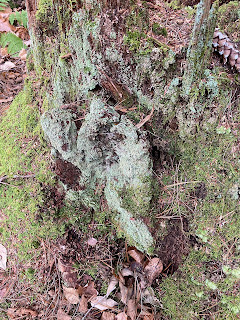 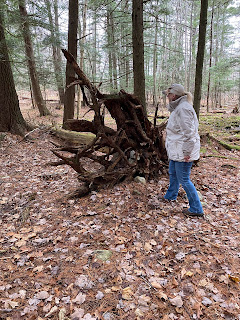 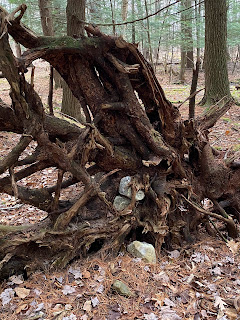 It was magical (except for the litter strewn about the grounds - insert tut-tut and tsk-tsk).   Fresh from the forest primeval, we tottered to mom's for a wonderful dinner.
Then, "black" Friday. 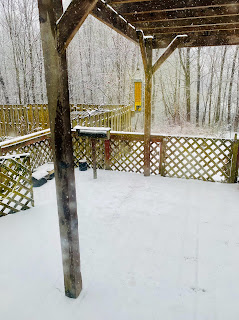 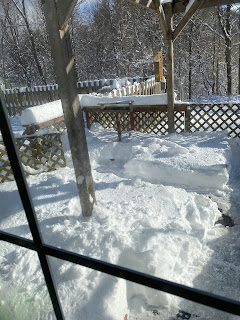 No pussy-footing about this winter.  BAM!  From zero to 8 inches overnight.  There was a lot of tut-tutting and tsk-tsking, as I had to locate boots, gloves and winter coat.  I did have the presence of mind to haul out the snow shovel.  Having apparently morphed into a frugal old lady, I did toy with the idea that I would shovel out my driveway by hand.  That was until I viewed the Hoover Dam of snow piled up at the end of the drive by the town's snow plow.  I am now, officially, a frugal, old, kvetching, curmudgeonly old lady.

The snow plow guy was called and I did a half-hearted job shoveling pathways until I realized that I had to reach the driveway in order to pay the plow guy.  There were many breaks.  There was more than one thought about apartment living in the south.

Job done(ish).  We hunkered in for the night.  This morning, sticking my nose out from underneath my self-made weighted blanket (fleece sheets+fleece blanket+down blanket+down comforter) I immediately got frostbite.  After shivering into robe and slippers and re-covering dogs, I found that the furnace (just serviced this past Tuesday) was not on.  Nor would it turn on.  A call to the furnace guy got me their new emergency set up consisting of some unfortunate guy who asked me a hundred questions - most of which were beside the point.  When he requested my email address, I snapped.  "No way, sonny!  You have no business with my email address!  I will not have you sending me spam and promotions that I do not want or need!"  There was a pause.  "Okay, ma'am (curmudgeon).  It is not mandatory.  A technician will contact you shortly."  I harumphed and went to get wool socks.

An hour later, with no call from the technician, I was working myself up for another telephone tirade when the dog alarm went off.  It was pitch black and the fleece curtains were drawn.  I shuffled to the window and could make out a small, white sedan in the driveway.  WTH?!   Gripping my robe against the cold, I opened the door and saw a dark figure trudging up the path, holding what looked like a pan.  The figure said "Shelly?"  I said, NO.  I am NOT Shelly and who the heck are you?  What he had actually said was, "Chilly?"  It was the son of the local fuel/furnace guy who had serviced the furnace earlier.  Sheesh.  An old lady with bed-head hair and eyeglasses askew, surrounded by yapping dogs.  I can only imagine.

Wonder what I will morph into next - Pippi Longstocking's grandmother?

P.S.  I was in such a snit that I forgot to add that he did - finally - fix the furnace.  In an effort to make nice after my crusty beginning, I gave him a cup of coffee.  I always forget that my coffee is S.T.R.O.N.G.  I swear his hair was standing on end when he left.  Probably thought I was trying to poison him.

I'm afraid I laughed all the way through this post. Sorry. Glad your furnace is back on now though.

We got more snow last night, and it continues to come down, but I think you have us beat at the moment. No furnace?? I hope the person who showed up in your driveway was able to remedy the situation. Do you have a woodstove? I know you have lots of lovely knitted socks to wear, but you definitely deserve to have your furnace on too. Let us know how it all worked out. Take care. -Jenn

Oh, dear. I hope your furnace is working properly now. I had a heck of a time getting the fire burning this morning, with much grumbling. The joys of winter.

Soooo ... Did the guy get your furnace up and running!
Wow! You really got a lot of snow! Don't they plow the roads for the town/city free for the residents? Evidently not ... Geez!

Well THAT was certainly an eventful day. So did the furnace get fixed?

And this is why I will not live where it snows.

Ahhhh, life is grand isn't it! Glad you have heat.

That is a big dump of snow for the first one! Glad you have heat again. Love the "dog alarm".

I had to laugh about the coffee. We drink it strong too. We are getting that nasty white stuff too. Makes a person stay inside for sure.

Too funny! I say - let that curmudgeon fly free!!!

That arrived in a rush!!
Glad your furnace is now sorted..chuckles about strong coffee 😎😄

I remember the last heating/cooling system I had installed. When it came time to turn on the cooling part for the first time one hot day, it wouldn't work. I called and complained and was told they hadn't charged the system up and would be there in a few days to do so. I gave them heck about not charging it up the preceding 6 weeks of mild weather and waiting until I called before taking action. They showed up an hour later.

I'm another one that laughed all through this post, especially at the strong coffee. Mine can curl hair too. LOL I am so glad the guy got your furnace going! Nothing funny about no heat in the Winter!

Well, you've certainly started this winter season with a bang! You know if you end up with piles and piles of snow and we here in Minnesota have ANOTHER winter with a piddling little amount, I'm going to pack my bags and head to your territory. Really, we moved here from Illinois icy winters so we would have snow so we could hibernate and relax during these dark months, but ever since we've finally gotten home and hearth to a point where we can comfortably do that . . . no snow! It's just not fair, I tell ya, it's not fair.