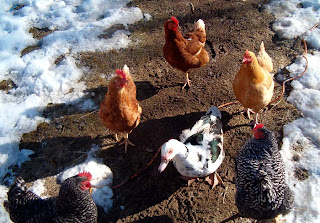 Can you find the odd one in the picture to the right? Dottie doesn't think she's odd. No matter how many times I have put her back in with her fellow ducks, she manages to escape back to the coop and her soul sisters. I actually think she is avoiding the drake, but I may be wrong. Dottie is a Muscovy with a penchant for white bread. I trained her to eat out of my hand - thinking I was so clever. Then I realized that Dottie had realized that she wouldn't have to beat off the chickens if I gave it directly to her. They're too giddy to focus on direct feeding techniques. I am humbled on a daily basis.
Posted by Susan at 8:46 PM

Ooooh, Dottie is pretty! Was she fully fledged out yet or was this her immature set of feathers?

She is a cutie. She is fully fledged, but she was such a pain in the butkus - she took over nesting boxes and harassed the hens. She is now at an all-duck home in Mass.