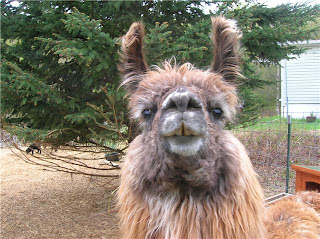 When I first got my sheep, there was the question of who would guard them from the large coyote population in my area. There's a lot of information out there -- and as many opinions -- and I did a lot of research. A Livestock Guard Dog (LGD) was out since it would cause problems with my own dogs and would mean providing more comprehensive shelter. Then there were guard donkeys. I loved the idea of a guard donkey -- one step closer to horse ownership. My dairy farmer neighbor happened to have two donkeys so I started hanging around making helpful conversation like, "I bet it's hard to take care of all those cows AND donkeys." I am so subtle. I really didn't have to convince him all that much and we were just on the brink of making the deal, when both donkeys brayed. I doubt if I could convey the eardrum-splitting volume of two donkeys braying in close proximity. I immediately was set upon by visions of my nearest neighbors calling 911, the ASPCA, the State Police, their cousin Vinny. And I was also aware that my buccolic, peaceful little spread would be so no longer. I backed out of the barn quickly under some pathetic cover like, "um, I have to go feed the chickens - I hear them calling me." My neighbor is very understanding. Long story not short enough, I ended up with a guard llama. He came from a llama breeder south of me at a bargain price - he was intact, bucktoothed, had an embarrassing name, and was small for his breed. He kept getting pushed aside from the grain by the bigger boys. When I first brought him home, his only interest in the sheep were running over them to get to the grain first. I wasn't impressed. Just as I was seriously considering turning him in for a REAL guard llama, the ewes lambed. Hoosier went from aloof to Uncle Hoosie. He sniffed the lambs thoroughly and went into guard llama mode and never looked back. He's a gem.
(Kudos to Connie for a great picture!)
Posted by Susan at 4:35 PM

So, thinking I might get one some day, what *IS* "guard llama mode"? How do they "protect and serve"?

P.S. Ya gotta tell me: what was his embarrassing name?

He stands, all alert, ears forward and just watches. Any movement and those banana ears go straight for it. They also have a weird, blood-curdling screech alarm. They named him Who's Yer Daddy? because they didn't know who jumped the fence and couldn't get him "papered". Poor orphan.