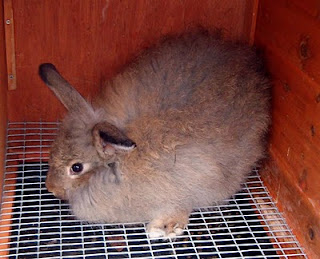 My friend/neighbor Kayten brought me a gift a couple of weeks ago.  When she called and asked, "are you going to be home? -- I have a present for you!"  I had an inkling of what was coming.  That, and she was coming from the Massachusetts Sheep and Woolcraft Fair.  When she and her husband, Nick, walked up my driveway carrying a small cardboard box, I couldn't help myself - I was excited!  In the box was a small, incredibly fluffy, 6 week old, male French/German Giant cross.  Adorable.  I haven't introduced him because I have been trying to find his name for the past two weeks.  Some of the names I tried out on him were:  Fluffy (eck), Sweet Baby James (too long), Alfie (taken - drake), Little Bit (he'd grow - quite a bit, I imagine), Bento (my Japanese phase), and on it went.

Since he is a youngster, I am taking the time to handle him and it has led me to an interesting place.  With my crowded schedule, full time job, and looming surgery, I was spending every morning and evening racing from one chore to the next, and trying to squeeze in every item on my to-do list that I could shoehorn into my limited at-home time.  One of the things I decided to squeeze in, was to spend a couple of minutes taking the bunny out of his hutch and holding him.  After the second morning, I found myself cuddling the little fat, warm fuzzball, leaning against the fence and watching the meanderings of the chickens.  A couple of minutes turned into 5, which turned into 10.  A few mornings ago, while I was stroking his lovely, soft fur and giving him a blow-by-blow description of the obviously loving relationship that has developed between Dottie and Alfie (censored to fit his young ears), I looked down and realized he was dozing in my arms.  I also noticed that his under-fur was a beautiful blue-gray color.  Little Blue.  I realized it had been ages since I had taken the time to enjoy my chickens, ducks, sheep, llama, cats and dogs.  I still have to fit a lot into my mornings, but I am enjoying my bit of down time with Blue, watching chicken television.
Posted by Susan at 8:00 AM