Girding ourselves in fleece.

I suppose I must throw in the towel and admit that summer is - sigh - over.  It was a crisp 30* this morning and the frost was on the pumpkins.  And the popcorn.  And the deck.

I had left Pepper sound asleep on the chair-and-a-half, swaddled in a towel, snoring away, when I went to bed.  At 2A, I was jolted out of sleep by pitiful wailing and scratchings at my bedroom door.  I opened it, looked down, and there was the pitiful black and tan mop, shivering and looking up mournfully.  Then he bolted through the door and flung himself at my bed.  I snuggled him between pillows and down comforter and he was out.  I took pity on him and let him sleep as long as he wanted - he lasted until 7!  Not a morning dog.

When I got up for good, I went into the living room to find Lovey trying to crawl under Scrappy.  I rummaged around and found Bernie's fleece coat (which she abhorred) and put it on Lovey.  After she decided that it was not going to attack and consumer her, she decided it was very nice.  I built a fire in the fireplace, made a cuppa and sat down with my knitting. 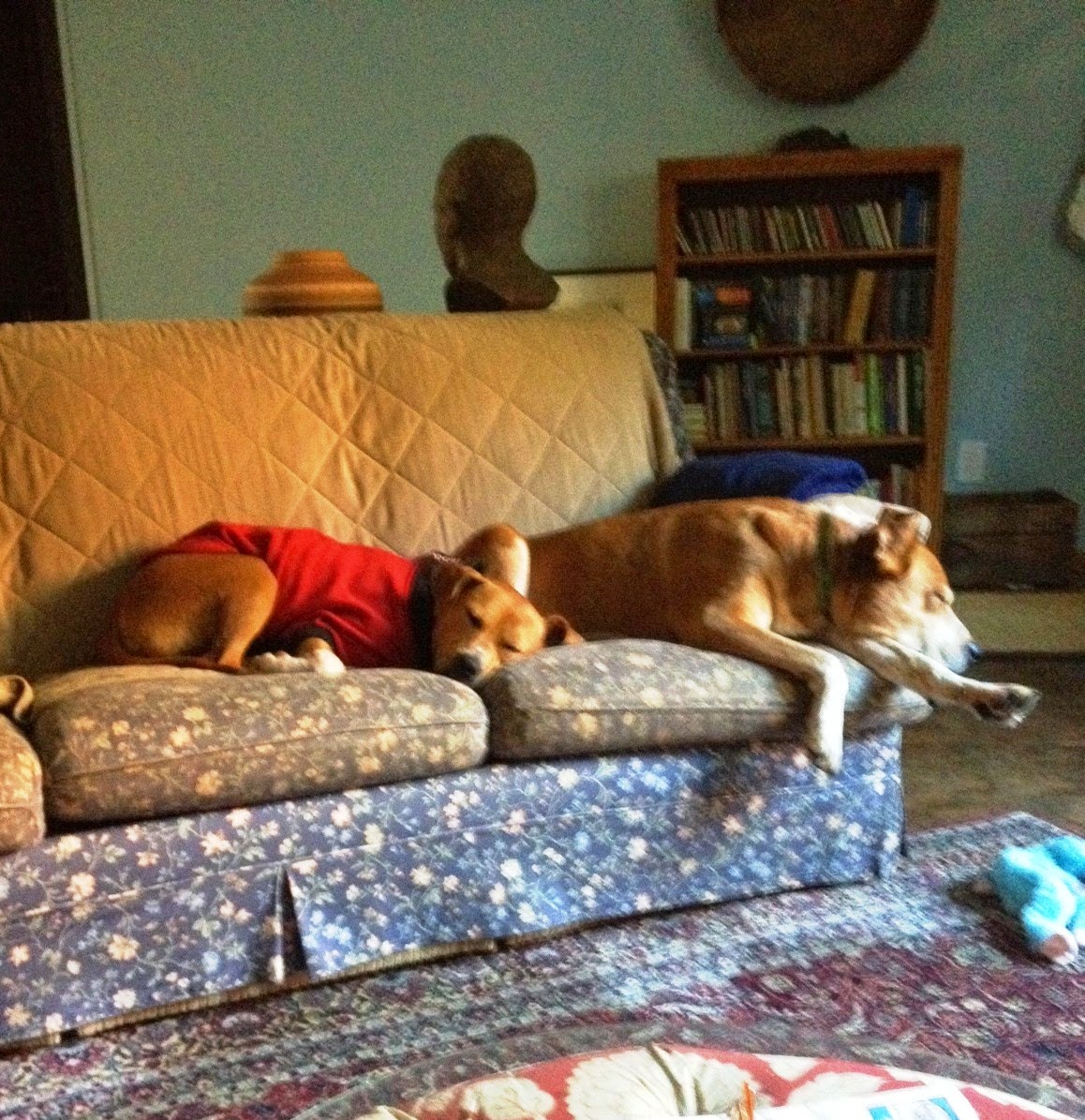 All, in all, a very fine start to a Monday morning.  Not counting having to clean up the mouse bits, strewn down the hall...
Posted by Susan at 2:12 PM

We have returned to "summer" and my hot flashes seem ever more vicious for having thought they were getting a cool-down. A frost would feel wonderful!

So, where is Pepper's hand-knit, extra-long alpaca sweater?

It got down to the low 40's here, wish we had a fireplace to start.
We actually went fishing in this cooler weather, ended up not catching anything because the lake was turning over.

It sounds to me like a nice relaxing Monday morning with the critters sleeping, and you enjoying your cuppa and knitting.

They say its a dogs life...don't I wish! Wonderful couch potatoes you have!

Mouse bits in the hall......I don't miss THOSE days-LOL!
It does sound like a relaxing start to a Monday--a nice fire and a warm drink. Perfect!
I fired up my furnace for the season yesterday. The house had finally reached that "deep chill" stage that old stone houses get in the fall and it was time!
I sure do envy you having a fireplace!

Jaz - I love those crisp mornings. Until I have to go out and work with water in it.

Michelle - Oy! I remember hot flashes - no fun in any weather.

Carolyn - Why, on the needles of course. The needles in my mind.

Nancy - It sure is nice sleeping weather. You're due for some cold morning soon, right?

Sandy - You are a hearty bunch, fishing in 40 degree weather! I love mornings like that. Wish there were more of them.

Fiona - I wish I could come back as my own dogs, but I don't think that is possible in any form. :)

Sue - I would love an old stone house! Is your house cool in the summer? The fireplace was the part that clinched the deal when first looked at it.

The house stays marvelous all summer. We don't have AC--don't need it.
And our heating costs are reasonable as well. It's just that "changing of the seasons" that it gets chill in here.
We talked about putting in a fireplace--but that's as far as we got.

I absolutely love the way you write about your animals! You do have a way with words, m'dear. Do YOU ever get to sit on your couch? Talk about a dog's life!!